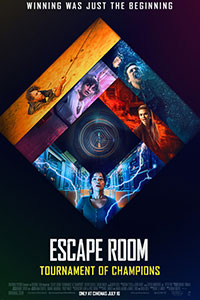 In a global pandemic rife with new variants and post-vaccine breakthrough cases, I often feel uncomfortable in a room with other people. Put me in a small room with five strangers, and my anxiety flares. If you lock the doors and turn getting out into an elaborate game of group problem solving, well, we’re talking panic attack territory. Escape rooms were all the craze before the world changed in early 2020. Like movie theaters and other niche entertainment, they’ve opened back up now. Still, watching Escape Room: Tournament of Champions, I felt a tinge of COVID-19’s conditioning. Why aren’t these people socially distancing or wearing masks? All of that close-proximity shouting is going to get someone sick. In any case, the characters in this horror sequel have worse things to worry about, like freeing themselves from elaborate booby-trapped rooms before their timer expires.

The original Escape Room debuted in 2019 and earned a pretty penny for Sony. Directed by Adam Robitel, the first movie’s conceit found six seemingly random strangers invited for after-work recreation in an escape room. But the gamemasters had something sinister planned; they intended to kill the participants, each of whom was a sole survivor of a past tragedy, in elaborately designed rooms that doubled as deathtraps. Among the roster of generic characters, the introverted bookworm Zoey (Taylor Russell, a promising lead) and underachiever Ben (Logan Miller) survived. We last saw Zoey planning to seek out and expose the gamemasters—a group of wealthy elitists who pay big bucks to watch people tortured in a hipster version of gladiatorial games. Ben, who appeared to have gotten his act together, agreed to join her. Made for around $9 million, it raked in $50 million at the domestic box office and another $100 million internationally. Hollywood logic tells us there must be a sequel, and fast.

Tournament of Champions flubs that layup. The screenplay, credited to four writers, couldn’t develop a better way to open the sequel than a long recap of everything that happened in Escape Room. Hyper-edited footage, presented almost like a trailer, refreshes the viewer about what happened before. The effect is something like entries in the Friday the 13th or Saw franchises, where the convoluted plots need recapping because no one was watching for the narrative. Like those movies, the filmmakers behind Escape Room realize their main draw is the elaborate ways they dispose of disposable characters. Each gimmicky room is more nightmarish and deadly than the last. The characters run about in a panic, trying to figure out the series of clues before their time’s up. Inevitably, they succumb in not-too-gruesome ways that preserve the PG-13 flavor.

The sequel’s roster of victims, headlined by Zoey and Ben, include a group of nondescript types without many gradations to speak of: Rachel (Holland Roden) cannot feel physical pain; Brianna (Indya Moore) is a social media influencer; Nathan (Thomas Cocquerel) serves in the priesthood; Theo (Carlito Olivero) is a family man. When the lot discovers their subway ride has become an escape room, Zoey and Ben, the latter of whom has reverted to his slacker appearance, lead the pack to free themselves. Unfortunately, after getting out of one room, they enter another room with a different dull theme (including a beach, a city street, a child’s playroom, etc.), and the victims fall at a rate of about one person per room. At 88 minutes, the movie spends most of its runtime following unwilling participants who shout clues at each other, fret over the diminishing time left on the clock, and scream in terror.

It’s all patched together in a way that allows the viewer to follow the A-to-B-to-C progression of clues in each room, so it’s watchable from moment to moment. But its pleasures are mostly superficial. The sloppy opening is paralleled by an unsatisfying conclusion that would rather build toward a third entry than provide any resolution. Add to this a lame third-act twist that reintroduces a character from the first movie who the viewer thought was dead (hint: Deborah Ann Woll is third billed) and an open-ended last scene, and the sequel seems to care most about creating a rapid-fire, off-kilter experience. That’s fine, I suppose, but it leaves you feeling empty and unfulfilled—less like you’ve been on a journey with the characters than you’ve been put through a blender on purée.

Escape Room and its sequel feel like Sony’s attempt to create their own version of Saw, except targeted at teens who will ensure a profit in the first-weekend box office. The franchise has all the same problems as Saw, too, since it’s compelled less by character motivations than crafting new and engrossing ways of staging death. Zoey’s mission of uncovering and confronting the people behind the escape rooms, as written in these movies, seems like a flimsy frame on which to hang this series. Meanwhile, the gamesmasters remain in the shadows to give viewers a mystery that keeps them coming back. It’s all rather banal stuff built around the idea of killing people in neat ways, and it might even be enjoyable if the filmmakers cared more about storytelling than concocting cool death rooms. However, its fast-paced nature prevents the material from leaving a lasting impression.