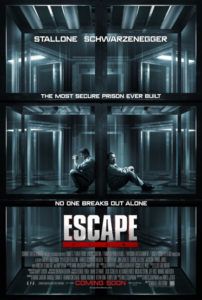 Designed to celebrate the 1980s and early ‘90s canon of actioners that starred Sylvester Stallone and Arnold Schwarzenegger in their heyday, Escape Plan finally brings these two muscle-bound heroes together, and with far more screen time than their brief appearances beside each other in The Expendables movies. Although their box office credibility has been rejuvenated as of late by that franchise, and not helped as much by their solo efforts such as Stallone’s Bullet to the Head and Schwarzenegger’s The Last Stand, the actors are twenty years past their prime. Had Escape Plan been released a few decades ago, it would have been a major event, reminiscent of those guilty pleasures like Demolition Man, Cliffhanger, and True Lies, where these veiny beefcakes face off against an over-the-top villain. Nevertheless, this capably made prison break fare offers one or two genuine thrills, and everything—warts and all—one might expect from a B-movie actioner.

With this in mind, one enters Escape Plan expecting ludicrous scenarios, corny one-liners, macho posturing, cheesy dialogue, senseless violence, and absurd story logic. And for the most part, the takes-it-self-seriously screenplay by Miles Chapman and Arnell Jesko delivers on all fronts. It begins with a neat enough idea: Stallone stars as Ray Breslin, a former lawyer who literally wrote the book (called “Compromising Correctional Institutional Security”) on prison security. Breslin runs a company that’s hired by the Federal Bureau of Prisons to test the security of their penitentiaries; he’s admitted into prisons as an inmate and, in short order, he escapes. After an impressive jailbreak in Colorado, his fourteenth assignment, Breslin is offered a job by the CIA at twice his usual salary to enter a privately funded “off the grid” prison designed to house the “worst of the worst” criminals.

Going against his strict set of security guidelines, Breslin agrees to the job and quickly discovers he’s in over his head thanks to the sadistic Warden Hobbes (Jim Caviezel). After being kidnapped and drugged, he awakes in a glass cube in an unknown location, and he’s ruthlessly beaten by cruel guards in black masks. He’s outmatched and has no choice but to team with fellow inmate Rottmayer (Schwarzenegger), a political prisoner in custody because he knows the identity of a modern-day Robin Hood. To gather information about the prison and their whereabouts, together, Breslin and Rottmayer stage fisticuffs (“You hit like a vegetarian,” Schwarzenegger announces, in the movie’s best line) and try to outwit their captors. Given that these two actors have rarely played brainy types, some of the developments are leaps. Meanwhile, Breslin’s company tries to locate him; concerned are his handler-cum-love-interest (Amy Ryan) and tech whiz (50 Cent, grossly miscast), whereas his shifty partner (Vincent D’Onofrio) is suspect.

Director Mikael Håfstrom limits his visual palette to varying shades of gray, giving Escape Plan a muddy look as opposed to the pseudo-futuristic style that was hoped for, but the look is rationalized once we learn where the prison is located. The production design is top-notch, even if the low-grade CGI is not. When the action gears up, Håfstrom over-edits the fight scenes and engages in an eye-rolling moment of slow-motion as Schwarzenegger turns, massive gun in hand, and unloads on a group of approaching goons like something out of Commando or Terminator 2. This, along with Schwarzenegger’s silly, laughable one-liner when the bad guy gets it, seems like obligatory moments tacked onto an otherwise interesting prison yarn if only to service the presence of its stars. The most involving parts of the movie involve Stallone and Schwarzenegger in the thick of it under Hobbes’ control, whereas the actual escape and underwhelming aftermath prove disappointing.

The story isn’t completely dumbed-down, with mentions of Blackwater, extraordinary rendition, and a scene of waterboarding to make us think about the real-world parallels. What’s surprising is how engaged the cast appears to be (with the exception of Sam Neill’s underwritten prison doctor role). Stallone and Schwarzenegger haven’t been this good in years, particularly the latter, who, in fact, delivers some impressive turns in his native tongue for a scene where he’s pretending to go mad. Schwarzenegger is usually just a presence and rarely acts, but his German-language tirade may be the superstar’s best moment of acting to date. Viewers will be shocked at Schwarzenegger’s invigoration and how he’s capable of showing emotion. Here’s hoping he gets more chances like this in the future. But after the finale degrades into a violent shootout and leaves us dissatisfied, not even solid portrayals by Stallone and Schwarzenegger make Escape Plan anything beyond a very, very guilty piece of actionized entertainment.