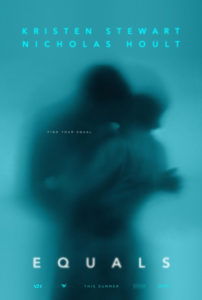 At some point before the oppressive dystopian future in Equals came into being, there were probably members of a reigning government who met to discuss forming a utopia. Someone in the room suggested that emotions should be legally restricted, avoiding the dangerous outbursts and war that led to their post-apocalyptic landscape. Certainly, there’s a degree of dark logic to limiting expression—our current world where the headlines contain an outpouring of hate crimes and terrorism could use a little less emotion and more measured rationality. But when the idea was proposed, everyone in the room should have hesitated and realized every utopia ultimately becomes a dystopia. After all, if there’s one thing every piece of dystopian fiction ever has taught us, it’s that people don’t like to have their emotions muffled, and they will ultimately rebel against it. And that’s just what happens in director Drake Doremus’ film, a story with more than a little in common with Logan’s Run or George Lucas’ early effort THX 1138.

With his last two films, Doremus has explored forbidden or complicated romances. Take Breath In (2013), about a foreign exchange student who beds down with her host family’s father, or Crazy Love (2011), about another foreign exchange student who’s banned from the U.S. after overstaying her visa. Those troubles seem quite arbitrary next to the setup in Equals, a futuristic world in which human emotions are suppressed by scientists just after birth. Not thinking about love or forbidden sexual activity provides outward serenity to the people of The Collective, a community of workers living in a honeycomb of sleek, gray architecture (real-world locations in Japan and Singapore serve the film’s futurist landscape). Citizens dress in bland, clinical suits; they share unisex bathrooms; their faces are expressionless and robotic; and they look about as lively as department store mannequins.

At the center are Silas (Nicholas Hoult) and Nia (Kristen Stewart). He’s an artist in the “speculative nonfiction” department; she’s a research writer. They’ve worked virtually side-by-side for years without incident. But suddenly Silas begins to suffer from the cornily-named SOS (“Switched On Syndrome”), meaning he’s experiencing emotions he shouldn’t be—feelings described as a “disease” or “defect” by official propaganda. He’s given inhibitors to prevent his new feelings, and eventually he’ll be carted off to an emotion asylum called the “den”. Until that happens, he begins to explore those emotions during long gazes at Nia. She responds with detached curiosity, until she reveals that she’s a “hider”—someone who has secretly managed her SOS without alerting authorities. As Silas and Nia begin to explore their newfound, prohibited feelings, they struggle to keep their forbidden love a secret.

Stewart does understated, loaded looks of restraint better than most performers her age. Though, one look at Nia and you would be a fool not to realize she had a wealth of emotion beneath the surface. If anyone was looking closely (hint: they are), they would see her greasy, slicked-back hair, hesitant smiles, and occasional looks of disgust about her emotionless society—and they’d rightly suspect something. This is less evident on Hoult, who’s performance is twitchier and nervous. Their performances are best in their brief moments of sensuality spent discovering a flood of emotions (affection, elation, lust, fear, etc.). On the margins, Guy Pearce has a small role as a long-troubled patient who counsels Silas, and Jacki Weaver cameos as another hider, yet both are considerable enough stars that their presence is more distracting than supporting.

Carried along by Sascha Ring and Dustin O’Halloran’s electronic score, the flatly composed visuals by cinematographer John Guleserian echo Equals’ form and function within its authoritarian space. Blue and gray tones occupy the earliest scenes of emotional airlessness, while later scenes feel warmer, all in an obvious way—although, not so obvious as the emotionally subdued black-and-white world of The Giver (2014), a clear source of inspiration for Equals screenwriter Nathan Parker, writer of Moon (2009). Fortunately, the film doesn’t descend into an actionized escape scenario like many of today’s dystopia tales (see everything from The Hunger Games to Divergent). Instead, the intentionally paced and tender romance considers a near tragic, even melodramatic finale.

Predictably Orwellian, Equals can be compared to a lot of different films (here’s another four: Stewart’s Twilight saga, a supernatural quartet about a forbidden romance in a highly regulated society). And while the narrative recalls countless works and plays out in ways you’ll surely see coming, Doremus’ production deserves top marks for its visual and technical package. Production designers Tino Schaedler and Katie Byron, working alongside costumers Alana Morshead and Abby O’Sullivan, create a world with spectacular intricacy, yet a simplicity appropriate for its lower budget. Where scanners and computerized systems of officialdom stand out, others, such as the design of neat-looking furniture and contraptions, hide in the backdrop. Unfortunately, the script doesn’t innovate much on the familiar scenario or offer a fresh perspective, leaving Equals to feel dramatically inert—and not in the way Doremus intended.