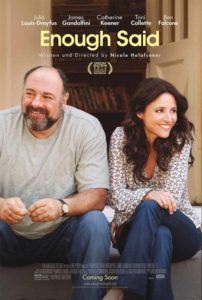 In the hands of another filmmaker, the setup for writer-director Nicole Holofcener’s Enough Said could have been turned into a deplorable, farcical mess starring stale performers like Kate Hudson and Josh Duhamel, filled with raunchy asides and immature silliness. Fortunately, that’s not the case. This film may be one of the best romantic comedies in years, filled with astute observations and situations involving grown-up relationships, witty banter, and characters you feel you know within minutes. Julia Louis-Dreyfus stars alongside the late, great James Gandolfini, whose presence adds a layer of ache to the already bittersweet material. They’re each playing a single, divorced, middle-aged parent with a child on the way to college and an ex living not too far away. Playing to the actors’ sometimes unexpected strengths, their characters are each funny, awkward, and full of mutual recognition for one another. Their chemistry is immediate, warming, and infectious.

After meeting at a party at which they both agree there’s no one around they’re attracted to, Eva (Louis-Dreyfus) agrees to go on a date with Albert (Gandolfini), because Why not? They live in L.A.’s West End in comfy homes that reflect their personalities, and despite their similar familial situations, they’re not an obvious love connection. A fifty-something massage therapist who hauls her heavy table to her clients’ homes, Eva has a good sense of humor about herself but uses it to defend—what’s later revealed to be—her emotional fragility. The portly Albert, a historian of classic television, has the same sense of humor and same vulnerabilities. He describes himself as a slob, “not like a dirty, hoarder slob—a normal, disorganized one.” They banter back and forth in what must be one of cinema’s most charming first date sequences, from a noisy restaurant to a frozen yogurt shop. It’s an unspectacular date but a quietly promising one.

At the same party where she met Albert, Eva also meets Marianne (Catherine Keener), a poet whose bohemian lifestyle Eva admires. She takes Marianne on as a client and soon Eva realizes Marianne is Albert’s ex-wife, and, rather than confess that she’s dating Albert, she can’t help but try to learn what Marianne found so disagreeable about him. As Marianne gripes about her ex, the qualities that Eva once found sexy and oddly charming about Albert turn into annoyances, influenced by her undue esteem for Marianne, and they in turn have a damaging effect on Eva and Albert’s otherwise budding relationship. Eva confesses her predicament to her best friend Sarah (Toni Collette) and her daughter, the refreshingly level-headed Ellen (Tracey Fairway). But Ellen is soon leaving for school, so Eva focuses her motherly attention on one of Ellen’s clingy friends (Tavi Gevinson), perhaps out of desperation and anticipatory loneliness.

Louis-Dreyfus plays Eva as good-humored and always willing to crack a joke at her own expense, but she’s a character who often puts on a smile. At the same time, she’s unabashedly uncensored and, curiously, honest, regardless of her deception throughout the film. Eva is lost, a single-parent divorcée trying to figure out what she wants and needs out of life. Snuggling up to Albert, she’s comfortable and immediately at home, but her regard for Marianne’s tepid opinions is ruining. On the other side, Gandolfini is wonderful as an average guy—the sort who, after their first date, invites Eva over for Sunday brunch and answers the door in his pajamas. He’s a teddy bear, and our enduring admiration for this talented actor enhances Albert’s pleasant and calming quality. Watching these two engage in comfortable wit proves amusing, but their personalities and tenderness for each other also wash over us in a tidal wave of easygoing compassion.

Holofcener has made a series of mature comedies (Walking and Talking, Friends With Money, Please Give) rooted in real-life characters comprised of imprecise behavior and social uncertainty. She specializes in truthful dialogue that emerges only after much emotional confusion and poor decisions. Her characters can be myopic and mean, but never are they unlikeable or unfamiliar. We quickly fall into the steady pace of her work, especially with Enough Said, growing comfortable with the characters, warts and all. We could easily imagine sitting on a cozy couch under a blanket with either Eva or Albert, enjoying a glass of wine and talking about nothing in particular, yet it would be a conversation that would mean much. Despite the relaxed way she approaches her characters, the profundity behind Holofcener’s film is remarkable.

As Marianne feeds Eva more and more information about Albert, how he’s clumsy in bed, or the annoying way he eats guacamole, the self-destructive nature of Eva’s listening becomes hugely affecting for the audience. What is initially an ill-broken social boundary for situational amusement becomes a painful betrayal. Holofcener creates such a warm place between Eva and Albert early on that, when it’s threatened, the dramatic impact is surprising and impossible to deny. And yet, Enough Said maintains its non-abrasive, endearing quality throughout even the emotional heights, resisting over-the-top swells or last-minute reconciliations, at least in their traditional romantic comedy form. Holofcener’s integrity as a filmmaker retains humanity and naturalism until the endearing, satisfying last scene, while throughout, her film is humorous, filled with clever and funny dialogue, and characters to which we feel a significant closeness.