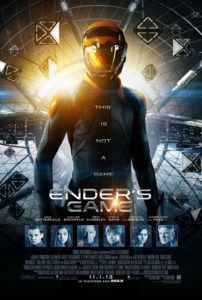 Ender’s Game, based on Orson Scott Card’s novel from 1985, is a science-fiction benchmark that has endured a long journey to the screen. The author has jealously kept the rights to his book to ensure its adaptation would meet his approval, even writing versions of the script himself for Hollywood over the years. In the end, Gavin Hood (X-Men Origins: Wolverine) wrote and directed the big-screen translation, with Card serving as a co-producer and uncredited co-writer. Made for $110 million and released by Summit Entertainment, the studio behind the Twilight saga, Card has issued his stamp of approval on this blockbuster-sized picture, following a whiz kid at an army boot camp for teen space soldiers. But this expensive-looking-yet-uninspired take is devoid of the necessary emotional underpinnings that would have transformed it into a sustainable franchise. For a film about a character whose ability to empathize with his enemy is his greatest strength, Ender’s Game contains little empathy for its titular hero.

The film begins about 50 years after an alien invasion on Earth. The culprits, an insectoid race called Formics, were stopped single-handedly by war hero Mazer Rackham (Ben Kingsley), but they still survive on their own home planet. On Earth, the fearful International Fleet prepares for another Formic invasion by training children. As head of the Fleet’s Battle School, Col. Hyrum Graff (Harrison Ford) explains, children can process information, logic, and strategy faster than any adult, and therefore children will command the best armies. Worthy candidates train rigorously for acceptance into the program. A third-born on a population-controlled world, the brilliant young strategist Ender Wiggin (Asa Butterfield, from Hugo) has been accepted, living up to impossible expectations. His violence-prone brother Peter (Jimmy Jax Pinchak) and empathetic sister Valentine (Abigail Breslin) both flunked out for their respective extremes, while Ender is a happy medium: he’s at times ruthlessly violent and yet empathetic enough to understand his enemy.

In an early scene, Ender beats a bully to the ground in an act of strategy—not only to win the fight but to warn off anyone else who might bully him. That’s also the strategy of Col. Graff, to stop the ant-like Formic threat so they never attack again. For Ender, the road from “Launchie” to graduation involves training with teams called “armies” with names like “Salamanders” and “Dragons” in a zero-gravity arena called the “Battle Room”, where the rules of the game involve laser guns and floating in open-air combat, the strategies of the competing teams not always apparent. Expositional dialogue between Graff and his chief psychologist Major Anderson (Viola Davis) testifies to Ender’s brilliance, and our young hero’s victories in the constant Battle Room competitions earn him no end of promotions. Ender makes friends along the way, including fellow strategist Bean (Aramis Knight) and an undeveloped romance with sharpshooter Petra (Hailee Steinfeld, Oscar nominee from True Grit), but their relationships never become intractable bonds onscreen. There’s no fun or play or love between the young cadets—the usual troubles of hormone-crazed adolescent life are virtually nonexistent—and Ender himself is like a robotic drone carrying out his mission with only superficial complaints of questions about his orders.

Graff, meanwhile, feels an intangible pressure building to pick a sole candidate as the leader in the seemingly inevitable war against the Formics. You might ask why Graff is in such a hurry to stop the Formics, who don’t seem to be attacking anytime soon. But no one bothers to question Graff’s authority in any meaningful way. The plot leads to a twist finale that shouldn’t be spoiled for the uninitiated; however, it’s enough to say that Ender’s role in genocide comes into question. There’s a powerful conversation that might result from Ender’s Game, one that might compare Ender to Adolf Hitler or, conversely, might consider him a helpless victim when it comes to his role in the climax. Either way, Hood hasn’t developed the stony character enough to make his audience care about the individual, just the implications of the situation. Narration and animated vision quests into a Battle School video “mind game” attempt to unlock what’s going on in Ender’s head, except it’s all delivered in presumptions and Psychology 101 explanations. Of course, the horrifying experience of Battle School itself reflects the grave deception of the story, but the film leaves the audience with a feeling of emptiness about it all.

Just as J.K. Rowling probably lifted her Quidditch tournaments for the Harry Potter series from the zero-gravity tournaments in the Battle Room, Card most likely lifted the militaristic training and bug-centric aliens from Robert A. Heinlein’s 1959 book Starship Troopers. To be sure, Ender’s Game looks like the lovechild of the most games-ridden segments of Harry Potter and the Goblet of Fire and Paul Verhoeven’s 1997 cornball version of Heinlein’s book—an underrated parody of army recruitment tactics. Except, the major difference between Hood’s film and the other adaptations mentioned is that the others had enough sense to make their films enjoyable, even if, in the latter example, it was in a campy way. Despite expert special FX and CGI, Ender’s Game has the unfortunate quality of being a complete bore, with little dramatic depth given to Ender by the script and few touches to make us sympathize with this cold, often unemotional protagonist. While the performances by the star-studded cast are all carried out by expert talents, the material never resonates.

Ender’s Game feels like a joyless video game experience, complete with levels of increasing difficulty and a main character who never really faces a true conflict. Watching Ender succeed endlessly at whatever task is placed in front of him makes for a narrative without an emotional pull. Worse, the final few scenes following the climax serve only as an unneeded afterthought intended to create a path for a sequel. Summit Entertainment has made a concerted effort to transform this film into the first of an ongoing franchise. Card wrote some 13 novels and several short stories about these characters, so there’s no shortage of source material. Whether or not there’s a sequel is based solely on the performance of this first entry. And those who look beyond Card’s outspoken views against homosexuality and same-sex marriages may find the film watchable, if not enhanced by an unwavering devotion to the text, but the prospects of the material in this form becoming a sensation and launching a venerable franchise are unlikely, if only because of the film’s lack of cinematic “fun” or feeling characters.