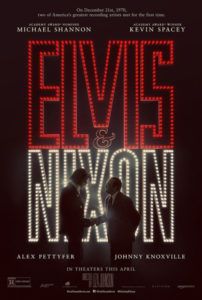 According to the end titles of Elvis & Nixon, the iconic photograph taken of Elvis Presley and Richard Nixon during their secret December 21, 1970 meeting remains one of the most requested images in the National Archives. Their encounter was kept under wraps until 1972 when the story broke in the media, and ever since there’s been wild speculation as to what the meeting entailed. It’s also the impetus behind the second Amazon Studios release after last year’s underseen Spike Lee joint Chi-Raq. And while seeing these noted figures, one beloved and the other largely despised, standing across from one another makes for a fascinating, almost surreal visual juxtaposition, it’s a novelty idea. Director Liza Johnson extends the novelty for just under 90 minutes.

In a demonstration of stunt casting, Elvis is played by the ever-intense Michael Shannon, here delivering a soft voice and imposing presence. Even underneath dyed black hair and a large collar, and even behind golden sunglasses and sideburns, Shannon looks nothing like Elvis. Nor does Kevin Spacey have the almost cartoonishly elongated nose and facial type of Nixon. Both actors have their respective characters’ vocal inflections down, but their casting nonetheless feels like a joke unto itself—like a stage play gimmick brought to the screen. Shannon controls most of the film, since it’s his Elvis who watches television in the opening scene until he becomes sickened by the influence of drugs on the American public, epitomized by hippies, communism, and The Beatles. So, as any larger-than-life entertainer would do under similar conditions, Elvis demands an audience with the President to become a “federal agent-at-large”.

A former husband-and-wife team, screenwriters Joey and Hanala Sagal partnered with actor-turned-writer Cary Elwes to ponder what might have occurred when the King and the President met in the Oval Office. But rather than focus on the titular characters, the film spends about an hour establishing the periphery players that made it happen. Most of the screentime revolves around Elvis’ friends, Jerry Schilling (Alex Pettyfer) and Sonny (Johnny Knoxville), particularly the former and his reluctance to help Elvis. Jerry has his own personal life to worry about back in Los Angeles; nevertheless, he arranges the impromptu face-to-face by working with Nixon’s starstruck personal staff, Bud Krogh (Colin Hanks) and Dwight Chapin (Evan Peters), in a period before Nixon’s rampant paranoia manifested itself in the form of tape recorders. In other words, there’s no record of what Elvis and Nixon discussed because the President wasn’t taping yet.

The screenplay offers a few tender moments between them, such as Elvis’ curious mirror-confession about his still-born identical twin brother, or the amusing way in which Nixon panders to his daughter’s request for an autograph. Their conversation’s thin dimensionality is wasted, however, because the filmmakers treat the material as the wackiest meeting to occur in the Oval Office, but it isn’t written as a wacky comedy. Granted, Elvis takes from a forbidden bowl of M&Ms and drinks from a reserved bottle of Dr. Pepper, while Nixon seems ready to begin a lesson in karate. Elvis’ penchant for guns and devotion to the absurd idea that he’s going to reinforce anti-drug laws is amusing (especially given his affinity for such drugs over the next seven years until his death), but the film’s playfulness is too restrained. Certainly the two lead actors appear to be having fun in their roles, while the supporting cast seems to be having less fun (with the exception of Hanks) because they’re less compelling.

Cinematographer Terry Stacey shoots in muted tones, while editors Michael Taylor and Sabine Hoffman incorporate occasional stock footage of Washington D.C. for effect. But aside from the cast members, Johnson’s production doesn’t feel truly cinematic and would probably play better on the small screen. Ironically enough, the film would have played better if, like Robert Altman’s Secret Honor (1984), it confined the proceedings inside the Oval Office, almost like a one-act play with only Elvis and Nixon as characters. As is, Elvis & Nixon doesn’t have the guts to embrace the full degree of potential silliness between these two men and their personas; it saddles us with the far less interesting characters on the sidelines and prolongs the eventual meeting, building it up until it can’t help but feel underwhelming as a whole.