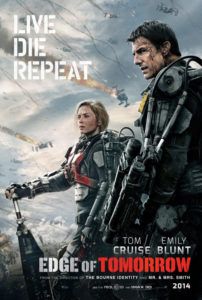 From the persistent time-looping setup of the late Harold Ramis’ classic Groundhog Day to the metallic exoskeleton armor warn by soldiers in a futuristic alien invasion war, Edge of Tomorrow draws something smart, exciting, and innovative out of otherwise formulaic material. Undeniably, there’s much about director Doug Liman’s imaginative big-budget spectacle that sounds familiar, but its composed with such velocity and startling humor that “derivative” becomes too negative a word to describe a film this exciting and satisfying. Tom Cruise stars alongside Emily Blunt in the skillfully made picture, which plays out like a great videogame yarn in its use of “respawning” after every death. Here, the player, in this case Cruise’s unlikely hero, learns from his repeated mistakes in battle until he achieves victory. But the narrative also blends history and science-fiction fantasy in intriguing and unexpected ways, ever with a touch of wit and exhilaration that carries the film’s infectious, cyclical momentum.

Based on the Japanese graphic novel All You Need is Kill by Hiroshi Sakurazaka, the film opens with a barrage of TV newscasts in which army spin-doctor Major William Cage (Cruise) sells the notion of joining the United Defense Force in a European campaign against alien invaders called “Mimics”—creatures on the verge of a global takeover. The Mimics are faster-moving versions of the octopus-like robots from The Matrix, except alive, and they’re spreading across the planet. To gather footage of his presumed victory on the frontline in France, war spokesperson General Brigham (Brendan Gleeson) assigns the cowardly Cage to join the grunts on the battlefield. A marketing rep and not a soldier, Cage laughs off the suggestion. “I do this to avoid doing that,” he tells the General, who isn’t laughing. Cage nervously clarifies, “Can’t stand the sight of blood. Not so much as a paper cut.” With no tolerance for cowardice, Brigham has Cage arrested for desertion and shipped out under the tutelage of Master Sergeant Farell (Bill Paxton) and the dogfaces of J-Squad for a single day of preparation before the attack.

Once on the battlefield, it takes only moments for Cage to die in the chaos when he ignites an explosive on a rare blue Mimic known as an “Alpha”. Cage dies with blue alien blood burning through his face like acid. But in that moment he absorbs the Alpha’s unique power to reset time, a skill that makes them “a spectacularly evolved, world-conquering organism.” Cage awakens back on the base, meets Farell once more for the first time, and dies all over again in combat. This happens over and over, certainly dozens, but probably hundreds of times, each respawn allowing Cage to gain more applied knowledge about his situation and survive longer, tweaking his movements to become increasingly resourceful. Along the way, he becomes entangled with war figurehead Rita Vrataski (Blunt), known as Full Metal Bitch, a hero from the humans’ victory at Verdun. Rita once had Cage’s ability too, but she lost it after a blood transfusion filtered the alien power away. Because she knows what he’s going through first-hand, Rita trains Cage, and together the two plan to win the war.

During Cage’s training and their gradual progress, screenwriters Jez and John-Henry Butterworth, along with Christopher McQuarrie (who’s directing Cruise in the fifth Mission: Impossible film), have fun with the live-die-repeat concept. A number of deaths often play out in hilarious or improbable ways, whereas Rita doesn’t hesitate to shoot Cage in the head should he suddenly break a leg or impede their progress. Their relationship is unique and compelling, the sexual chemistry between them just under the surface. And just like the most interesting and endearing conflict in Groundhog Day, whenever Cage respawns it results in Rita’s perspective on their relationship resetting. Whatever progress Cage makes with her on an emotional level is erased, and though he gets to know certain aspects about her, other parts remain frustratingly out of reach and aching with romantic tragedy. Blunt smolders in her role, coolly delivering a strong and sexy heroine on par with James Cameron-created equivalents—Linda Hamilton in The Terminator and Sigourney Weaver’s no-bullshit version of Ripley in Aliens.

Although audiences have seen Cruise battling aliens and time-twisting scenarios before, most recently in Oblivion, but to better effect in War of the Worlds and Minority Report, he was made for this kind of actionized material. Much like his father role in War of the Worlds, Cruise plays a reluctant hero, someone forced into an impossible situation and rendered all the more sympathetic for his very human disinclination toward death. Once he’s thrust into battle and has trained enough to expertly maneuver his way around every foreseen obstacle, he’s just as magnetic to watch here as in his best roles—and as smiley and charismatic as his turn in Jerry Maguire. The film is also a personal best for Liman, who helmed actioners like The Bourne Identity and Mr. & Mrs. Smith. Liman’s kinetic and rampant visual style heightens the action quotient even further, and the lightning-fast editing by James Herbert, above all in the middle section of the film where Cage’s deaths are more frequent, effectively delivers a few, precisely chosen shots to communicate the failure of another respawn.

Somehow deepened by a faint allusion to Allied Forces teaming up against Nazis for the D-Day charge on Normandy’s Omaha Beach, Edge of Tomorrow contains escapist entertainment value and a dark sense of humor about death. To be sure, this isn’t Steven Spielberg’s Saving Private Ryan, despite the visual citations present in Liman’s approach and throughout the overall story. In fact, regardless of the various other films that Edge of Tomorrow could be compared to, the end result feels strangely unique and not for a moment during its two-hour runtime does it lose the audience to thoughts of its influences. Once the pulse starts pounding, the film’s temporal wheelhouse doesn’t slow and remains breathlessly engaging until the final, simple, but effective last shot that springs hope for the film’s somewhat underdeveloped love story. All the same, Liman, Cruise, and Blunt unleash an exciting summer blockbuster whose repetitious strokes are contagious and thrillingly employed.