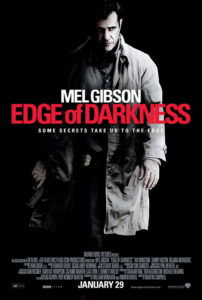 Hero cop takes down Evil Corporation. That would be the headline the day after, had the events in Edge of Darkness actually taken place. What occurs in the movie is never more complicated than that description because it doesn’t have to be. Some thrillers try too hard to complicate things with twisting scenarios and political commentaries, so it’s refreshing to see a mystery that unfolds with all the force of an arrow moving forward to a foreseeable but satisfying target. Marking the return of Mel Gibson to a leading man status, the actor’s first foray into acting since 2002, the movie dishes out a fierce thriller that doesn’t disappoint.

Gibson plays Boston cop Thomas Craven, whose wife died when their daughter Emma (Bojana Novakovic) was very young. Emma is grown up now and somewhat estranged. Unexpectedly, she returns home for a visit after a long time away. She’s visibly sick, and Craven believes she must be pregnant. When her nose begins to bleed, it’s clear she’s not pregnant. Emma panics, saying they need to get to a hospital, and that there’s much she needs to tell him. But as they’re leaving, someone outside yells “Craven!” and shoots Emma dead. The police investigation proceeds on the assumption that someone from Det. Craven’s past targeted him for assassination but just shot Emma instead. As Craven looks into Emma’s life, to learn about the woman his little girl grew into, he begins to believe she was indeed the intended target. At the center of his curiosity resides her employer, the nuclear manufacturer Northmoor, headed by its menacing chairman, Jack Bennett (Danny Huston).

To say anything more about this Evil Corporation would betray you, the viewer, of discovering its secrets for yourself. Suffice it to say they’re into some shady deals and illegal activities, all which lead back to a silent partner in the government. On the periphery, the ever-cool actor Ray Winstone plays a mysterious agent of sorts, named Jedburgh. He introduces himself to Craven, tells him he knows about Northmoor, that in a roundabout way he works for the government, but the audience isn’t quite sure why he’s there. Was he sent to kill Craven for poking his nose into things he shouldn’t? Does Jedburgh sympathize with our hero? Winstone is wonderful at keeping his distant character interesting, yet ambiguous. And when his teeter-tottering finally ends in the last scenes, it offers the most gratifying moment of the movie.

It’s important to note that the movie doesn’t take itself seriously, in that there’s never an intended sense of realism, though director Martin Campbell and cinematographer Phil Meheux present the picture in a straightforward dramatic atmosphere, without heavy stylization tonally or technically. The plot tells you this is a fantasy through the catharsis of a good, hard, unfeasible thriller. This is a story where everyone who’s supposed to get their comeuppance does. This is a story where the bad guys are housed in a massive evil genius lair on a hill, and they have no end of resources at their disposal, including armed goons, and yet the lone hero is somehow able to take them down. It’s no wonder Warner Bros. selected Campbell; having directed the James Bond movies GoldenEye and Casino Royale, he’s familiar with this type of yarn.

In a Lee Marvin or Robert Ryan-esque role, complete with crease-faced grittiness, Gibson serves up a ferocious, determined performance. It’s reminiscent of many of his earlier roles, most notably Porter from the underrated Payback. Craven is uncomplicated and determined, and there’s something appealing about a character that you know completely within an instant of meeting him. Some will have a hard time with Gibson, given his generally unforgivable persona offscreen; but at some point, viewers just have to look at a movie as a movie, and just forget all the bad behavior of celebrities. Here, Gibson allows us to do that quite easily, reminding us why he’s been a likable screen presence all these years.

The outcome is rather like Taken, with a father tracking the people who wronged his daughter, leaving a pile of bodies behind him during his inevitable clobbering of the organization responsible. Both films rest on the shoulders of their lead actor, and both contain impossible, even absurd circumstances. But they’re both enjoyable movies. The plot of Edge of Darkness may reveal one or two convoluted notions of conspiracy, but those are easily forgiven for the sake of its entertainment value and the grim tone suggested by the title. And when it’s all over, you’ll find yourself loading your rental queue with Mel Gibson titles, not to mention anticipating his next one.