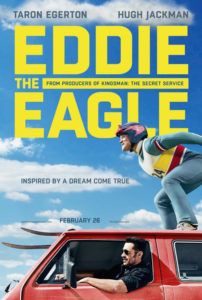 Something about the 1988 Winter Olympics in Calgary attracted underdog athletes who, despite going home without a medal, earned national renown. Remember Disney’s Cool Runnings, the John Candy starrer from 1993 about an unlikely Jamaican bobsled team? The real-life team took part in the 1988 competition. And now there’s Eddie the Eagle about Michael “Eddie” Edwards, a quirky-but-determined novice who decides to qualify himself in ski jumping. Edwards also participated in the 1988 Winter Games and, much like the Jamaican bobsledders, went home without a gold, silver, or even bronze metal. But the fact that they’re longshots who made it to the Olympics at all makes these people and their stories inspiring. They suggest anything can be accomplished if you want it bad enough.

Then again, Eddie the Eagle follows a timeworn formula adopted by every sports movie since, well, ever. It’s too bad the filmmakers didn’t see fit to take the same risks as their subject and try something different. Director Dexter Fletcher’s presentation follows the annoyingly safe script by Sean Macaulay and Simon Kelton, altering the true story to fit the specifications required by most sports movies. Taron Egerton plays Edwards behind thick glasses and goofy mannerisms. He’s a British oddball whose oddities aren’t really explored so much as pointed out. He’s an innocent, affable, childlike man; he’s guileless, while also apparently devoid of any negative feelings or sexual desire. Egerton’s devotion to the role is commendable, but it’s also a character with no more than two dimensions. Having grown up infirmed with leg and knee complications, Eddie has long been told by stodgy Powers That Be (Tim McInnerny) and his blue-collar father (Keith Allen) that he’ll never be an athlete, while his mum (Jo Hartley) supports her son’s obsession with the Olympics.

When the 24-year-old Eddie sets his sights on ski jumping (an event not pursued in the Olympics by Great Britain since 1929), he heads to Germany to train. Everyone thinks he’s crazy for doing so. Much like Cool Runnings, this movie’s unlikely champion finds a former Olympian, now washed-up, to become his trainer. Eddie gradually befriends the jumping facility’s attendant, Bronson Peary (Hugh Jackman), a former ski jumper who smokes and drinks too much. Bronson soon agrees to train Eddie and, after some astonishingly quick progress (most ski jumpers begin training at age 6), Eddie works his way up from the 15-meter jump to the 70-meter. Meanwhile, everyone in the movie keeps saying Bronson has hit rock-bottom, but the character is written without much personal conflict to overcome. He has some regrets that get resolved later, vicariously, through Eddie. But the writers don’t even offer us that otherwise obligatory scene where the coach’s substance abuse causes him to let our hero down, and in time either makes it up to him or gives our hero the solidarity to proceed alone.

Meanwhile, the British Olympic committee doesn’t want Eddie to jump. “You’re not Olympic material,” he’s told. Eddie keeps running into oppositions and momentary failures. But it’s nothing a few training montages can’t solve. Given the 1980s setting, Gary Barlow’s soundtrack includes period-appropriate gems by Hall & Oates and other ‘80s pop stars. Matthew Margeson’s intentionally corny synth score is appropriate, if a little too self-aware. Consider how almost every time Eddie races down a jump ramp, a synth tone crescendos him into the air. That sort of aural trick is funny the first time, but becomes as monotonous and one-note as the main character, whose unwavering drive is inspirational. But it leaves us questioning why Eddie has latched onto the idea of ski jumping. The movie offers no explanation other than Eddie is a lovable weirdo. For many, that will be enough.

Eddie the Eagle was produced by Matthew Vaughn. Egerton (star of Vaughn’s popular favorite Kingsman: The Secret Service) and Jackman (who’s worked with Vaughn on X-Men films) are both serviceable in their underwritten roles, while the momentary appearances of Jim Broadbent as an announcer and Christopher Walken as Bronson’s mentor seem out of place. Fletcher and Vaughn could have offered a far more idiosyncratic or searching story to explore their peculiar protagonist, but instead they’ve played it very, very safe. Viewers of Eddie the Eagle will anticipate every beat, not that its approach prevents the movie from being effective. Sports movies have a formula for a reason—it’s often successful. Here, the audience is so distracted by the movie’s failure to live up to its potential that the usually entertaining formula is transparent and disappointing.