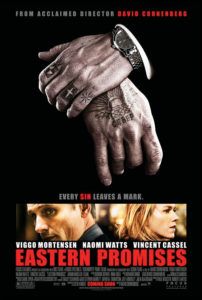 David Cronenberg’s body of work consistently surprises, which shouldn’t be the case, as I consider myself a devoted fan. Aside from his earliest work before The Brood, which has low budgets and poor acting that I just can’t get by, I expect to enjoy his film, and usually do, but never in the manner I had expected. Eastern Promises offers an unforeseen emotional core, when normally Cronenberg’s emotional draw remains muted or detached. In this film, he sustains his potent, pensive temperament, but with more melodramatic appeal than his previous works have offered. The story follows the London-based Vory V Zakone Russian crime family, led by Semyon (Armin Mueller-Stahl), a man who seems to have a tame disposition at first. His lavish restaurant is the front for his group’s activities, with his son Kirill (Vincent Cassel) wildly following in his father’s footsteps. Behind Kirill is “the driver” named Nikolai (Viggo Mortensen), a low-authority Russian criminal who knows how to get rid of people, as well as dispose of bodies.

Naomi Watts plays British midwife Anna, a woman of Russian blood who enters into Semyon’s world when a 14- year-old pregnant prostitute dies in her hospital, with apparent heroin needle marks up and down her arms. The doctors remove a baby from her womb just before the girl dies. Anna finds a Russian-language diary in the girl’s purse, with a card to Semyon’s restaurant in its pages. When Anna meets the charming old man, his memory can’t recall such a girl. If Anna brings the diary, he says, he will translate it for her and find out where the baby belongs. We realize his true intentions when Anna simply brings photocopies of the diary’s pages. Just tell me where you live, he says, and I’ll come and get it. We begin to fear that the good-hearted Anna may be in danger for ever having seen the diary.

Anna’s mother (Sinéad Cusack) enlists the Russian-born Stepan (Jerzy Skolimowski), Anna’s uncle, to translate the book and find some bit of family information so that the baby might grow up away from orphanages. What Stepan finds is a saddening tale of a girl forced into prostitution, who was then raped and drugged by sadistic gangsters. Nikolai, who oversees the exchanges between Semyon and Anna, warns her to leave it be. “Forget any of this happened. Stay away from people like me,” he says. But Nikolai has his own problems thanks to the imprudent Kirill, whose taste for revenge has sparked retaliation from a rival family. Rumors were spread about Kirill’s drunken behavior, claiming him “queer” to boot; he responded by having the throat of the man who spread such words slit. And yet Nikolai follows Kirill, often ordered like a lapdog even if Kirill does call him “partner”. Nikolai has to clean up Kirill’s mess, along with Anna’s potential exposure of the family with the diary’s contents.

Director David Cronenberg works with writer Steven Knight (Dirty Pretty Things) to create one of the filmmaker’s best, most emotionally involving works. We’re pulled in by the sympathetic Anna in the first act, but then there’s a shift. Our sympathy transfers to Nikolai as he begins to read the horrifying secrets of the diary, and as we’re exposed to his cruel world, we’re also repulsed by it. By then it’s too late, Cronenberg has us, making his long-established unsettling tone all the more affecting for it. Cronenberg began in the 1970s with schlock horror yarn, bloody and poorly acted as it was low budget, and yet faintly prophetic of his later social commentary-infused pictures. By 1983 with Videodrome, he found his voice. Dark and relative, organically flowing movies like The Fly, Dead Ringers, and Naked Lunch followed, solidifying him as an original voice in horror, but at the same time, slowly moving him out of genre characterization.

Cronenberg’s last original screenplay came in 1999, with his reality-bending videogame thriller eXistenZ. Since then, he’s made three films including Eastern Promises. All involved him retooling other writers’ scripts to fit his own needs; all redefined what he’s capable of. And perhaps that’s what makes him great, a true auteur, regardless of subject: his films are only definable as “Cronenbergian”. This is a term that has opened up in the last few years, beginning with Spider and then A History of Violence, if only suggesting “venereal” or bodily horror is not a requirement of his movies.  Even without the science-fiction or horror genres to play around in, Cronenberg doesn’t loosen his reign on bodily themes. Here, Nikolai’s tattooed body is a living symbol, raw and visible like a résumé printed on skin paper. A Russian prisoner tattoos his life’s story onto his body; the tattoos signify his crimes, where he served, what qualifies him for esteem from his gangster betters. Whatever the tattoo shows must be true. Nikolai goes through a type of screening process for Semyon, standing in front of several mob figures, baring his tattoos, thus himself to increase his authority within the family. Reportedly the tattooing idea was discovered during Viggo Mortensen’s research for the role, from the book Russian Criminal Tattoo. Cronenberg found the practice a generous symbolic theme, infusing it as an undercurrent throughout his picture.

Nikolai’s body is tangible proof of his criminal worth, in terms of the tattoos it bears, and also as a singular physical specimen. The latter part is proved in a destined-to-be-great bathhouse fight scene. Kirill’s hasty assassination of his slanderer causes a series of reprisals, one in which Nikolai is attacked while in a spa. Literally baring all, Viggo Mortensen’s naked character savagely fights off two thugs. Everything suggested by Nikolai’s tattoos is confirmed here, since his raw masculine violence is unleashed with unrelenting brutality. Cronenberg has rivaled any fight scene in cinema history; it is both visually arresting and ripe with metaphoric significance, suggesting Nikolai’s body is a proven living symbol.

Vincent Cassel’s character Kirill remains shyly in question since we’re given delicate notes to imply, perhaps, as those rumors suggested, that he is a homosexual. There’s an unsettling scene where Kirill’s sick sense of camaraderie demands that Nikolai have sex with a prostitute while he watches. And throughout the film, Kirill and Nikolai’s relationship is heavily based in touching. While this may be akin to the affection of brothers, we can’t deny how hushed Kirill becomes when his father curses homosexuality. Cassel’s performance is possibly his best work since La Haine, as clearly his character is disturbed in terms of his self-denial, but there’s also something more his behavior suggests. Is it an unspoken love for Nikolai? His pained detachment from his father? Or possibly just guilt eating away at him?

Cronenberg has a reputation of bringing out the best in his actors. In 2002’s Spider, Ralph Fiennes gave a near-silent tour de force as a recently released mental patient. With Dead Ringers, Jeremy Irons portrayed identical twin gynecologists, both with the understated marks of two whole tangible characters. And of course with A History of Violence, Mortensen and Cronenberg’s last picture together, the director drew out award-worthy performances from his entire cast, particularly Maria Bello and William Hurt. That was also the film that showed us how strong an actor Mortensen can be, given the right material. Here, we see the same pained inner conflict present as we did in A History of Violence, but perhaps more touching and distressing for the audience. Mortensen controls his face, moving it slowly and deliberately, with something just under his eyes suggesting another aspect of his character that’s holding back. Nikolai is played with a masterful and sharp attention to mannerism, every movement, even in the bathhouse fight, seems to insinuate his character, which, as we discover, is the point.

Cronenberg’s entire oeuvre was to some degree filmed in Canada, his country of origin. His closest departure came when shooting Spider partly in England. The experience must have made an impression, since he left Canada altogether to film Eastern Promises entirely in the U.K. Despite that, he was still the favorite at the Toronto Film Festival this year, winning the event’s top People’s Choice Award. I would be surprised if the film and Cronenberg didn’t receive multiple Golden Globe and Oscar nominations in the upcoming awards season. Though it is offbeat for traditional award contenders, Eastern Promises is one of 2007’s best pictures.