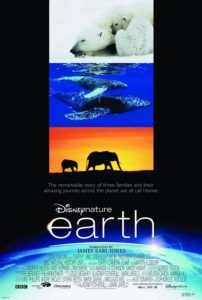 Disneynature’s documentary Earth contains overwhelming beauty photographed in a way that brings us closer to its animal subjects, more than any theatrical exhibition has done before. Capturing intimate moments on a massive scale, no Hollywood effects wizards rendered what we see here. The colors and images all live and breathe. Most of them inspire declarations of cuteness or awe. The presentation is light and joyous and an easy viewing experience, which, unless you’re a self-hating earthling, you’re bound to love.

Following mostly groups of parents raising their young, the film avoids gruesome realities about the animal kingdom while not entirely ignoring the circle of life. A young caribou gets taken by a white wolf; a gazelle cannot outrun its cheetah pursuer. It’s rated G, however, so you won’t see predators tearing flesh from the bone or monkeys deflowering one another. Instead, the cameras follow a family of humpback whales, polar bears, and elephants on their year-round journey of survival. In between their ongoing stories, stops in the surrounding habitats relish in nature’s grandeur and grim truths. Consider the pack of lions stalking a group of elephants in the night, bellowing their roars one after another for an unsetting effect. Or the young elephant that gets separated from its family during a dust storm and follows its mother’s tracks in the wrong direction. But the audience favorite seemed to be the baby mallards leaping from their treetop nest, hitting their bed of leaves on the ground like a marshmallow. These are astonishing, moving, dramatic moments born from a natural narrative.

The footage was compiled from the BBC television miniseries Planet Earth, which first aired in the UK in 2006 and then appeared on the Discovery Channel the following year. Anyone with access to a Blu-ray disc player or HD cable can attest to the brilliance contained within that 11-part overview of the planet’s various habitats. Releasing the film now with recycled footage is sort of cheating, except the result remains such a delight—indeed, there’s probably a whole series of documentary features on the cutting room floor waiting to be made. (The trailer for Disneynature’s Oceans, due on Earth Day next year, appeared before my screening.) Shot with 35mm high-definition lenses, time-lapse photography, and innovative observation methods, the pictures are simply stunning. However, this is the type of visual wonder that is merely serviceable on your television, but becomes wholly magnificent in the theater, preferably IMAX.

The UK version of the film, also released in 2006, features narration by Patrick Stewart, whereas the North American version was redubbed using James Earl Jones. Why Disney’s distributors felt the need to change narrators is curious. American audiences can handle British accents, or didn’t our collective enthusiasm for Harry Potter demonstrate that? Or perhaps it’s a matter of Star Wars over Star Trek celebrity fandom. Maybe it boiled down to who would win in a fight, Darth Vader or Capt. Jean-Luc Picard. Of course, Earl Jones adds much to the production thanks to his deep and distinct tone; at the very least, your children might recognize the voice of The Lion King himself narrating.

Just like Planet Earth, the film offers concern for the dwindling environments of these creatures, albeit through understated implication. From recent temperature changes, polar bears have fewer hunting grounds as the ice melts, and so one bear in the film ultimately starves. Deforestation and industrialization limit the living space of the animals; meanwhile our own urban surroundings flourish. The film recognizes that these problems exists, but avoids stepping onto a soapbox or making the argument a political one. It’s simply a matter of respecting life. What you choose to do about it is up to you.

Reminiscent of Walt Disney’s series of True-Life Adventures, two-reel subject travelogues on topics ranging from “Creatures of the Wild” to “Nature’s Mysteries”, the tradition of Earth has been engrained into the company’s history since the 1950s. That they’ve opted to distribute this rather harmless look at the cuddlier aspects of the wild shouldn’t surprise anyone. The experience then and now is one of appreciation for the splendor in nature, to escape our plastic world and feel engulfed by a wholly foreign yet natural one. Though more peaceful than your average FX-logged summer movie, it’s also more absorbing. This is must-see viewing for spectacle beyond your average manufactured Hollywood rubbish.