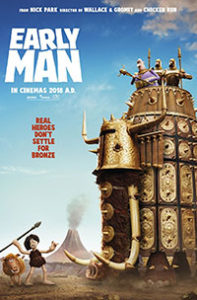 Stop-motion animation has a timeless quality. It can look modern and expressionistic in Mary and Max or Fantastic Mr. Fox, both from 2009. Or it can capture the physical details of a bygone era, as in The Boxtrolls (2014), and appear entirely convincing. Developed for cinema largely as a special effect, animators have been using the medium since the earliest examples of film emerged in the late nineteenth century. And while computer-generated images have replaced most practical special effects and hand-drawn features, there remains a healthy use of stop-motion by artists from Laika or even Charlie Kaufman (with Anomalisa) who understand the medium’s potential to create a tactile, albeit fantastical world. In Early Man, animator Nick Park, the creator of Wallace & Gromit and Aardman Animations, uses the limitless medium to explore our prehistoric origins. A winking shot in the opening even features a Tyrannosaurus rex and Triceratops battling in front of a volcano, an image mirroring the stop-motion dinosaurs from 1925’s classic The Lost World. But who would have thought Early Man actually has more in common with Bend It Like Beckham (2002) than a prehistoric adventure?

Indeed, Early Man is about the origins of football (what the United States call soccer), and the title is a pun-tastic nod to Manchester, the home of England’s favorite footballers, Manchester United. In the hilariously silly prologue, a meteorite falls to Earth in pre-prehistoric times, and cavemen in the area explore the crater to find a geometrically shaped ball—without the required panels of a regulation ball, but no matter. Acting on instinct, the cavemen begin kicking around the ball, erecting goals, and forming the basis of football. But centuries later in the Bronze Age, the cavemen of the area have forgotten how to play, and the football cave drawings left by their ancestors seem like strange dances. Their tribe of bunny-hunting, pig-nosed Cro-Magnons has settled into to a lush valley surrounded by volcanic badlands. Their most imaginative member named Dug (voiced by Eddie Redmayne), followed by his boar-dog Hognob, present the Stone Age’s equivalent of Wallace and Gromit, minus the cheese and crackers.

When their valley is taken over by bronze-clad ruler Lord Nooth (Tom Hiddleston, Frenchy as can be), Dug learns the comparatively advanced society has structured its entertainment around the same game played by his ancestors. Dug resolves to challenge the snooty, sports-fanatical ruling class to a championship game in a wager that, should his side lose, will find his tribe enslaved the bronze mines. With the help of a young woman, Goona (Maisie Williams), whose gender keeps her from playing football for the bronze world, Dug must teach his tribe of club-carrying, uni-browed brutes to organize into a team. And the standard sports training montages ensue. Of course, the bulbous and greedy Lord Nooth has no plans of playing fair. Screenwriters Mark Burton and James Higginson use a predictable story structure laden with lots of goofy, scatological and physical humor on the surface, while also embedding puns galore into the dialogue. Typical of an Aardman production, it’s a rich comic text that probably requires more than one viewing to find every sight gag or play on words.

The animation consists of plasticine figures molded by hand over the course of several years, each with those characteristic Aardman features: an oppressive overbite, eyes close together, large hands and feet, and pear-shaped bodies. Unlike live-action features, stop-motion exists in a world all its own, meaning there’s usually never a moment where the characters feel removed from their surroundings, unlike, say, any recent Star Wars film where the characters seem to exist in a world of CGI. Early Man‘s impressive animation avoids such moments for the most part, except for expansive scenes inside the football arena where the crowds have been digitally added, making the Big Game finale somewhat underwhelming, visually. The film is never better than its scenes in the volcanic badlands, where creatures hide behind every rock and a “mammoth man-eating mallard” roams the terrain.

A good measurement for the effectiveness of any animated film marketed at families is how children in the audience react. The Britishness of the production was lost on the Minnesotan youngsters in my screening. A boy in the theater realized about halfway through Early Man, “Oh, they’re playing soccer!” A restless little girl in the row in front of me asked her grandmother “Can we go now?” with just twenty minutes left. Children without an anglophile streak will surely miss much of the humor, especially the puns delivered by the two announcers, both voiced by Welsh comedian Rob Brydon. But the production’s wit resides in its cultural distinction and commentary on football, and the restlessness of the children in the theater was not enough to dissuade me from appreciating the subtle humor of Early Man, a minor Aardman release though it may be.