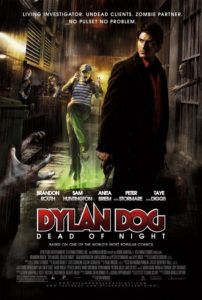 Dylan Dog: Dead of Night, an adaptation of Tiziano Sclavi’s long-running comic book series, combines neo-noir with horror to awkward effect. Over the years, Sclavi has turned out hundreds of issues, all centered on the eponymous, London-based supernatural investigator and his Marx Brother-inspired sidekick Groucho. Screenwriters Joshua Oppenheimer and Thomas Dean Donnelly relocate the character to New Orleans, replace Groucho with a less colorful (but no less obnoxious) assistant, and pit the hero against all manner of classic movie monsters. The procedure is simple: take noir archetypes; substitute all ‘the usual suspects’ aside from the protagonist with monsters (vampires, werewolves, and zombies); remove any evidence of inspired intrigue. And there you have it—a B-movie creature feature that just doesn’t work.

Brandon Routh (the Man of Steel in Superman Returns) plays Dylan Dog, a private eye retired from his former life as arbitrator between various New Orleans monster clans. Along with his chatterbox-of-a-sidekick, Marcus (Sam Huntington, the Jimmy Olsen from Superman Returns), Dylan lives a quiet life taking photos of unfaithful spouses for his human clientele. Of course, Dylan is compelled to return to the paranormal when a werewolf murders a wealthy human importer, whose willing daughter, Elizabeth (Anita Briem), makes an uninteresting femme fatale. The case sends Dylan looking for the murderer, as well as a stolen dagger called “the Heart of Belial”, an artifact thought lost for 500 years.

During his investigation, Dylan calls on old acquaintances, such as werewolf Gabriel (Peter Stormare) and his brutish son Wolfgang (wrestler Kurt Angle) in their slaughterhouse hideout. He also visits a vampire night club run by “Trueblood” leader Vargas, played by Taye Diggs, whose shifty-eyed performance confirms that the vampires are undeniably up to something. (Aren’t they always?) While snooping, Dylan’s lackey Marcus dies and comes back as a zombie, and there’s some forced comic relief set around Marcus learning to “live” with being undead—including a diet of worms and maggots, the pungent odor of decomposition, and body parts being removed without difficulty. Huntington’s overacting in these scenes becomes loud and even abrasive (recalling a less charming Shia LaBeouf in the similarly-themed Constantine), but at least Dylan looks as annoyed with Marcus as we are.

Sloppy staging by director Kevin Munroe (TMNT) prevents Dylan’s skirmishes from reaching the level of diverting entertainment this production should have had in excess. The cheesy makeup and computerized special FX don’t help matters. Rubber monster costumes seemingly borrowed from the set of Power Rangers look clunky and foamy, whereas the CGI looks cartoonish. After encounters with silly werewolves, hissing vamps, and a muscle-bound zombie nothing short of laughable, the final act baddie spawned by the stolen dagger breaks up the monotony, but still has that guy-in-a-suit look. A better script would have allowed viewers to forgive the subpar effects for strong characterizations, except we’re reminded of the bad writing from the dialogue to the cliché narration sewn into every scene.

Dylan walks his audience through each turn, reciting voiceover filled with bad metaphors and moody prose. What’s more, the narration is insultingly repetitive—Dylan mentions several times how monsters hide in plain sight, right under our noses, as if we’ve forgotten that detail since the first few times he told us, or somehow failed to notice the vast amount of creatures onscreen. Despite the gratuitous clarifications of each and every plot detail via Dylan’s voiceover, we learn comparatively little about our hero or how he became a “monster investigator”. Routh’s youthful appearance doesn’t help his character’s legitimacy, either; he reminisces about his former life as a police officer, his apparently legendary status as a monster mediator, and then his “retirement” to become your average private eye. This seems like a lot for a 32-year-old actor, and Routh just doesn’t have the screen presence to carry the role beyond the limitations of the script.

Completed with low-rent production values and an overreliance on exposition, the outcome feels like a failed SyFy Channel series pilot, best described as Double Indemnity meets Hellboy. From a technical standpoint, Dylan Dog is assembled well enough, with dark yet crisp cinematography from Geoffrey Hall and straightforward editing. The production simply lacks the inspiration or personal style that makes similar genre fare so enjoyable. If the intent was to establish the beginnings of a franchise (and I suspect it was, given the Dead of Night sub-title promising future sequels), the filmmakers have done a miserable job of making the audience want more, but they were quite successful at making us want less.