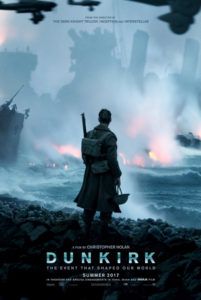 Christopher Nolan forges a monumental war film with Dunkirk, about the so-called “Miracle” evacuation during World War II. After the Battle of France, Allied troops, predominantly the British army (the French and Belgians as well), found themselves trapped between the German offensive approaching Dunkirk, France, and the beaches to their back. With a relatively short distance of a few dozen nautical miles across the English Channel from Dunkirk and England, home remained just out of reach for a staggeringly long period, from May 26 to June 4 of 1940. During that time, some 400,000 troops were stranded on the shores, helpless to defend themselves. The Royal Air Force fought off bombers in the sky, while the Royal Navy slowly made their way to the Dunkirk mole for evacuations; meanwhile, a fleet comprised of hundreds of English citizens captaining fishing boats, merchant marine boats, and yachts risked their lives crossing the channel to rescue their fellow countrymen. And while Churchill reminded the House of Commons the whole affair was a “colossal military disaster,” the story nonetheless speaks to the gallantry of both the survivors and those everyday citizens who risked their lives to save them.

Until now, there has not been an essential film about Dunkirk. William Wyler’s Oscar-winning Mrs. Miniver (1942) took place on the periphery of Dunkirk. Leslie Norman directed a sweeping, albeit serviceable feature called Dunkirk in 1958 starring John Mills and Richard Attenborough, which feels too conventional to retain a place in the memory. More recently, Atonement (2007) and this year’s Their Finest used Dunkirk as either a backdrop or set-piece in their respective stories. But Nolan’s most cinematic approach to Dunkirk uses 70mm photography and long stretches of action without dialogue. Most of the characters remain nameless, while their emotions are contained on the faces of his outstanding cast, including Kenneth Branagh, Cillian Murphy, Mark Rylance, and Tom Hardy. Though Nolan has staged a massive effort, his film also feels small and human—he attempts a balance between scope and intimacy by layering his narrative so it functions in a similar way to Memento (2001) or Inception (2010). However, Nolan’s complex narrative architecture and focus on technical detail overshadow his typically reserved onscreen dramatics, leaving the picture to feel somewhat emotionally removed.

The structure seems gimmicky if it wasn’t so meaningful, meticulous, and brilliantly executed. Three interconnected stories about Dunkirk unfold over the course of the film, each ranging in scale and length, though they each meet at the same climactic moment. The largest segment called “The Mole” takes place over the entire week on the beach, where a commander (Branagh) stands at the end of the pier, looking outward, toward home, while his subordinate (James D’Arcy) wonders why England won’t send immediate help. At the same time, two young soldiers (Fionn Whitehead and Damien Bonnard) try to secure their passage onto an evacuating medical ship by carrying a stretcher or, later, pretending as though they survived a sinking vessel. The mid-sized segment called “The Sea” occurs during a single day. Mark Rylance plays an older man from Dorset with a boat and, along with his teenage son Peter (Tom Glynn-Carney), and his friend George (Barry Keoghan), they set out to Dunkirk with a hull loaded full of life jackets to rescue some of their boys. But a shell-shocked survivor (Cillian Murphy) threatens to impede their journey. Finally, the sequences in “The Air” segment unfold over an hour, following Spitfire pilots (Tom Hardy and Jack Lowden) as they try to protect rescue ships in the Channel. Each segment has been woven into the other, so the viewer may not realize the temporal gameplay at work until nearly a third of the way through this 107-minute feature (a rare under-two-hour effort from Nolan). 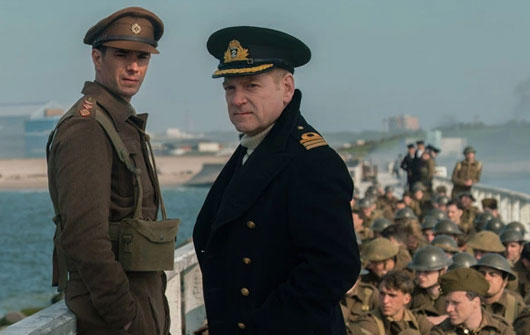 Nolan’s film, for which he takes sole writing credit, avoids relying on shootouts and explosions to thrill his audience. Aside from Hardy’s maverick pilot getting an enemy plane in his sights, the action and explosions incite a sense of danger for the helpless British troops, not gleeful excitement for the viewer. Dunkirk does not revel in realistic depictions of wartime death, with all its blood and viscera; neither does the film require a sense of escapism that sometimes makes war films feel disingenuous for their “War is Hell” themes. Much of the film seems like a love letter to the British people, their integrity, and their willingness to work together to accomplish something harrowing. German figures appear in a single scene, and even then, they’re in the background and out of focus. But the French play a greater role, especially later on when a Frenchman (Damien Bonnard) becomes a scapegoat. Perhaps the film serves as a veiled commentary for England’s departure from the European Union, as the feeling of Europeans working together—not even fighting, just surviving— against a common enemy feels curiously relevant in a post-Brexit world. The second-to-last shot of a burning Spitfire begs to be interpreted.

Cinematographer Hoyte van Hoytema shoots in bluish tones and, elsewhere, muted colors, reflecting the water and heavy machinery at the film’s center. His camera follows the planes in dogfights that, if you’ll forgive the hyperbole, are the most realistic World War II dogfight scenes put to film. The details are immaculate, from the plane’s movements to the way Hardy and Lowden’s voices vibrate in their seats. Editor Lee Smith assembles the camerawork into cohesive, often beautifully long takes, such as a later scene in which Hardy’s plane, out of gas, glides over a beach. Another sequence finds soldiers waiting for the tide in an abandoned boat. Outside, German soldiers use the boat for target practice. As the tide comes in, the German bullet holes threaten to sink the ship, and the men scramble to plug the holes with their fingers and hands, dodging more bullets as their boat slowly begins to float out to sea. But if the film can be faulted, it must be Hans Zimmer’s score that attempts to actionize the otherwise austere character scenes and dogfights with tempos that unnecessarily attempt to inflate the suspense.

Beyond the three-tiered temporal and scopic structure, Dunkirk contains other elemental cinematic devices: the rising tide; water that pours into sinking ships to drown soldiers, or that creates a boundary between home and certain death; fire that burns up oil on the water’s surface; air on which a Spitfire can coast for miles, or that may clear just enough to see England in the distance. But, as suggested, the technical grandiosity is meant to support the human side of Nolan’s first foray into historical filmmaking. Even so, the result feels more mathematical than intuitive in its showcase of the evacuation’s vastness and moving parts. Due to Nolan’s structure, some of the characters feel like types rather multidimensional people, leaving Branagh’s commander to seem present for exposition alone, whereas Murphy and Rylance prove to be affecting exceptions to Nolan’s otherwise detached emotional state for the film. Then again, Dunkirk‘s characters need not have traditional dramatic arcs; it is enough that they acted and survived, and that the film showcases their peril and sacrifice. As filmmaker and WWII vet Samuel Fuller once said, “There are no heroes in war. Only survivors.” Nolan has crafted an impressive tribute to the survivors and the grand-scale efforts of the British people, resulting in the essential film about Dunkirk yet made.