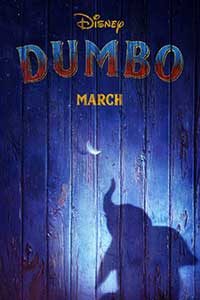 Fresh off the Disney factory line, Dumbo is the studio’s latest pseudo-live-action iteration of an animated classic. Using almost as much CGI as a fully computer-animated release, the production has the glossy look of a digital dream, ornamented to artificial perfection by director Tim Burton and production designer Rick Heinrichs. My somewhat cynical feelings about Disney reimagining its classic animated features in a recent string of live-action films, most of which feature very little that is alive at all, can be found in my negative reviews for Maleficent (2014), Cinderella (2015), Beauty and the Beast (2016), and Burton’s own Alice in Wonderland, the box-office hit that launched this trend in 2010. Even more than most Hollywood productions, these titles reek of an obvious cash grab, exploiting an intellectual property for all it’s worth. Why bother placing Disney classics back in the home video “vault” or making cheap direct-to-video sequels—the studio’s common practice in the 1990s and early 2000s—when you can simply retell an old story in a new format?

Rather than explore my same complaints about the very idea of these remakes, let’s concentrate on Dumbo itself. The film boasts a cute, CGI (but photo-real) baby elephant that you’ll be charmed to see fly; however, every other element of the story, the performances, and the themes fail to evoke a sense of wonder. Those familiar will clamor for the 1941 original, which, upon revisiting, has its share of sizeable problems, but at least it runs a mere 64 minutes and boasts one or two iconic sequences. The new film runs almost double that time, contains nothing so memorable, and seems to fabricate conflict to serve one set-piece after another. Burton, who has long since resigned himself to edgeless commercial fare, at least seems to enjoy the circus setting of 1919, even though the film, rightfully so, issues a final note against the use of circus animals. Of course, because it’s Disney, this is a tame vision of the circus scene. Readers of Ricky Jay’s book Learned Pigs & Fireproof Women or even the best-seller Water for Elephants will be sorely underwhelmed by its lack of authenticity.

Holt Farrier (Colin Farrell, stuck with a corny Southern accent) returns to his job at Medici Bros. Circus, having lost an arm in the First World War. He also lost a wife to influenza, and so his famous horse-riding act is no more. His two young children, the science-obsessed Milly (Nico Parker) and the nondescript Joe (Finley Hobbins), embrace their father, whose new duties under zany ringmaster Max Medici (Danny DeVito, unhinged) involve catering to elephants. Max’s latest acquisition is a pregnant female named Mrs. Jumbo who soon gives birth to a baby boy, Jumbo Jr., who has oversized ears. The floppy-eared elephant is considered an embarrassment, a detail that never quite makes sense because most circuses have “freak shows” that celebrate large and abnormal body parts. In any case, Holt’s children teach Jumbo Jr. to flap his ears and fly, which the animal does when prompted by a feather. Before long, the young elephant is thrown into the ring and forced to perform for hideous audiences that proceed to berate the animal, calling him “Dumbo,” a variation of dumb. In today’s climate of anti-bullying campaigns, Dumbo seems like a cruel name every time it’s said aloud. 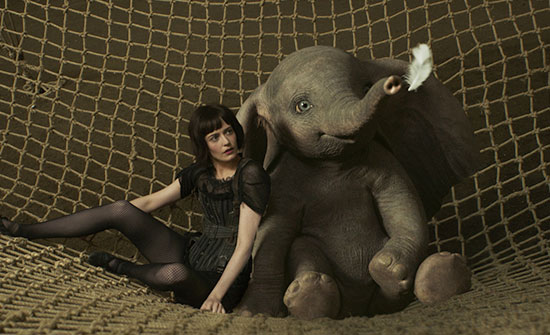 Inevitably, Dumbo learns to fly, drawing the attention of circus mogul V. A. Vandevere (Michael Keaton), whose theme park “Dreamland” wants the elephant for his new attraction alongside the French trapeze artist Colette (Eva Green); in fact, he wants Colette to ride Dumbo, a ridiculous sight to be sure. But everyone from Holt’s children up to Max come to realize that Vandevere is a huckster extraordinaire. The climax arrives in a daring, fiery escape from the curiously Walt Disney-like figure, whose desire for the latest and greatest attraction in his veritable Disneyland has led to his exploitation of talent for the almighty dollar. His “Dreamland” becomes something akin to Jurassic Park (1993), where the untested attractions break or attack, and his polished exterior is revealed to be a cruel capitalist. Could the screenplay by Ehren Kruger, best known for writing a bunch of Transformers sequels and the English-language version of The Ring, actually have something to say about Disney’s longtime history of soulless commercialization? Does the calamitous end of Dumbo yearn for the financial collapse of Walt Disney Studios? Doubtful.

Along the way, Burton fans might revel in the reunion between Batman Returns (1992) stars Keaton and DeVito, but there’s something about watching two hours of CGI animal cruelty and peril that proves decidedly unpleasant. Dumbo is subjected to fire, dangerous heights, and separation from his mother in a few heart-wrenching scenes. And even though he’s animated, it’s still deeply uncomfortable. Beyond that element, Dumbo’s cuteness is augmented by his cartoon-like eyes that seem to register everything human beings say to him. There are whole speeches given by Milly to Dumbo that the animal clearly processes and negotiates in his eyes, almost like the superpig from Okja (2017). As for the other characters, Kruger’s script doesn’t give them many gradations beyond their theme. Milly, for instance, carries a key around her neck as a gift from her late mother. The key is a self-actualization symbol that, inevitably, parallels with the feather Dumbo thinks he needs to fly. Similarly, Holt sees Dumbo’s oversized ears as a disability that, like his missing arm, becomes an advantage—then again, the sudden appearance of Holt’s newly made robot arm in the end is nothing short of strange.

Much like the original, Dumbo is a mixed bag featuring a few memorable sequences in an otherwise uneven film. Most of the human performances show evidence of actors struggling to place themselves in worlds painted by CGI artists, especially the dull performances by the child actors. Burton’s direction, typical for the last decade or more, feels devoid of inspiration, quirk, or risk. Of course, the best moment in both versions is the “Pink Elephants on Parade” sequence. In the original, Dumbo accidentally gets drunk and hallucinates pink elephants, a 1940s signifier of inebriation. The new film features bubble artists creating elephant-like shapes as Dumbo watches from behind the curtain, adorably nodding his head to Danny Elfman’s catchy score. Brief moments of watching Dumbo’s cuteness don’t amount to a wholly satisfying experience, and there’s too much about this remake that remains uneven, unnatural, and unconvincing to recommend it. The overlong, confused film relies on brand recognition and an aww factor to draw its audience, and much like one of Vandevere’s spectacles, it feels hollow and cheap, despite the production value.