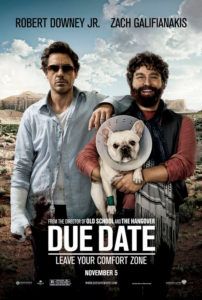 Comparisons between Todd Phillips’ new road movie Due Date and the John Hughes classic Planes, Trains and Automobiles are unavoidable. That’s because they’re the same movie. Save for a few crucial differences that make Hughes film a lasting holiday centerpiece, Phillips has recycled that film’s plot formula for a comedy with more laughs than heart, whereas Hughes knew exactly how to achieve a vital balance. The result has plenty of laughs, but just like Phillip’s last comedy, The Hangover, they’re not laughs that will age well. After the first viewing, you’ve seen everything there is to see.

Robert Downey Jr. takes the Steve Martin snob role as a temperamental, somewhat elitist everyman desperate to get home for a pivotal family function. In Hughes’ film it was for Thanksgiving; here it’s for the birth of his first child by his nervous wife (Michelle Monaghan, Downey’s costar in Kiss Kiss, Bang Bang). Along the way, his travel plans go bust, and they’re made worse thanks to a kind-hearted but eccentric fellow traveler, formerly played by John Candy, here assumed by Zach Galifianakis. Through a series of misadventures, including a car wreck and run-ins with some peculiar folks during their journey, the snob grows increasingly annoyed with the eccentric. But despite his annoyance, the snob learns some valuable life lessons from his newfound friend, and the two become best of pals. Hughes or not, chances are, you’ve seen this story before in some form or another.

As always with such buddy comedy road movies, surprise characters during the voyage are meant to break up the monotony of the central odd couple. Danny McBride appears as a rude Western Union teller who’s late for his reservation at Chili’s. Jamie Foxx plays Peter’s friend who experiences first-hand the extreme of Ethan’s ability to annoy. Juliette Lewis makes her second appearance this year (after Conviction) as a white trash lowlife (she’s a Phillips comedy mainstay, making appearances in nearly every one of his movies since Old School). These cameos are amusing, but they hardly stand out next to the interactions between Downey and Galifianakis.

Downey plays Peter Highman and retains his sharp-witted persona, ripe with the motor-mouthed sarcasm that makes his Tony Stark so enjoyable. And while his awe-eyed looks of incredulity provide a hearty belly laugh, he’s playing it straight next to Galifianakis, whose oddball performance as Ethan Tremblay makes the movie. Though he’s incapable of stirring up any real emotions in the way Candy could, Galifianakis proves to be just so damn obnoxious that an audience can’t help but laugh. Ethan’s shortcomings and bizarre personality traits can only be described like a natural disaster when Peter explains his situation to his wife, as though Ethan was something that just happens to people. Discovering Ethan’s nuttiness and unbelievable behavior for yourself is the best part of this movie experience, and the delivery of Galifianakis’ pokerfaced weirdness couldn’t be funnier.

Scenes in which we’re supposed to care about these characters fall flat, since the movie’s attempts at sentimentality and sincerity feel forced rather than natural progressions of the characters. We’re not sure why these characters bond throughout the course of the movie, but we witness a series of exploits that are intercut by drive-to-the-music scenes—the soundtrack features songs like Neil Young’s “Old Man” or Rod Stewart’s cover of “Amazing Grace”, which tell us exactly how to feel (even if we’re not feeling it). Each stop involves some wacky encounter or unfortunate event, insomuch that the movie might be inspired by your average situational comedy. Indeed, the way the four credited screenwriters nod to TV’s Two and a Half Men throughout the movie is evidence of this.

There will be much laughing during Due Date, and perhaps that’s enough. There aren’t many comedies in 2010 that will make you laugh harder. Comparing it to Planes, Trains and Automobiles isn’t exactly fair given the high precedent, and doing so may ruin the experience for you. These similarities between the two didn’t begin to bother this critic until after the movie, since Downey and Galifianakis do a fine job of consuming the viewer’s attention while it’s playing. But like most of Phillips’ comedies, the movie’s half-life is brief, leaving the viewer only temporarily diverted until the moment it’s over. Still, that it avoids losing the viewer during its brief and derivative 95-minutes is a testament to its ability to amuse, even if it never really engages.