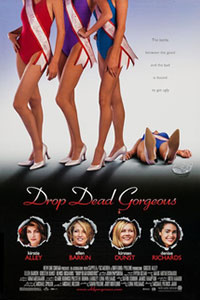 About 30 minutes into Drop Dead Gorgeous, I became aware of the expression on my face. It probably resembled something like that of the third judge of the movie’s teenage beauty pageant. Played by screenwriter Lona Williams in a dialogue-less role, the judge frowns, as if confused, disgusted, and unsure how to react to the proceedings. She’s always off to the side, overshadowed by her two fellow judges—one a hardware store owner played by Whose Line Is It Anyway? regular Michael McShane, the other a creeper pharmacist played by Matt Malloy. That’s how I felt during this dark comedy, a Minnesota staple that this Minnesotan was watching for the first time. In a blend of wincing confusion and discomfort, I experienced a gross failure to connect with what has become a cult favorite. To be frank, I should have known better. Cult fandom often relies on a certain amount of repetition. Most cult films don’t begin to show their colors or earn a cherished place among fans until the third, fourth, or even fifth viewing. Unlike many of my generation, I haven’t spent the last twenty years consuming Drop Dead Gorgeous on DVD or repeated Comedy Central broadcasts. It escaped me, and so does much of its appeal.

More than 20 years after Michael Ritchie skewered the teen beauty pageant with Smile (1975), Williams delivered an even darker take in the summer of 1999, sprinkled with some violence and over-the-top Minnesotan accents that make 1996’s Fargo seem nuanced. Michael Patrick Jann, best known at the time for MTV’s sketch-comedy show The State, directs Williams’ script, a mockumentary on the heels of CB4 (1993) and Waiting for Guffman (1996). Alongside established talent such as Kirstie Alley and Ellen Barkin, younger stars including Kirsten Dunst, Brittany Murphy, and Denise Richards appear. Most of the other roles were farmed out to Minnesota locals, such as a young Amy Adams, who took a break from Chanhassen Dinner Theater to accept the part—her first appearance in a feature. But Drop Dead Gorgeous is perhaps best known for its in-your-face humor, with each joke designed to offend, disgust, and shock. Most of the jokes at the expense of Minnesota culture provide a chuckle, but somewhere between the anorexia humor and the seafood barf-o-rama, it lost me. 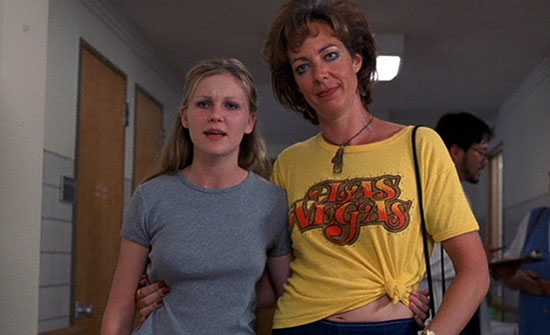 At the time, Drop Dead Gorgeous tanked financially and received little affection from critics. It also failed to earn back its budget or marketing costs from its $10 million in receipts. Still, it was also competing with that summer’s packed release slate, which included raunchy comedies like South Park: Bigger, Longer & Uncut and American Pie alongside unexpected box-office draws like The Blair Witch Project and Eyes Wide Shut. In an overstuffed summer, bad reviews could break a movie, and the critics were not kind to Drop Dead Gorgeous. Roger Ebert admitted the humor probably worked on paper, but “subtle miscalculations of production and performance” were to blame. In her harsh pan, Janet Maslin of The New York Times accurately predicted the movie would run “briefly in theaters before it sends home video enthusiasts reaching for the rewind button.” Variety‘s critic argued the movie “would have gained a lot of mileage from just a tad more subtlety.” At the moment, I tend to agree with these assessments, but I could imagine it growing on me over time.

It’s easy to see why Drop Dead Gorgeous has gained a devoted following. “This is for the girls who went to Clueless and were like, Fuck them,” the director told BuzzFeed, demonstrating how the satirical nature of Amy Heckerling’s comedy escaped him. To Jann’s point, his movie caters to the rebellious audiences of Heathers (1988) and Welcome to the Dollhouse (1995) or even Jawbreaker, which was released earlier in 1999. It’s a movie that’s not content with satire; it wants its characters to be blown up, burned, and shot in the head. That’s what Williams was going for by all accounts, and there’s nothing innately wrong with that. But it’s how Jann approached the subject that failed to connect with me, and Williams too, according to the reports of their behind-the-scenes creative differences. Williams lost arguments to the aligned duo of Jann and the movie’s producer, Gavin Polone, both of whom had specific ideas about how Drop Dead Gorgeous should play out (making Williams’ silenced role next to the two more vocal judges an apt, if unintended analogy). Jann simply rewrote the sections he wanted to write without asking. Both the screenwriter and director were making their first feature in Hollywood, and it shows.

The story follows the weeks leading up to the Mount Rose American Teen Princess competition in the fictional town of Mount Rose, Minnesota. We root for Amber Atkins (Dunst), a sweet girl who tap dances and dreams of becoming the next Diane Sawyer. She’s halfheartedly encouraged by her mother, Annette (Barkin), but more so by Annette’s best friend, Loretta (Allison Janney, excellent). Amber’s main competition is Becky (Richards), daughter of Gladys Leeman (Alley), the former winner and current organizer of the pageant who’s obsessed with ensuring Becky’s victory. Gladys’ husband, racist sleazeball Lester (Sam McMurray, echoing his role in Raising Arizona), the richest man in town, has all but bought and paid for Becky’s win. And the other girls, such as the perpetually giggling Lisa (Murphy, delightful) or cheerleader Leslie (Adams), don’t stand a chance. That’s in part because someone is killing the competition and making the deaths look like random mishaps. Now let’s see, who’s so fixated on the pageant that they would be willing to kill for it? And who would have the resources to, say, pay off the police to label these blatant murders as freak accidents? 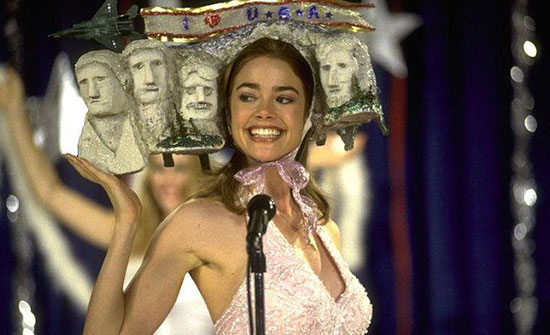 Drop Dead Gorgeous isn’t a murder mystery, even though the culprit remains a secret until the explosive climax. The point isn’t to tantalize us with the question of who’s killing aspiring pageant winners; it’s to paint small-town folk and pageantry with the broad brushes of camp and trashy humor. Williams based the story on her experience in the Junior Miss Minnesota pageant, which she claims to have participated in, and won, less out of a genuine competitive streak than a desire to escape her hometown—called Rosemount, making the movie’s Mount Rose seem like a facetious change. Given her origins, Williams takes aim at the region’s accents, our proclivity for “bars” and pork products, and our high schools that serve lutefisk (wait, what?)—all familiar Minnesota-isms that feel like easy joke fodder. Originally called Dairy Queens, though there’s not much dairy mentioned, the movie changed titles when a certain frozen treat chain sued the production. Anyway, Drop Dead Gorgeous is a better title, and more to the macabre point, which borrows the same vicious blend of violence and offensive humor as Very Bad Things (1998).

Obviously, laughter is the best measurement of a comedy’s success, but comedy is also aggressively subjective. There’s a lot that made me chuckle in Drop Dead Gorgeous and a lot that made me cringe. Fortunately, I laughed more than I cringed. In the former category, Williams’ deliciously sadistic script finds Amber practicing her tap-dancing routine at her after-school job, where she applies makeup to corpses at a mortuary. I also liked how one of the girls performs a dramatic scene from Soylent Green (1973) for the talent round. The funniest scenes belong to Janney’s no-nonsense surrogate mother, whose confident flirtatiousness had me rolling. But there are less savory moments too. In her review, Janet Maslin suggested the movie may contain “a record number of miserably unfunny jokes.” Doubtlessly, she was referring to (what I can only assume is) Drop Dead Gorgeous’ record for the most uses of the word “retard” in a film, usually directed toward MADtv’s Will Sasso, who plays a judge’s son with an intellectual disability. There are also running jokes aimed at a former contest winner (Alexandra Holden), now stricken and hospitalized with anorexia, as well as a grossly stereotyped Japanese family.

Ultimately, the movie felt more interested in lashing out at anyone and everyone, which doesn’t require any discipline, just anger and meanness. The characters suffer for it. Only in the end, when it proves itself to be not merely a story about the right person winning the beauty competition but about the corrupt and opportunistic institution as a whole, does it feel like there’s a point, even a cruel tenderness to Amber’s storyline. After being passed over for Becky, Amber happens to be on the scene when Gladys, the guilty party, goes on a shooting spree and kills a reporter. Picking up the reporter’s microphone, Amber quickly improvises on live television and lucks into a warped version of her dream to become Diane Sawyer. If this is a happy ending, why does it suddenly feel like Drop Dead Gorgeous is a prequel to Gus Van Sant’s To Die For (1995)? 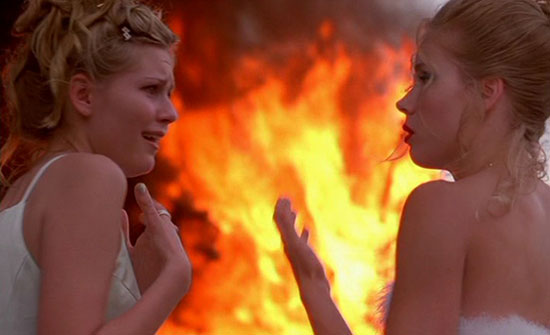 Regardless, Williams’ commentary on the vacuousness of these competitions and the people who invest themselves in winning has less weight than Smile, a more nuanced satire that cuts into these proceedings with the precision of a scalpel rather than Drop Dead Gorgeous’ scattergun approach. As for the mockumentary tactic, Jann’s professional-looking production dispels any illusion that this is a documentary crew on the scene of an actual hinterland teen beauty pageant. At least Smile adequately addressed how these pageants exploit girls. For instance, Drop Dead Gorgeous doesn’t have much to say about Malloy, the sweaty pharmacist with the wide-eyed hornball expression who can’t wait to see the girls—he has his camcorder at the ready. His ishy presence is enough to put us on alert. It acknowledges rather than adequately critiques our culture’s normalization of the pedophilic gaze, which exposes a vast moral hypocrisy when so many Americans called for Netflix to ban Cuties (2020), a movie whose detractors claim sexualizes pre-adolescent girls, from their platform. Meanwhile, the Miss Teen USA pageant is still going strong.

Of course, knowingly breaking taboos and transgressing established boundaries of good taste is part of what creates a cult around movies like Drop Dead Gorgeous. (And recent reassessments have led to the movie’s further elevation into the cult stratosphere, prompting Warner Archive to release a long-asked-for Blu-ray release.) A particular type of viewer delights in how the film pokes fun at the characters and their exaggerated behavior, especially when it’s done with bad taste, achieving a level of John Waters-style camp. However, given its PG-13 rating, it felt as though the movie could have been even darker and more challenging if given the freedom of an R rating. Williams—who wrote the gun-toting cheerleader satire Sugar & Spice (2001), though she had her name removed after rewrites in a post-Columbine world made her original work unrecognizable—clearly has no problem with controversial material. But I felt like Drop Dead Gorgeous was less interested in taking on the pageantry and people involved and more interested in making jokes about gun-toting Lutherans and St. Paul Pork Products. And while funny at times, it doesn’t resonate beyond the gleeful, acidic surface. Then again, maybe I’ll grow to love it after another three or four viewings.

(Editor’s Note: This review was suggested and commissioned on Patreon. Thank you for your recommendation and continued support, Lyndy!)