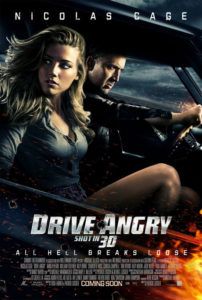 In spite of the gratuitous violence, profusion of naked ladies, and Nicolas Cage playing a badass who breaks out of Hell to settle some scores, Drive Angry 3D doesn’t achieve the sort of rip-roarin’ good time you’d expect from this intentionally campy B-movie. Co-writer and director Patrick Lussier (2009’s My Bloody Valentine) tries desperately to attain that so-bad-it’s-good label by offsetting impressive car stunts with mediocre computer effects and mild tongue-in-cheek humor. Lussier’s gory action comes with plenty of debris and body parts flying at the audience captured by a fine use of 3D lenses, but with all of the movie’s silly pleasures, it still lacks the style or edge to make it memorable.

Donning all-black garb and bleach-blond hair, Cage plays Milton, a netherworld escapee on a mission to save his baby granddaughter from being sacrificed by Jonah King (Billy Burke), a devil-worshiping cult leader who professes to unleash Hell on Earth by the next full moon. King murdered Milton’s daughter, and so, after relieving his southern-fried, no-nonsense sidekick Piper (Amber Heard) from her no-good fiancé, Milton begins gunning down everyone in sight connected to King’s outfit. Meanwhile, released from Hell to track the runaway, a well-dressed demon known as The Accountant (William Fichtner) sniffs after Milton in pursuit. Luckily, before he broke out, Milton nabbed a supernatural hand-cannon called the “God-Killer”, which will fix that demon real good like.

Milton is played with sincerity in a surprisingly low-key turn for Cage, leaving Fichtner’s enjoyable tongue-in-cheek performance to steal the leading man’s thunder from this R-rated carbon copy of Ghost Rider. Though Milton would seem to be a perfect role for one of those deliciously overblown Cage performances, the actor grumbles his lines and allows the movie’s purveyance of muscle cars and bare breasts to do the talking. Burke’s role as King feels equally underplayed and better suited for a more animated actor; something about the Twilight star (go Team Charlie!) just doesn’t look right in a silk shirt, spouting about the coming of Satan. Also appearing in small supporting roles are David Morse as Milton’s ex-partner in crime, and cult favorite Tom Atkins (from The Fog and Night of the Creeps) makes an appearance as a crusty police chief.

Had the production been given intentionally silly one-liners or taken those actionized setups just another step further, then Drive Angry would feel more like a grindhouse flick instead of yet another disappointing Nic Cage movie. But Lussier and co-writer Todd Farmer take their save-the-baby-from-Satanists plot far too seriously. Consider the movie’s most outlandish sequence where, mid-coitus, Milton and a random blonde vixen are interrupted by goons carrying scythes and axes. Milton doesn’t bother zipping up, but rather holds onto the nameless bimbo as he shoots down bad guys. At one point during the ruckus, Milton and mate are shocked with a cattle prod. Here’s how Grindhouse would’ve done it: They both orgasm from the electric shock, and she thanks him for the experience afterward. Instead, Cage nearly passes out and the woman is traumatized. And so a major opportunity for laughs is replaced by an awkward seriousness within exploitation extremes.

To achieve the kind of entertaining guilty pleasure awesomeness that Drive Angry aspires to, and that movies like Grindhouse and Slither achieved with joyously campy enthusiasm, there’s a delicate formula that must balance five key components: 1) intentional humor, 2) deliberately shoddy production value, 3) quality actors using their talents in absurd ways, 4) a hint of superfluous sleaze and vulgarity, 5) a pornographic amount of violence. In other words, there must be a tasteful amount of tastelessness. Some movies, like last year’s Piranha 3D, pour these ingredients on so thick that their tastelessness overwhelms. Lussier comes very close to reaching a satisfying middle ground, but his formula remains uneven, specifically with regard to the script’s lack of humor. Lussier prefers we laugh at his movie rather than with it, and this quality makes the result feel unfocused. And though some might argue that being “focused” is contrary to the nature of such a movie, Quentin Tarantino and Robert Rodriguez would argue that it takes great precision to purvey great trash.