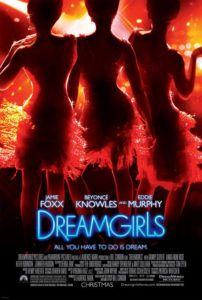 Fans of musicals, by definition, cannot revere reality; that is, unless their day-to-day lives involve breaking randomly into song. Like opera, musicals just don’t make sense, but they can often be beautiful. Audiences are asked to view musicals from a post-modern perspective. Music and film combine into this strange style that demands we believe our problems are solved through a catchy ditty and well-choreographed dance routines. If only that was true. Some musicals do not rely on bending reality with songs; these are often biopics. The best example is Yankee Doodle Dandy, which tells the story of entertainer and songwriter George M. Cohan—the songs in the film are diegetic performances, made on stage, by the main character and his family. If a character is sad, he or she talks about it; there are no awkward moments where a character sings about how they feel unless the stage song coincidentally reflects the character’s emotions. Songs do not drive the plot of a film like this, they supplement it. The music is natural, like in Ray, The Doors, or Walk the Line, Yankee Doodle Dandy plays out entire songs where they would be performed in reality.

Dreamgirls begins with three young African-American women, Deena, Effie, and Lorrell, as they try to break into the big time. Reminiscent of every movie that tells the life story of a musician, the Dreamettes become tarnished by the spoils of success. Ray Charles abused women and became addicted to drugs; Jim Morrison abused women and became addicted to drugs; Johnny Cash treaded on at least one woman and also did a lot of drugs. None of the Dreamettes use drugs or take sexual advantage of females, but each of the trio finds herself raped by fame’s sleaze.

I wish Dreamgirls would have taken a hint from its aforementioned predecessors. For the first half-hour, the songs played as naturally as they would in a true story biopic; they were simply part of a stage performance. I enjoyed the early blues and Motown numbers and the voices of “actresses” Beyoncé Knowles and Jennifer Hudson (Beyoncé was a pop star; Hudson was an American Idol star). But then, out of nowhere, the plot was moved forward via song. The audience is smart enough to figure out how a character feels without the benefit of lyrical narration, so why do most musicals take this absurd turn? The film went from a biopic to a cheesy musical in about half an hour. And it got worse as the film went on.

Dreamgirls is based on a Broadway musical, and it makes sense that this was originally a stage story. The techniques used to move the story forward are very stagy—the type of faulty storytelling a person could dismiss as part of the “show” on Broadway. On film, those gimmicks don’t work. Most notably, Effie’s big song, “And I’m Telling You I’m Not Going” and the Jamie Foxx number “Steppin’ to the Bad Side.” Songs like these transform the film into a big-budget music video.

Eddie Murphy’s character James ‘Thunder’ Early (a send up to real-life performers like Little Richard and the recently departed Godfather of Soul, James Brown) sings the film’s finest music. Given the last ten years of Eddie Murphy comedies (crap like Showtime, Daddy Day Care, The Adventures of Pluto Nash, and Holy Man), who would have remembered that Murphy can actually act? Murphy’s James ‘Thunder’ Early proves the actor is capable of making the transition from comedy to drama, a transition successfully made by comedians such as Robin Williams, Jim Carrey, and Adam Sandler. The performance is a caricature, sure, but it’s a serious, well-acted one backed by great music.

Only about five or six of the more than twenty songs in Dreamgirls uncomfortably stand out as plot narrations. The remaining songs are electric stage performances by James ‘Thunder’ Early and the Dreamettes, Deena and the Dreamettes, or solos in a funk, Motown, Disco, or Rhythm and Blues style. The talent here is impressive, but sometimes the songs feel too dramatic for the story’s content. Effie and Deena both have their own grandiose, emotional outburst-of-a-song. Their solos are over-the-top and a little too American Idol for my taste (there was way too much exaggerated bending and reaching, otherwise typical motions for current pop idols). Dreamgirls won’t affect you emotionally (Unless you were involved with the music industry in the ‘70s.), though it will entertain you. Disconnect yourself from the story, which follows the basic rise-and-fall lifeline of every musician biopic ever, and you’ll at least be able to enjoy several good songs and a helluva performance by Eddie Murphy.