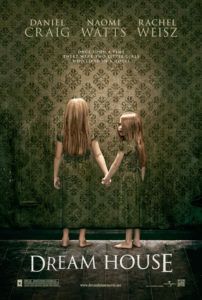 From Jim Sheridan, a theater veteran and powerhouse director of My Left Foot, In the Name of the Father, and In America, comes a supernatural drama of sorts called Dream House. Part ghost story, part murder mystery, the film features an impressive cast, including Daniel Craig and Rachel Weisz (who fell for one another on set), as well as Naomi Watts. All of this talent would normally indicate something significant to follow, perhaps a uniquely dramatic horror movie, but the only thing scary about the project is Sheridan’s inexplicable plummet into such predictable, overwrought territory. Even distributors at Universal must have caught wind, as they unloaded it into theaters without prescreening it for critics. Usually such treatment is reserved for gore-frenzied trash like Saw.

Screenwriter David Loucka, whose most notable credit belongs to the 1989 comedy The Dream Team, begins his tale when book editor Will (Craig) leaves his job to become a writer and spend more time with his wife, Libby (Weisz), and their two children in their new residential home. Things get scary when the kids see a prowler standing outside the window, and Will finds footsteps in the snow. Early “happy family” scenes feel forced and unnatural, which is ironic given the on-set romance; none of the expected chemistry between Craig and Weisz emerges. At any rate, a series of haunting clues leads Will to discover that a horrible crime took place in his house, involving a man who murdered his wife and two daughters. Could the perpetrator be back to snoop around his old killing ground? After more investigation, Will learns that he’s the culprit. Revealed in theatrical trailers, this “twist” arrives after nearly a half-hour of tiresome, concerned glances from small-town locals and his neighbor (Watts), who all look at Will like he’s killed someone.

Turns out, he’s suspected of shooting his family five years ago, and after his release from a mental institution, Will returned home to relive a fantasy life with his hallucinated loved ones. Shifting from The Sixth Sense into The Shinning, Will begins to see flashbacks of what really happened five years ago, complete with CGI nightmare imagery to transform the setting into a creepy spookhouse cliché. By this time, however, the audience has already figured out that the answers to Will’s questions have something to do with the other notable actors onscreen—Elias Koteas’ lingering weirdo drifter and the neighbor’s cartoonishly evil husband played by Marton Csokas. Sheridan makes an all-too-common error in Hollywood thrillers: casting quality actors in minor supporting roles as if they weren’t significant, but of course they are, because why would a quality actor take such an inconsequential role unless it developed into something more?

Sheridan combines elements from The Amityville Horror and David Cronenberg’s Spider, not to mention a dozen other titles like The Others, Stir of Echoes, and even Don’t Look Now. For all his credibility, it must be mentioned that in recent years the director has made some curious decisions, such as 2005’s Get Rich or Die Tryin’, so his utter failure here doesn’t result in too much of a shock. Still, he’s a gifted filmmaker when it comes to stories about domestic conflict and emotional veracity, but here he’s completely out of his gourd, and clearly loses control or patience for the material in the second half. Moreover, the filmmakers inject all sort sorts of unnecessary horror flair to liven up the proceeding, such as the aforementioned nightmare visuals, which were obviously conceived in post-production and never intended by the script. The first half moves with a steady pace, but once the spoiled twist is revealed, editing becomes erratic and only worsens during the laughably bad climax.

Fortunately for everyone involved, they’ve already ostensibly disowned a film that few people will see, having moved on to endorsing projects for which they can show some pride (Craig has the English-language version of The Girl with the Dragon Tattoo, Watts will appear in Clint Eastwood’s J. Edgar, and Weisz has a part in Terrence Malick’s next film). And those brave souls who decide to go against all warnings and see Dream House, they probably have no idea what they’re in for. The disorienting promotional campaign ruined the best twist in the film (although, if they hadn’t spoiled it, everyone would have seen it coming) and issued varying trailers, some selling a horror movie and others selling a Gothic drama. Viewers have no idea what to expect going in; and afterward, they’ll have no idea what to make of the jumbled, mishandled mess they’ve just witnessed.