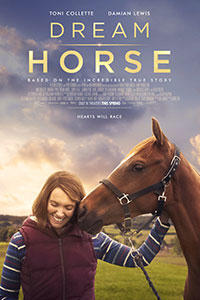 Dream Horse is the kind of movie that sparks an internal debate. Does a formulaic movie automatically mean it’s bad? Let’s assume that it does not, given that most movies, especially from Hollywood, adhere to a prescribed recipe that builds upon or repeats proven techniques and storylines. So when does a movie’s embrace of formula become detrimental to the viewer’s enjoyment? There’s no clear line of demarcation. Every viewer will decide whether or not they can put up with a movie’s take on a particular recipe. Sometimes it depends on one’s familiarity with the movie’s antecedents. Someone unfamiliar with Die Hard (1988) could hardly be blamed for thinking Speed (1994) was a true original. But sometimes a movie’s resemblance to earlier material doesn’t matter; the execution is so good that its use of formula makes no difference.

As you might have guessed, Dream Horse follows a well-established structure. Based on the 2015 documentary Dark Horse: The Incredible True Story of Dream Alliance, this is a very UK affair. The movie follows the tradition of Whisky Galore! (1949) and Calendar Girls (2003)—stories about small villages whose quaint inhabitants band together to do something altogether outlandish and unexpected, but ultimately funny and heartwarming—with a dash of Seabiscuit (2003). In this case, members of a Welsh town contribute to a racehorse ownership syndicate, and after the usual trials and tribulations, their unexpected venture becomes a success. The screenplay practically writes itself. But once you get over the movie’s formula and accept that formulas become so because they work, you can identify what works about this one.

For starters, Toni Collette. She plays Jan, a bored woman who works two jobs—bartender, grocery store clerk—and wants more out of life. Her retired husband, Brian (Owen Teale), spends his days on the couch, regretting that he never became a farmer and watching TV shows about animal husbandry. Having once raised and raced pigeons, Jan yearns for the days when she had that kind of focus. One night at the bar, she overhears a local tax advisor, Howard (Damian Lewis), talking about a winning horse. Then comes her kooky idea: She runs the numbers and proposes a plan to Brian. They will enlist local investors to contribute toward a stallion that will be bred and raised for racing at a top-tier stable. With help from Howard, she organizes a couple of dozen investors to contribute as low as £10 a month. And together, they all watch Dream Alliance, as they name the horse, do the unlikely and race his way to victory.

The screenplay by Neil McKay uses themes about underdogs and finding purpose. Jan mobilizes the usual cast of local characters (the old codger, the stuffy fusspot, the detractor, et al.), none of whom look like the usual elitists found on Welsh racetracks. There’s some humor around these small-town folk thumbing their noses at the typical horse investors who spend millions on raising a winner, though the movie lacks anything resembling a proper villain. Elsewhere, everyone’s trying to break themselves out of their dull routines, soul-sucking workweeks at the office, nights at the bar, and nothing to talk about at home except what’s on television. But with Dream Alliance, they commit themselves to “the hwyl,” a particular “emotional motivation and energy” that gives life meaning—one of many notes of Welsh pride in the movie.

Director Euros Lyn, whose résumé includes episodes of Doctor Who, Black Mirror, and Daredevil, delivers a movie that strikes every beat that it should. It’s shot in crisp color (especially those greens) by cinematographer Erik Wilson, and the light score by Benjamin Woodgates doesn’t overemphasize those heartstring-playing moments of near-disaster and inevitable victory. What sells the movie are the performances. Collette, Lewis, and Teale each do subtle work that never overplays otherwise predictable emotional beats ranging from “Should we put Dream Alliance down?” to “Do you think he has a chance to win the big race?” The movie manages to be exactly what you would expect based on its logline, but it fulfills every expectation with crowd-pleasing confidence. Dream Horse doesn’t rethink the movies that inspired it, and it doesn’t have to. Plus, the cast’s rendition of Welsh star Tom Jones’ “Delilah” over the end credits cannot help but leave the viewer brimming.