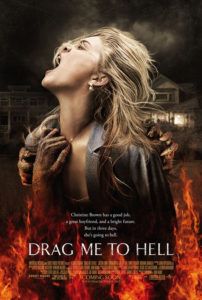 Director Sam Raimi returns to his roots with Drag Me to Hell, his self-described “spook-a-blast” chiller that has no intention of allowing even a moment of reprieve for the viewer. Potent beyond belief, this insanely frightening film plays like a funhouse of horror movie shocks and menacing tension that refuses to yield until the last frame. Balancing comic touches and rushes of nightmarish dread, the picture’s creepshow experience takes pleasure from its own wonderful wickedness. Through it all, Raimi, finally returning to the genre where clearly he was meant to be, maintains wit and style and humor all while simultaneously revolting his audience, but never relies on the exploitative scares so prevalent in modern horror.

Christine Brown (Alison Lohman) wants to earn a crummy assistant manager promotion at her bank, but she has to compete with her sniveling newbie coworker for the attention of her slimy boss (David Paymer). She’s a tangible character with realistic aspirations, aptly played by the sympathetic and sweetly innocent Lohman—not the usual horror movie victim that the audience can’t wait to see receive their just deserts. When Christine denies Mrs. Ganush (Lorna Raver), an old Gypsy woman, a third extension on her mortgage, the woman attacks her (in a slapstick parking garage duel of epic proportions) and infects her with a curse. Over the next three days, a demon spirit called a “Lamia” slowly materializes with the intention of doing as the title suggests, dragging Christine down to hell for punishment.

Haunted by the wraithlike shadows of the Lamia goat-creature, and suffering sudden appearances by Mrs. Ganush’s phantom presence, poor Christine is subject to unbelievable tortures, particularly when considering the PG-13 rating. With everything from maggots to embalming fluid to old lady sputum vomited into Christine’s mouth by the ghastly things terrorizing her, the film will test your gag reflexes. At one point, she attempts to endure the Lamia’s taunts during a meal with her skeptic boyfriend (Justin Long) and his parents; all at once, Christine hacks up a fly, which proceeds to buzz around the dinner table. That would mark the end of any formal gathering. Eventually, she enlists the help of psychic medium Rham Jas (Dileep Rao) to help her dispel the curse, trying everything from animal sacrifices to a séance to rid herself of the Gypsy woman’s scourge.

This is the film Sam Raimi fans have waited for since the early 1990s. Seemingly tempered by studio pictures and a particular Marvel franchise, Raimi’s signature brand of unabashed directorial energy displayed on The Evil Dead Trilogy and Darkman has been suspiciously absent from his recent output. The sole exception occurred in Spider-Man 2 when Dr. Octopus first awakens after having metallic arms fused to his back, the arms tearing down doctors with all the fervor of a Deadite. Efforts like The Gift and A Simple Plan demonstrate what a fine storyteller Raimi can be, but Drag Me to Hell so perfectly combines his talent for constructing tangible characters with his ability to set the tone of a motion picture afire through technical and narrative trickery.

More than gross-out imagery, Raimi employs an arsenal of engineered scares, maddening disturbances, and frenzied excitement, all punctuated by the creepiness of Christopher Young’s nails-on-the-chalkboard score. Some of Raimi’s tools are age-old horror devices used on ghost story classics from yesteryear. His use of sound, for example, heightens the tension of every scene. Deafening bangs on doors, twisting metal screeches from a rusty gate, the horrible cries of the Lamia—the volume reaches such painful levels that whenever Christine is confronted, even she must cover her ears. Computer effects are sparse; impressive editing, nasty makeup, and top-notch camerawork render the film’s most thrilling moments. These jolts are sudden and frequent and unrelentingly effective, making the viewing experience a near-convulsive one, as we jump and twist in our seats throughout the procession of daunting attacks on the senses.

Not since The Exorcist has there been such an exhausting horror experience that embraces and quells disbelief with such expert viciousness toward the characters and the viewer alike. This Jack-in-the-Box-of-a-movie explodes with uncanny figures and bizarre manifestations, captured by Raimi’s camera-whooshes that move with speed and clarity only he could accomplish. Instilling a barbed sense of anxiety in the first scenes and refusing to ease up, Raimi has made a masterpiece of the genre—a film that doesn’t require ubiquitous subtext to layer its enjoyment. Instead, Raimi launches a full on attack, remaining simply and heartily devoted to scaring the bejesus out of you.