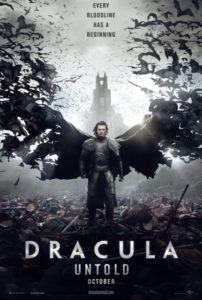 Vlad Dracula, the fifteenth-century Transylvanian prince later dubbed Vlad the Impaler, was purported to have tortured thousands of victims while defending Romania against the Ottomans. His reputation throughout central Europe claimed he took demented pleasure from torturing the enemies of his homeland, which involved, among other methods, cannibalism and using large stakes to impale countless victims. However fantastical or exaggerated the horrific myths about Vlad, few portraits throughout history could be considered flattering; and no matter the perspective on these accounts, his barbarism remains consistent. Even the Romanians who wrote of his heroism admitted to his wiping out whole villages with a sadistic vengeance. And so, his mythical legend has lasted for centuries until Bram Stoker forever likened Vlad’s surname to the grandest of all vampires.

Dracula Untold follows an annoying trend in Hollywood at present; it attempts to demystify one of the most enduring antagonists in either history or cinema. Much like Disney putting a sympathetic spin on a classic villainess in Maleficent, Universal Studios taps into their catalog of movie monsters and offers an alternate origin story that paints Dracula as a tragic hero with nothing but the noblest of intentions. Screenwriters Matt Sazama and Burk Sharpless conveniently avoid writing scenes about Vlad (here played by Luke Evans) impaling thousands and forcing families to eat one another. The film begins with Vlad having been home from war for some ten years, his wife Mirena (Sarah Gadon) and son Ingeras (Art Parkinson) by his side. But the threat of the Turks looms over his lands, and the new Sultan, Mehmed II (Dominic Cooper), wants 1,000 Transylvanian boys—including Ingeras—for his army.

With no chance of fending off the Turks with his own small army, Vlad seeks out a cursed vampire (Charles Dance) living in a nearby mountain, and the creature offers Vlad a wager of sorts. If Vlad drinks the vamp’s blood, for three days, he’ll have the supernatural strength and powers needed to destroy the Turkish army. But for those three days, Vlad will be plagued by an insatiable bloodlust, which, if appeased by the taste of human blood, will forever transform him into a vampire. If he resists drinking blood for this trial period, then his mortality will be restored and the curse lifted. (Hint: He doesn’t make it.) And so, with his newfound powers, Vlad discovers he can sense enemies from miles away and transform himself into a swarm of bats. But he also realizes that sunlight and silver will burn him. No matter, his enemies are slaughtered without much effort, but in the end, Vlad adopts his fangs forevermore, and the legend is born.

Beyond its basic predictability, Dracula Untold is frightfully stiff at 92 minutes, plodding along with none of the scares or thrills first-time director Gary Shore undoubtedly hoped to achieve. His production borders on monochrome, with cinematographer John Schwartzman’s color palette reduced to a series of muted blues and grays, all of it drenched in shadows so dark that the viewer struggles to see the action through the haze. And when the frame isn’t zooming around in CG-enhanced motions inspired by Peter Jackson’s flights over the battlefield in The Lord of the Rings series, editor Richard Pearson chops brief bits of violence and gore together to create the illusion of violence. But the film’s PG-13 rating omits all of the necessary bloodshed and sexuality usually associated with a vampire tale.

Ngila Dickson put care into her costumes, which were clearly inspired by Ishioka Eiko’s costumes in Francis Ford Coppola’s Bram Stoker’s Dracula. In fact, much of Dracula Untold seems influenced by Coppola’s underrated, operatic film, except the artless air of Shore’s CGI bats and wispy photography feels more like a lowbrow B-movie. Indeed, if the filmmakers went back and added tongue-in-cheek humor to the proceedings, then Dracula Untold would bear an uncomfortable resemblance to Van Helsing. But the lackluster formal approach doesn’t match the film’s attempts at grandiose, takes-itself-serious tragedy, and the actors never seem sure if they should be playing a scene with a campy or dramatic inflection. Through it all, the film’s attempts to make its subject’s mass murderer a heroic, tragic figure succeed only in a misapplication of style and intent, and reminding us that sometimes things should remain mystified.