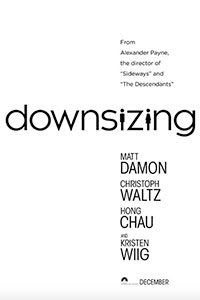 In Downsizing, writer-director Alexander Payne sets aside the deadpan satire that has distinguished his work from Citizen Ruth (1996) to About Schmidt (2002) to Nebraska (2013). Although his penchant for social commentary remains intact, the packaging is much different than his usual tragicomedy or road movie. Payne attempts an ambitious blend of high-concept science fiction and a much more obvious humor than he’s accustomed to, both in service of an ingenious concept: to reduce the planet’s rampant overpopulation, a new shrinking technology has been developed that reduces people down to about five inches. However, most people who partake are less interested in the positive effects on the ecosystem than on their financial portfolio. When you’re smaller, your money goes further. Any Average Joe with a middle-class income can live like a bite-sized king. The only downfall is being irreversibly small (and possibly eaten by a cat, a notion this film does not explore). The concept would have made an excellent Dark Mirror-meets-Honey, I Shrunk the Kids episode, except that Payne stretches the film for well over two hours and never quite realizes the possibilities of his central conceit.

Matt Damon stars in his We Bought a Zoo (2011) milquetoast mode, playing everyman Paul Safranek, another of Payne’s Midwestern dopes from the director’s home state of Nebraska (Paul works for Omaha Steaks, fulfilling a product placement quota). Faced with the financially strapped realities of their rank and file existence, Paul and his wife Audrey (Kristen Wiig) decide to “go small” into the scaled-down world. But after Audrey panics at the last moment, Paul finds himself alone in his new miniature surroundings, called Leisure Land Estates, and most of his money handed over in a divorce settlement. Now in an even less impressive setup than his large-scale life, Paul lives in an apartment building under a Serbian importer and party animal, Dusan Mirkovic (Christoph Waltz, trying to hide his German accent beneath a Serbian one). Although he was a physical therapist in the “big world,” Paul now serves in a customer service phone pool. Alone and unsure of his future, Paul seems to latch onto any idea at all, making him another in Payne’s long line of characters trying to figure out where their lives have gone wrong.

Payne has a way of looking at his protagonists rather than inhabiting them, often making their aimlessness and more pitiable qualities the subject of humor. He seems to laugh at and even detest his own characters at times. Besides being a dullard, nothing ever works out for Paul. His plans fall through, his dreams prove underwhelming, and his luck is downright bad. He’s the butt of the film’s joke. Then Paul meets Ngoc Lan (Hong Chau), a one-legged Vietnamese activist and dissident who once protested their pocket-sized microcosm, but she now serves as a cleaning lady and tends to the poor in mini-slums on the outskirts of Leisureland—outside of the protective net that keeps the smalls safe from bad weather and birds. However noble and certain her character, Payne treats Ngoc Lan with the same disregard as, well, everyone else in the film. Her broken English reeks of diet racism through accent discrimination. She becomes a crude joke, with Payne looking down on her as a noble simpleton. And though he allows the character a number of Downsizing‘s most affecting moments, she never completely breaks free of the mean stereotypes that Payne uses to characterize her.

In the film’s second half, Payne and his co-writer Jim Taylor engage in an environmental message that acknowledges a current scientific consensus: humans are not long for this planet. While the characters in Downsizing feel better about themselves for increasing their personal sustainability and reducing their carbon footprint, there’s plenty of talk in the film about another extinction event, or simply the gradual decline of the human race. In any case, even as Payne seems to champion the pro-environmentalist act of downsizing, the narrative trajectory veers into a confused, rather narrow theme about serving people in the here and now, instead of worrying about the future—a message that contains a surprising lack of foresight given the film’s daunting collection of facts (and fictionalizations) about our dying planet and continued flirtation with extinction.

Downsizing has a considerably larger budget than most of Payne’s indie sleeper hits, but the special FX used to create juxtapositions between the normal world and the small one are less than impressive. Payne has never been much of a visual storyteller, and given the film’s reliance on big-small visual contrasts for a laugh, the green screen work seems underwhelming. Seeing the world from another perspective should be an awe-inspiring experience, and while many of the characters feel such awe (for instance, over gigantic butterflies), the audience does not. Ultimately, Payne suggests that Paul should embrace the chaos and disorder of life to get more out of it, and at the same time mocks his new life with Ngoc Lan. The director squanders a bold concept in service of Downsizing‘s message about living life and not trying to choose a predestined, branded form of it. And as much as that message resonates, and as much as seeing another side of Payne is interesting, the meandering story is in need of a reduction and simplification.