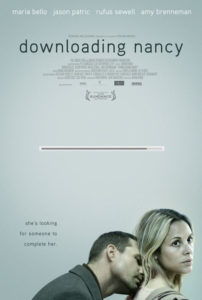 Suicide cases in movies always say, “You don’t have a clue what real pain is.” When it comes to the characters in Downloading Nancy, you won’t want to know their pain, because it’s represented with agonizing misery and the darkest of woe, then punctuated by self-inflicted mutilation. This hideous indie drama not only pushes the viewer’s tolerance for the depiction of depression and violence on film, but it fails to justify any of the grotesque deeds shown. It amounts to a sick character study told merely for the sake of its disturbing nature.

The film opens with narration by Nancy, played in another daring performance by Maria Bello, whose track record includes Auto Focus and A History of Violence. “Death is like sucking pure oxygen,” she says. “And life, it’s like being stuck inside the wrong house looking for a way out.” She’s a sadomasochistic housewife that gets off on cybersex, arcade games, and self-mutilation. Indeed, she believes love is pain, and that if you let people hurt you, you’re showing them how much you love and trust them. Married for 15 years to her unaffectionate, golf-obsessed husband, Albert (Rufus Sewel), who designs some kind of virtual putting lounge for airport bars, Nancy is desperate to feel.

Exploited as a child by an uncle, Nancy was convinced by her abuser that he loved her. Nancy tells this to her bungling shrink, Carol (Amy Brenneman), who can’t seem to penetrate her patient’s messed-up psyche. Mid-session, Nancy leaves the couch to cut herself in the bathroom with razor blades for “release.” What she’s looking for, however, is the ultimate release of death. For that, she scours the internet to find someone to kill her. She has tried dozens of times with various would-be hitmen, but she has found only phonies scared off by how serious she is.

Then Nancy meets Louis (Jason Patrick), who is serious-as-a-heart-attack when he says he’ll kill her. She leaves for Baltimore to meet this suicide assistant, and together they engage in the unhealthiest love affair ever known. Things start out with cigarette burns, advance to walking blindfolded on a path set with mousetraps, make a bloody detour in a hardware store, and end with a psychosexual finale. Then, breaking up the linear narrative, the story jumps to Louis visiting Albert and confessing what’s happened. As you might imagine, the confession doesn’t play out too well for Louis. Elsewhere, flashbacks show how horrible Nancy’s emotionally dead husband treated her; he’s just as demented, but he bottles it up by simply not acknowledging her existence. And in the end, we’re not sure who’s more troubled, Nancy or Albert.

Downloading Nancy isn’t an easy movie to connect with, and the visual presentation doesn’t help. Former commercial and music video helmer Johan Renck directs this downer picture without much color. The story is illustrated in gray saturations and staid camerawork, distancing us from the characters even more than the plot has already done. Screenwriters Pamela Cuming and Lee Ross have scratched away any hope of emotional resonance; their characters are too committed to self-destructive behavior. Audiences can only take so much ruin before they give up, and it feels like everyone in this story gave up a long time ago. After about twenty minutes, you just wish they’d get it over with already.

Based in part on true events, the relationships between the four central characters are disturbing at best, but they don’t resolve anything as the story plays out, barring perhaps some oversaturated metaphor about love being the equivalent of pain. Each role is more detestable than the last, regardless of whether the four above-mentioned actors give impressive performances. You may even feel like applauding for Bello once this nasty little love story reaches its conclusion, though you won’t have felt a thing toward her character except for disgust. Renck doesn’t do much beyond exploit the bizarreness of the real story, hoping the shock value will make up for the lack of reason behind it.

Downloading Nancy will be one of the more uncomfortable movie experiences you’ve ever had, unless you avoid it altogether, which may not be a bad idea. This is coming from an avid lover of David Cronenberg’s unsettling “venereal horror” like The Fly and Videodrome. But Cronenberg’s films always harbor an intense philosophical purpose, whereas the utter pointlessness of this dribble leaves the viewer with a numbing sense of ennui. If you’re searching for meaning, search elsewhere. This bleak, dreary film poses as a complex character study about pain, although it falls short of accomplishing anything besides fetishism and psychobabble.