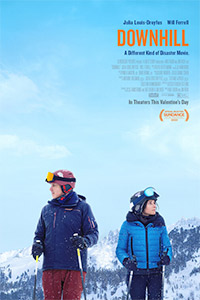 Noting the differences between Ruben Östlund’s Swedish black comedy Force Majeure (2014) and its English-language remake Downhill, released by the mini-major Fox Searchlight, is like following a schematic of European and American stereotypes. In all the places that Östlund’s film relied on necessary silence, nuance, and depth, the version by directors Jim Rash and Nat Faxon proves loud, unsubtle, and surface-level by comparison. The understated performances by Johannes Bah Kuhnke and Lisa Loven Kongsli in the original have been reimagined by Julia Louis-Dreyfus and Will Ferrell. The comedians play Billie and Pete, a married couple on vacation with their twin sons at an Austrian ski resort. When a controlled avalanche suggests imminent danger, Pete grabs his phone and darts away rather than protect his family. It was a false alarm, but his moment of panic has left his family shaken and unable to trust their guardian. The film takes everything that was richly constructed and sophisticated about Östlund’s scenario and Americanizes it. If the 86-minute runtime (down from the original’s two hours) is any indication, Downhill is the fast-food version of Force Majeure’s four-course meal.

The new film adopts the structure of an indie comedy, familiar territory for Faxon and Rash, who made The Way, Way Back in 2013 with stars Steve Carell, Toni Collette, and Sam Rockwell. The directors make films that debut at Sundance, despite already having a distributor. They’re feigning the virtue of independence with their marquee names and niche audience, delivering a trick of branding meant to convince their key demographic that there’s something original here. But Downhill is an impostor. There’s no sincerity or authenticity, just a bunch of talented people trying to recapture the voice of an original artist. Even so, the film proves even more disappointing because there are moments where the comedy works and the performers shine. Faxon and Rash collaborated on the screenplay with Jesse Armstrong, and the revised material, which defines Billie and Pete by their Americanness, offers a couple of riotous moments. But they’re contained in an otherwise overwrought treatment of a story that, in its original form, was marked by its brilliant passive-aggressive turns.

Downhill situates itself firmly in cringe-comedy territory, as Pete, his disastrous survival instincts having traumatized his family, tries to wiggle out of the situation. But no amount of ignoring the problem or downplaying its significance will dissuade Billie, nor their two teenage sons, Finn (Julian Grey) and Emerson (Ammon Ford)—aged from the original’s toddlers, making for odd moments when Ferrell refers to himself as “daddy” to his boys. Ferrell might have been miscast as the selfish Pete; his presence is too broad. Moreover, the audience is too familiar with his brand of comedy to achieve the subtlety needed here. It’s understandable why he was cast; he’s an expert at holding silences to hilarious effect. But even as you can feel him holding back, you expect something silly to follow, which betrays the character. Pete, who’s still coping with the death of his father eight months ago, goes through various stages to process how his family now rejects him: suppressed anger leads to self-pity, until he resolves to live by his father’s mantra, “Every day is all we have”—a carefree attitude that supplies Pete with an afternoon of drinking at a discotheque. Ferrell’s physical humor emerges on the dance floor, as well as during a family dinner afterward when he tries, poorly, to hide his inebriation from his family.

Louis-Dreyfus fares better as a mother and attorney who fussily oversees her family’s every meal and daily timeline. Like Ferrell, she’s playing a loud American tourist, the sort who files a complaint with management over the would-be avalanche. “We’re not in America where you sue because your coffee was hot,” responds the manager, played by Kristofer Hivju, who costarred in the original. Downhill shifts the focus from the father character, who was central in Force Majeure, to the wife. As Pete pouts about his situation, Billie confronts it, calling him out in front of his work friend Zach (Zach Woods) and his new girlfriend Rosie (Zoë Chao), who have stopped off at the resort during their European vacation. She also has an amusingly retaliatory response thanks to the absurd, wacky concierge Charlotte, played in caricature by Miranda Otto. Charlotte encourages sexual openness and, sensing the marital rift, gifts Billie with an opportunity for infidelity with a sexy ski instructor. Overall, Louis-Dreyfus’ capacity for bluntness and fed-upness, evidenced on every episode of HBO’s Veep, gives her character more of an inner life than Ferrell is capable of applying to his character.

Shot on location in Tyrol, a state in the Austrian Alps, Downhill has been given a more emphatic visual treatment. The colors are bolder than in Östlund’s film, which was saturated with white to underscore its ambiguity. Cinematographer Danny Cohen also frames the characters in closer medium shots, whereas Östlund preferred to watch his characters from a master shot’s distance, as if observing subjects in a torturous science experiment. Faxon and Rash employ some of the visual symbolism used by Östlund, such as the stark mirror line of division in the resort bathroom that separates Billie and Pete’s his and her sinks. But any attempt at obliqueness has been counteracted by the screenplay’s loud comic situations, such as Pete taking his boys on a mountainside alpine slide or Billie falling out of a public restroom stall while trying to masturbate.

Downhill might have been a passable remake if not for a few scenes near the end, where Faxon and Rash’s heavy-handedness becomes impossible to ignore. The climactic scene where Billie articulates everything to Pete in a big speech, during which the score by Volker Bertelmann swells and amplifies, spells out themes that Östlund left nebulous. The final moment, where the couple once more evades some falling snow, feels more suitable for a sitcom finish—it’s almost surprising that Faxon and Rash didn’t freeze the frame and roll the credits. Whereas Force Majeure wanted its audience to observe human behavior and judge the complex situation for themselves, Downhill presents every emotion and situation with dull, unmistakable clarity. Still, one cannot help but wonder what would happen if Force Majeure never existed. Would it be easier to appreciate the remake for what it is, not what it wasn’t? Perhaps. But Östlund’s film does exist, and Downhill remains a cheap American knock-off.