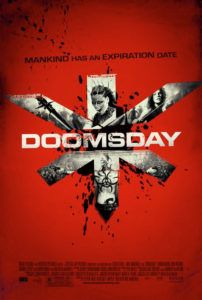 Doomsday zooms right past revered idolatry and leads straight into downright thievery, as filmmaker Neil Marshall (writer-director of the cave-centered splatterfest The Descent) constructs what’s either a sloppy ode to John Carpenter or a pathetic rip-off of several films from Carpenter’s filmography. And so, from the opening credits on, we’re bombarded with frustratingly blatant Carpenterisms, all of which are replicated with laughably bad cohesion.

As director of groundbreaking classics like The Fog (1980), Big Trouble in Little China, and In the Mouth of Madness, there are few better action-horror filmmakers to emulate than Carpenter. He conceived the original Halloween (but none of its lame sequels) back in 1978, put typically veiled Lovecraftian horror under the spotlight with his masterpiece The Thing (itself a remake of the 1951 sci-fi classic), and gave audiences the longest fistfight ever put to film via Roddy Piper and Keith David in They Live. Ironically, Carpenter spent most of his career emulating Howard Hawks, though he was original enough to blur the lines between his work and that which he sought to imitate. By working in different genres than Hawks (who is best known for comedies and Westerns), Carpenter made homages based on Hawks’ conceptual action and style.

Marshall, alternatively, works in Carpenter’s genre(s), taking directly from his iconic oeuvre, right down to Carpenter’s oft-used title font (!). Opening with vintage computer schematics outlining the new formation of Hadrian’s Wall, originally a Roman fortification to keep Scotland’s mobs out of England, we see a pitch-perfect copy of Carpenters schematics from Escape from New York (and, I suppose, its maligned sequel Escape from L.A.). Whereas Carpenter’s segmented land was used to keep society’s criminals inside an inescapable prison, Marshall’s walled-off Scotland encloses those infected with the Reaper virus—a vicious disease that twists people into boil-ridden creeps recalling “The Infected” from 28 Days Later.

Some thirty years after the virus claims Scotland, it pops up again in London, threatening another major outbreak. But the corruptible Prime Minister of England (Alexander Siddig, from Star Trek: Deep Space Nine) has a secret: survivors of the plague remain inside Scotland’s walls, living possibly by cure, possibly by immunity to the Reaper virus. Police chief Nelson (the great Bob Hoskins, in a background role despite second-billing) assigns Eden Sinclair (Rhona Mitra, from Skinwalkers)—Marshall’s one-eyed female facsimile of Carpenter’s archetypal anti-hero Snake Plissken from the Escape movies—to find it. With her porno star name and constant, pouty scowl, Sinclair comes off like some “hottie” playing dress-up on Halloween, surely a direct-to-video-worthy performance for Mitra.

In quarantined Scotland, Sinclair and her crew search for Dr. Kane (Malcolm McDowell), a known survivor with a possible cure. To find him, her team must fight through an army of regressed uninfected survivors decked-out with Mohawks and bondage attire, all feeding on a steady diet of human flesh. Combinations of the marauders from The Road Warrior and the scrap metal-wielding Martian creeps from Carpenter’s Ghosts of Mars, the scavenger-types are led by the whacked-out punk wannabe Sol (Craig Conway), who communicates through various degrees of screaming

Marshall’s already absurd film challenges all realms of silliness when Sinclair is guided to Kane’s hideout by his daughter, Cally (MyAnna Buring). Set in the medieval highlands, Kane and his followers have developed a segmented new world in ye olden times—forcing his supporters to don antiquated armor and raggedy garb in hopes of simulating better days. McDowell’s Kane was meant to be a movie-stealing role, one Marshall sought to bring Sean Connery out of retirement for; alas, Connery said no (if he denied Spielberg for the new Indiana Jones movie, Marshall never had a shot). But Kane and his nerds are no better than a group of Civil War re-enactors, chasing Sinclair away into the film’s third genre, a high-speed car chase recalling the aforementioned Mad Max movie.

With delusions of grandeur at every turn, Marshall’s post-apocalyptic, gore-heavy pilferage of other source material does little more than make for a good drinking game (take a shot whenever you see a Carpenter-derivative scene or plot point or character; you’ll be in detox after the first half-hour). Indeed, my screening involved plenty of (quiet) mocking remarks, as the product remains laughably bad—an assemblage of better movies by better filmmakers, each with more talent and imagination than Neil Marshall or his Doomsday disaster.