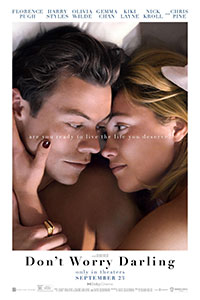 In Don’t Worry Darling, the title’s reassurance conceals a patriarchal nightmare. Olivia Wilde’s sophomore effort examines pre-feminist 1950s domesticity with clear nods to the conformist satire of The Stepford Wives and the paranoia of Philip K. Dick. Headlined by Florence Pugh and Harry Styles, who play the happily married Alice and Jack, the lavish production takes place in a cul-de-sac utopia where the professed freedoms look more like a prison, particularly for women. It’s a sharp genre turn for Wilde after her debut feature, the raucous last-night-of-school teen comedy, Booksmart (2019). Unfortunately, the film’s convincing performances and rich production design are bound to be overlooked because of the off-screen tabloid drama that has surrounded the film’s release, none of which is worth your time exploring. Even more disappointing is that Don’t Worry Darling keeps your attention for its runtime, but afterward, the pretty façade crumbles under the faintest scrutiny, revealing a structure riddled with plot holes. Although initially tense and immersive, neither Katie Silberman’s screenplay (based on an earlier script by Carey and Shane Van Dyke) nor Wilde’s direction deliver an ending that satisfies.

The opening scenes play like something out of Mad Men. A record player hums Ray Charles’ “Night Time Is the Right Time” while three blissful couples imbibe martinis and get sloppy drunk. “Work hard, play hard”—that’s the motto of Frank (Chris Pine), who masterminded this cookie-cutter community nestled in an isolated desert valley. In the morning, the men head out to work on the top-secret Victory Project while the wives remain home, cleaning, doing laundry, preparing dinner, and greeting their husbands at the door with a drink in hand. Some days, the wives attend a ballet lesson taught by Frank’s icy wife, Shelley (Gemma Chan), who tells her pupils, “Remember ladies, there is beauty in control. There is grace in symmetry. We move as one.” It’s a refrain that sounds like a mantra of obedience, and the picture of Frank hanging in the dance studio doesn’t quiet our feeling that this weather-controlled ‘50s paradise isn’t authentic. Moreover, the cast’s non-issue diversity isn’t reflective of this era’s whitebread reality—an anachronism hinting at the artificiality of this world and the film’s prevailing interest in power and gender.

Don’t Worry Darling is all second act. Within minutes, the viewer questions the veracity of this shimmering veneer, especially after Alice sees hallucinatory flashes in her head—images from a Busby Berkeley musical by way of David Lynch (never a good sign). The film fails to convince us that its world is real and, after the inevitable twist, there’s little exploration of what’s really going on. In the meantime, Wilde fills the runtime with a creepy tone and effectively haunting details. Take the community signs that read, “What you see here, what you do here, what you hear here, let it stay here.” Or consider how Frank narrates television commercials and radio broadcasts, how his company supplies the community’s food, and how he declares his intention to create “Freedom from society’s arbitrary regulations.” Indeed, Frank has a real David Miscavige thing going on, evidenced by the culty chanting at his company parties: “What are we doing? Changing the world!” and “Whose world is it? Ours!” Anytime a group of men shouts these phrases in unison, you know you’re in trouble. 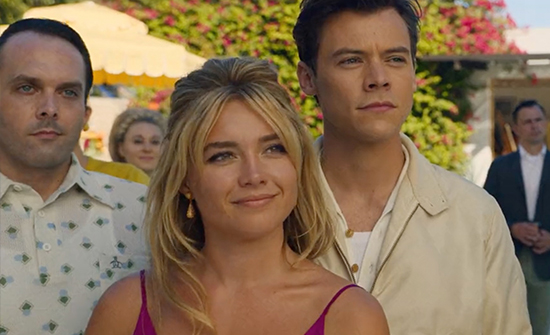 Wilde also deploys creepy-for-creepy’s-sake visuals, such as when Alice plastic wraps her face or finds herself pinned behind a moving window. These sights don’t add much to the mystery, but they do look neat in a trailer. Luckily, Pugh’s presence sells the ominous mood and keeps us involved, as does the intense breath-inflected score by John Powell, both of which recall Midsommar (2018). Soon enough, the situation worsens after a neighbor, Margaret (KiKi Layne), fuels Alice’s misgivings when she says some cryptic things—“Why are we here? We shouldn’t be here.”—before killing herself. However, everyone in charge, from Frank to his right-hand man, Dr. Collins (Timothy Simons), insists that Alice didn’t see what she thinks she did. And she receives the same treatment after seeing a plane crash in the hills; she races into the dry terrain to help, only to stumble upon the Victory Project headquarters. Alice passes out, and when she comes to, Jack tries to tell her it never happened. The trouble is, the more questions Alice asks, the more Jack warns her that challenging Frank and questioning their community could mean the end of their life together.

Don’t Worry Darling might get a pass thanks to the attractive cast and gorgeous production design of Katie Byron, who recreates ‘50s décor straight from the catalogs, just as Arianne Phillips’ costumes look like glamorous approximations of postwar chic. Styles makes his big-screen debut with a capable performance that borders on surrealism during a dance on stage, and Pine makes an imposing Machiavelli. But Pine’s character never quite reaches full insidiousness, even though he’s obviously pulling the strings. When Frank spies Alice making love to Jack in his bedroom, he makes eye contact with her for a loaded moment that never has a worthwhile payoff. At least Matthew Libatique’s cinematography is fluid and bright, framing scenes mostly from Alice’s perspective—until her subjectivity breaks near the finale. Once the film goes into exposition mode, Wilde crams necessary plot information by showing us images in Alice’s head that she couldn’t possibly have seen. It’s an ungainly tactic that might have been more immersive had Wilde kept the proceedings with her main character. Instead, the ending feels like a hodgepodge, quickly pieced together and resolved to blow the viewer’s mind but not make them think.

Although I won’t explain what’s happening in Don’t Worry Darling, I will say it’s not altogether surprising. Allusionism is heavy with this one, and other movies were front of mind throughout. The titles I wrote down in my notes include Dark City (1998), The Truman Show (1998), The Matrix (1999), The Village (2004), The Island (2005), Inception (2010), Get Out (2016), and WandaVision (2021). The list could go on. Despite its derivativeness, I mainly felt positive about the film once the credits began to roll until the nagging questions started to compile and reduced the experience to a puzzle with more than a few missing pieces. (For instance: Whatever happened to that crashed plane? We never find out.). What’s disappointing is that Wilde explains the twist as though that’s all there is to know. The director barely explores the system built up around it; instead, the film’s unsatisfying explanation after the reveal practically invites the audience to poke holes in the setup.

Offering more questions than answers, but not in a way that makes the film more interesting for what it conceals, Don’t Worry Darling is missing something. Wilde’s stylish direction and precise command of her actors (herself included) result in a top-notch production. Some moviegoers might be able to overlook what the story lacks in favor of its glossy visuals and famous cast (after all, Pugh and Styles are “so hot right now”). But Silberman’s script feels more akin to a concept-driven episode of The Twilight Zone than an implications-driven episode of Black Mirror. It’s a chilling narrative about men who seek to control women, a salient theme. Still, it’s also convinced of its cleverness—overly so, given that Dick was writing similar concepts like Time Out of Joint over a half-century ago. Just when the film identifies the origins and cycle of gaslighting and manipulation at work, it feels like Wilde has made her point, so any open-ended questions and unclarified details are unimportant. Ultimately, the film has promise, but its failure to develop a fuller mythology robs its characters and themes of their potential.