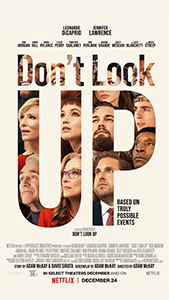 Years ago, in my more optimistic days, I used to think that the world needed some manner of global threat to erode the divisions between people. Maybe I watched Independence Day (1996) and Armageddon (1997) too many times as a teenager. But it seemed like all the world needed was some other-worldly force to introduce a little humility and understanding to convince the human beings that their differences were meaningless. Since then, I’ve seen how people warp information or altogether ignore threats to our livelihood either out of selfishness or sheer stupidity. That’s the subject of Don’t Look Up, which claims to present a satire of how our over-mediated culture responds to a crisis and how fractured ideologies impede progress. Writer-director Adam McKay shows how infotainment, social media, celebrity culture, and capitalist motivations distract the human race from making an impact against world-threatening crises such as global warming and the pandemic. But the film doesn’t need to underline these trends; if you’ve been living in this world for the last two decades, you’ve experienced it firsthand. In that respect, the film is less a satire than an accurate reflection of our culture, albeit slightly exaggerated and dramatized for effect.

The film is a bit like watching HBO’s Veep in 2016. The political satire emphasized the venal and outrageously idiotic behavior of politicians and lobbyists, which in turn was called a frighteningly accurate depiction of Washington D.C. The humorous critique became pointless once Donald Trump’s stranger and more-depressing-than-fiction administration took over. With Don’t Look Up, McKay holds a mirror up to humanity, and the image he casts back isn’t pretty. The catalyst arrives in the form of an enormous comet. Michigan State University doctoral candidate Kate Dibiasky (Jennifer Lawrence) discovers a celestial body moving in the general vicinity of Earth. She brings her data to Dr. Randall Mindy (Leonardo DiCaprio), who does the math and discovers the six-to-nine-mile-wide comet will strike the planet in about six months, causing an extinction-level event. After a few calls and a flight to Washington, they eventually meet with the President (Meryl Streep) and her son, the Don Jr-esque Chief of Staff (Jonah Hill). They break the news: the world is going to end. More concerned about the media’s response to her supreme court nominee, the President poo-poos them and responds, “What’s the ask here?”

As you can already tell, McKay signed a monumental cast to his $75 million Netflix production. If the top-billed DiCaprio and Lawrence don’t convince you, there are also Streep and Hill, plus Cate Blanchett, Timothée Chalamet, Tyler Perry, Melanie Lynskey, and Mark Rylance. The list goes on and on, suggesting yesteryear’s comic epics such as It’s a Mad, Mad, Mad, Mad World (1963) combined with the broad end-of-the-world ensemble of Tim Burton’s Mars Attacks! (1996). McKay’s screenplay—he shares a “story by” credit with journalist David Sirota—uses the comet as a platform for comic situations in which most of these performers feel underused. The sole exception is DiCaprio, whose Dr. Mindy is a wound-up ball of nerves and anxiety. A journalist takes one look and tells him to get “media training” before going on television. Kate’s response is to numb herself with medication and cannabis, resulting in a more shocked-into-remoteness performance from Lawrence. But DiCaprio’s twitchy, screaming, lip-chewing turn is the film’s greatest asset—a comic turn on par with his role in The Wolf of Wall Street (2013). 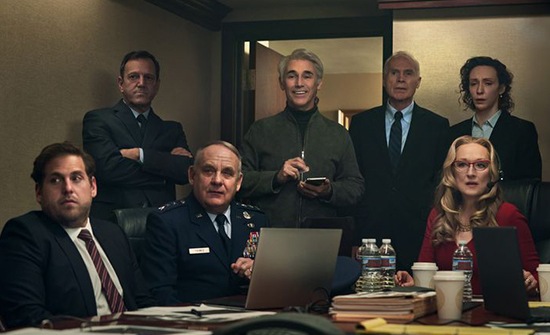 The screen story unfolds over the next six months as Dr. Mindy and Kate navigate political pressures and media appearances, ever unsuccessful in convincing anyone to spread the word that the end is nigh. Instead, everyone’s more concerned about the breakup of pop star Riley Bina (Ariana Grande) from her rapper beau (Scott Mescudi). When Kate, at her wit’s end, unloads a “We’re all gonna die” rant on a vapid talk show (called The Daily Rip, as in death), people respond with cruel memes and “impact denier” campaigns. However, Dr. Mindy becomes a media darling, labeled an AILF (astronomer I’d like to fuck). Using his newfound celebrity and eventual approval from the POTUS, he oversees a plan to dismantle the comet into smaller pieces. Enter Peter Isherwell (Rylance, in a role similar to his James Halliday in Ready Player One), a Musk-Zuckerberg-Jobs tech giant. He runs Bash, an Apple-style corporation and major financial contributor to the President. He suggests halting the planned demolition of the comet to save the precious metals worth trillions inside. Never mind that Isherwell’s plan hasn’t been peer-reviewed or proven scientifically; he sells the idea as a moneymaker to the administration, and they see dollar signs (think Elizabeth Holmes). Meanwhile, Dr. Mindy finds himself seduced by the media attention, and Kate spends her last days slumming it with a punk rock evangelist (Chalamet).

McKay’s erratic structure, conceived with editor Hank Corwin, results in a slapdash experience of random asides and zippy cuts. At the outset, the film introduces Rob Morgan, who plays NASA’s head of the Planetary Defense Coordination Office, and McKay flashes onscreen titles that explain the PDCO is a real thing. It might seem as though the director has created another Fourth Wall-breaking experience like The Big Short (2015) or Vice (2018). But this instance marks the only time the film communicates to the viewer directly, making it seem all the more inconsistent. Elsewhere, McKay crafts earthy montages that depict everyday people and the overlooked animal world operating in their bubbles. Perhaps they’re meant to remind us that the world is a beautiful, diverse place worth fighting for. Conversely, there’s a flurry of images produced on social media. Take the #launchchallenge where participants explode a low-grade firework in their face, or the opposing “Don’t Look Up” campaign that challenges people not to believe their eyes. Perhaps they’re meant to remind us that the world is sometimes frighteningly stupid.

Although I tend to agree with McKay’s worldview and identify with his cynicism about politics, media culture, and humanity’s general short-sightedness, his methods as a filmmaker rarely convince me. Don’t Look Up might be the exception, despite its broad and unsubtle satire, and its curiously America-centric vantage point for a film about a global threat. It’s like watching Mike Judge’s Idiocracy (2006) and recognizing so much of our world’s stupidity in the film, until it serves only as a depressing reminder of our downswing as a species. He’s preaching to the converted and might prompt the like-minded to declare, “Tell me something I don’t know, Mr. McKay.” Still, if you can get over the sloppy structure and familiar characterizations, the film’s all-star cast is a pleasure to see. Everyone’s clearly having fun delighting in our impending misery, myopic greed, and existential panic. Though Don’t Look Up probably won’t change any minds, it reminds us that, when the time comes, a natural disaster won’t cause the end of humankind; it will end because humanity is too self-centered to respond appropriately. In the end, the film feels like Kate breaking down on national television—messy, but a genuine sentiment nonetheless.

(Note: This review was originally suggested and posted to Patreon on December 29, 2021.)