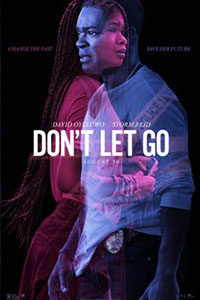 A good time-travel movie depends on the strength of its sci-fi rules. It can bend and contort the space-time continuum, make leaps through time, or cause the protagonist to experience the same day over and over, but its success hinges on the script’s ability to define the rules that propel the plot and characters. In Back to the Future, when Marty McFly corrects the past, and his siblings magically reappear in his family photo, the rather silly idea of the picture serving as a status bar of Marty’s objective works because it’s been firmly established—it has been tied to every other element of the story, and so the audience accepts it. But when a time-travel movie is careless about the rules, the characters and scenario usually fail to resonate. Such is the case with Don’t Let Go, a high-concept thriller that recalls the undercooked Déjà Vu from 2006: it’s a time-travel murder mystery with a flimsy setup, and though the acting and technical chops behind the production serve it well, the viewer is left trying to parse too many disparate elements of the scenario.

Star and producer David Oyelowo plays Jack, an LAPD detective whose niece, Ashley (Storm Reid), depends on him. She has an unreliable father (Brian Tyree Henry, barely used) with a criminal past, which inevitably comes to the fore when Ashley and her parents are found brutally murdered. For much of the dour first 20 minutes, Jack, shattered, attempts to investigate their deaths. But then he receives a mysterious call on his cell phone from Ashley, who’s supposed to be dead—in fact, she is dead. Except, Ashley is calling from four days in the past, before her murder. In a situation that brings to mind Frequency (2000), some unexplained technological goof allows someone from the present to speak with a deceased loved one from before their death. Jack uses this strange and dramatically convenient phenomenon to solve, and perhaps even prevent Ashley’s murder.

If you check out Don’t Let Go on Rotten Tomatoes, you’ll see a median score based on a few dozen reviews of a different movie. Most of those assessments stem from its premiere at the Sundance Film Festival earlier this year, when it was called Relive and was panned for the story’s convoluted setup. According to the press notes, writer-director Jacob Aaron Estes decided to re-edit after the initial, lukewarm reception at Sundance. But rather than leave material on the cutting room floor, which is what usually happens after a festival screening, the filmmaker reincorporated some excised subplots to deepen the murder-mystery elements of the story. Even so, Don’t Let Go falls victim to the phenomenon of a casting giveaway. This is where an otherwise inconsequential supporting character turns out to be the bad guy, except we could see it coming because a notable actor is in the role—and you just know the characters played by Alfred Molina or Mykelti Williamson may end up having a more significant role in the mystery as it unfolds.

Although I didn’t screen the movie at Sundance, neither the whodunit aspect nor the science-fiction portions of Don’t Let Go were very well developed. The screenplay doesn’t bother to explain why Jack can suddenly speak to Ashley in another time or dimension or whatever. There’s no attempt at scientific reasoning, no random time-machine on the periphery, no throwaway theory from the resident physics enthusiast. Our only clue appears in the herky-jerky movements of the frame periodically, suggesting, but in no way confirming, an effect similar to what the time-traveler in Stephen King’s 11/22/63 experienced, where the universe seems to react when someone makes a change to the prescribed order. So when Jack asks Ashley to do something that might help save her life, but it will also alter the natural course of things, Father Time pushes back. Alas, Estes leaves the theme concerning the question of free will or predestination unexplored.

But Estes has a talent for pacing and creating volatile situations. Several scenes that involve gun violence prove shocking. He’s also a gifted director of actors, as he’s able to draw out excellent performances from Oyelowo and Reid—even if the latter is forced to say things like “You’re my time-traveling uncle from the future” with the utmost seriousness. Visually, Israeli-born cinematographer Sharone Meir delivers a sharp-looking, David Fincher-esque aesthetic. And though Jack and Ashley are separated by days within the diegesis, Oyelowo and Reid share scenes because Estes and Meir connect them with close-ups in the style of Jonathan Demme—where the characters, centered in the frame, look directly into the camera, drawing the viewer into the emotion of a given scene. Unfortunately, the two credited editors cut their way to confusion between the movie’s two concurrent timelines. Near the end, when the two timelines begin to converge, the degree to which they’re connected, both visually and narratively, becomes questionable, if not downright confusing.

Indeed, the fabric of the story begins to unravel in the latter half. Characters start to behave in nonsensical ways because the script demands they must, and the science-fiction elements never receive much attention. Estes gambles with his audience on Don’t Let Go, risking that the viewer will overlook how the time-travel device has no catalyst. It doesn’t receive even the slightest explanation, presumably because Estes feels the journey of the characters will be enough. But the filmmakers who inspired his work here—he cites Christopher Nolan, a filmmaker who has made a career out of creating elaborate, self-contained, clockwork cinema—have gone to greater lengths to ensure tighter plotting and narrative cohesion. Moreover, the movie could have used another scene after the abrupt climax, just to ensure that viewers knew this was a movie about its characters, not its plot contrivances. But the movie never finds a balance between its concentration on character or conceit, and the resulting disproportion leaves it unsatisfying.