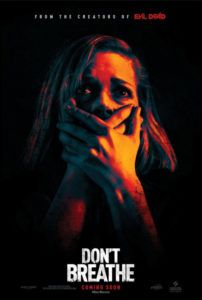 In the minutes and hours after watching Don’t Breathe, our natural tendency to ask questions about what we have just seen slowly chips away at our enjoyment of, what at first seems like, a gripping home invasion thriller. Not long after it’s over, the previous 90 minutes go from being an impressive exercise in cinematic tension to little more than a technically sound production hanging by the thin threads of a plot-hole-ridden script. Fede Alvarez reteams with Sam Raimi’s Ghost House Pictures after their 2013 remake Evil Dead to direct his screenplay, co-written by Rodo Sayagues. And because issues with Alvarez and Savagues’ script threaten to undermine the entire result of the otherwise superbly crafted film, several incongruous elements of the story will be discussed in this review. Consider yourself forewarned.

Set in Detroit, Don’t Breathe follows a thieving threesome that breaks into the wrong house. Alex (Dylan Minnette) has master keys and an alarm remote to each house since his father works for a home security company. Alongside his two friends, Alex targets homes managed by his father’s company, robbing expensive goods and selling to a shady fence. Rocky (Jane Levy) comes from a bad home and dreams of stealing enough green to escape to California with her young sister. Her boyfriend, Money (Daniel Zovatto), desperately wants to be street tough. They are not the brightest bunch, as Money demonstrates by leaving his DNA behind at a crime scene, and there’s an obvious tension between Alex and Money, as the former harbors some unrequited feelings for the latter’s girlfriend. But these characters are less important to the story than the basic setup.

Their latest score involves breaking into the home of a blind Iraq war vet (Stephen Lang), who may be keeping a six-figure insurance settlement in his house, which he received after his daughter was accidentally killed in a car accident. The home rests on an abandoned block in a rundown neighborhood, and our protagonists plan to gas its owner and search for the cash—and they do this without confirmation of the settlement (after all, people store money in bank accounts too). What they discover is that “The Blind Man” (as he is credited) isn’t your average dope. As Pedro Luque’s camera probes the home in long, fluid, computer-augmented takes, we see the blind man has a gun under his bed, bars on the windows, and an attack dog just waiting to strike. After he wakes up and kills one of the prowlers, he locks the others inside. Desperate to escape this apparent madman, they must whisper and tiptoe their way to freedom.

On purely technical terms, Alvarez delivers an impressive, rigorously detailed, and suspenseful feature. Production designer Naaman Marshall decorates the gross, unkempt interiors of the blind man’s house to creepy effect. Roque Banos’ score makes us shutter at the screeching metallic sounds. Most impressive is Luque’s camerawork; in particular, his ability to maintain clarity despite the film’s dark appearance. Even though a monochrome night vision sequence seems more appropriate to something in the “found footage” subgenre, Luque’s framing and use of unexpected angles are inspired. At the same time, the editing team (Eric L. Beason, Louise Ford, Gardner Gould) makes every shot count, including the occasional, carefully placed cut to a crucial object, such as keys or a hammer. The sound design is also excellent. Alvarez wants us to hear every footstep, every creak in the wooden floor, and every breath, as each serves as a warning.

Rather than keep Don’t Breathe a simple tale of survival that combines Wait Until Dark and Panic Room, and then flip-flops them, things prove overly complicated when we learn more about Lang’s character and his various atheistic overtones. He’s more than just an angry homeowner with a big money stash; he’s also a kidnapper and sociopath. The thieves discover the woman who ran over his daughter is tied up in his basement; and what’s worse, he has impregnated her to replace his child. Eventually, he captures Rocky and plans to do the same by injecting her with a turkey baster full of sperm. As he prepares the procedure, he remarks, “There’s nothing a man cannot achieve when he accepts there is no god.” Don’t Breathe seems to condemn the character for being an atheist, as though morals belong exclusively to those with religion. Meanwhile, Rocky prays for her release and soon receives an answer from her guardian angel—in the form of a ladybug. It’s all very silly and heavy-handed, especially when you consider that this god-fearing thief has robbed countless homes and, in the last straw, planned to steal from a blind man (predator or not).

Setting aside the film’s troublesome sense of moral justice and condemnation, Don’t Breathe also leaves us with questions ranging from nitpicky to gaping plot holes. The film ends with Alex and Money dead; the blind man’s kidnapping victim dies as well, but Rocky escapes with the money—which the blind man has allowed to secure her silence about his nasty kidnapping-for-baby scheme. A newscast confirms his cover story: that he stopped two male intruders, but they stole no money. But wouldn’t the authorities have found his dog, which Rocky trapped outside in a car when she briefly escaped? What about the kidnapping victim’s body or the blind man’s entire detainment area? Wouldn’t the police have found that stuff, along with a whole bunch of sperm in the blind man’s refrigerator, and asked some questions?

The moment when Don’t Breathe ends and discussion begins, we ask ourselves these and a myriad of other questions about many incongruous details in the film. Some might argue that overthinking a thriller of this kind is a mistake, but I would argue that the writers overthought their script by muddying a simple, straightforward thriller with a crazy nutjob and some half-baked rhetoric about atheism. What a shame, because the film boasts some fine performances—Levy is excellent at conveying both terror and strength, as she demonstrated in Alvarez’s Evil Dead—and a striking formal presentation. To be sure, Alvarez has talent to spare behind the camera; he simply needs to choose better stories to tell. Though it reaches some technical and formal heights, I admire Don’t Breathe more than I like it.