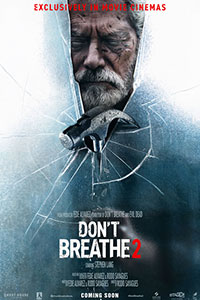 If a horror movie villain manages to hang around for enough sequels, moviegoers will eventually see him transition from a dreaded screen presence into someone who earns the audience’s favor. He might even bloom into an antihero. It took Freddy Krueger about three sequels before franchise fans started unabashedly rooting for the child-molester-turned-maniac, largely because he turned his victims’ nightmares into cartoonish worlds in which he served as a maniacal Bugs Bunny armed with knife-fingers and death puns. It took Jason Voorhees about two sequels before audiences starting cheering on his elaborate slayings of horny camp counselors. For The Blind Man, Stephen Lang’s skillful but sightless nutjob from 2016’s sleeper hit Don’t Breathe, it took only one sequel before the filmmakers tried to turn their villain into someone the audience roots for, even if our empathy for the old sicko remains uneasy and qualified.

In the original movie, Lang’s character, a war veteran named Norman who lost his daughter in a car accident, kidnaps and rapes a woman, then keeps her locked up in his basement in hopes of replacing his offspring. Some petty thieves who make the mistake of targeting him for a home invasion eventually stumble upon his underground secret. Norman shuts out the lights and uses his blindness as an advantage, like a role-reversed Wait Until Dark (1967). It was a slick and bloody scenario until director Fede Álvarez and co-writer Rodo Sayagues introduced a turkey baster, some heavy-handed symbolism, and an ending riddled with plot holes. Álvarez and Sayagues wrote the sequel as well, though Sayagues directs this time, offering a new set of issues that make Don’t Breathe 2 occasionally thrilling but ultimately unsatisfying. The narrative proves ugly and unconvincing, and its attempts to redeem an irredeemable movie villain are ham-fisted. Be warned; this review will address specifics.

The sequel opens with Norman rescuing a young girl who has barely survived a meth house explosion. He takes the girl for his own, eye-rollingly renames her Phoenix, and eight years later, he has raised the preadolescent girl (Madelyn Grace) on a lesson plan of survivalist skills. He also keeps her so isolated that she looks longingly at a nearby shelter for homeless children. Soon enough, some seedy-looking thugs, headed by Raylan (Brendan Sexton III), come snooping around Norman’s house to kidnap Phoenix. That’s when Don’t Breathe 2 indulges its gristly streak. Norman super-glues shut the mouth and nostrils of one goon, requiring his brother to poke a breathing hole in his cheek. He detonates another with a live wire and some propane. Norman’s Home Alone-style killings give way to a revelation: Raylan is Phoenix’s biological father, seemingly there to rescue his daughter from the rapist-kidnapper-psycho.

Álvarez and Sayagues raise questions about who’s worse, Norman or Raylan, in banal and obvious ways. Indeed, the script contains some Screenwriting 101 clues about where the audience should place their sympathy. There’s a basic tenet of fiction writing that defines heroes by how they treat animals. Your good-hearted characters will pet the dog; your evil characters will kick the dog. Norman keeps a Rottweiler to protect his home and Phoenix. Raylan shoots the dog, and when Norman finds the animal’s corpse, he mourns its death. Then, Raylan unleashes his own Pittbull to attack Norman. However, when Raylan recovers his daughter, he resolves to burn down Norman’s house with the Pittbull still inside. As Norman makes a last-minute escape, he refuses to let the animal burn. Sure enough, the movie reveals the twist: Raylan plans to harvest Phoenix’s organs to save his wife (Fiona O’Shaughnessy), Phoenix’s mother, who wrecked her insides cooking meth. But if you look at how they treat the dogs, you know well in advance where your sympathies will lie by the closing credits.

Much like its predecessor, Don’t Breathe 2 supplies an ode to David Fincher’s Panic Room (2002), complete with a camera that passes between balusters in a digitally augmented shot. Cinematographer Pedro Luque delivers impressively fluid camerawork and surprising visual clarity despite the movie’s persistent darkness. Elsewhere, Álvarez and Sayagues pay homage to Luc Besson’s The Professional (1994), curiously enough, since both movies follow a skilled killer who adopts and trains a teenage girl. When one of the gang members asks Raylan how many of them should try to stop Norman, Raylan responds bombastically, “All of you!”—at the same pitch as Gary Oldman’s famous “Ev-ree-one!” line from Besson’s actioner. Unfortunately, such reference points are more distracting than inspired, while the scenes that attempt genuine emotion fall flat, sometimes hilariously so. When Phoenix holds her bloodied surrogate father in her arms, then declares, “I can save you,” Norman’s corny response, “You already have,” provides unintentional laughter.

Although filled with well-composed scenes of violence and tension, Don’t Breathe 2 doesn’t leave the viewer much of a choice. Either you root for a killer who once sought to impregnate a woman in his basement dungeon, or you root for a father who would slaughter his daughter to save his wife. Given their varying positions on the evil scale, neither option is very palatable. So instead, we root for the one-dimensional Phoenix, who’s confidently played by Grace, though her character takes a recessive role in the proceedings. Oddly, Don’t Breathe 2 attempts to give Norman some measure of atonement, bathed in redeeming light no less. When the mid-credits scene suggests he’ll be back, no doubt he’ll be reborn into a full-fledged good guy. Why movies (and the audiences who see them) make sex offenders like Freddy Krueger and Norman into antiheroes will forever remain a sociological curiosity. Whatever its reasons, this sequel’s attempt to refigure its central character comes too early, robbing viewers of what might’ve been a truly horrific character in favor of some cheap and sensationalized narrative manipulation.