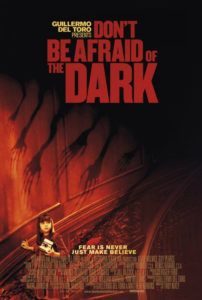 Revitalizing the long-dormant, long-unsatisfying haunted house subgenre, Don’t Be Afraid of the Dark features a script co-written by producer Guillermo del Toro that delivers an experience so unnerving it earns comparisons to Robert Wise’s original The Haunting from 1963. The story takes place in a vast Rhode Island manor filled with colossal staircases, shadowy alcoves, and a dreaded basement, while outside autumn winds blow dead leaves in through the front door and incite chills up the spine. In the bowels of the estate’s recesses are scheming, devious, whispering, deathly little creatures looking to escape and exact terror on a little girl for insidious motives. The dark and menacing backdrop, realized by comic artist and first-time feature director Troy Nixey, who was hand-picked by Del Toro for the job, radiates pitch-perfect spookhouse atmosphere that far exceeds any horror movie in these days of slasher remakes and “found footage” nonsense.

Del Toro’s screen story, conceived along with Matthew Robbins (Mimic) back in the late 1990s, was inspired by Del Toro’s first viewing of the original TV movie, which aired on ABC in 1973. The movie stuck with him for years and, along with countless other horror landmarks, remained in his head to later inspire his own series of grim tales. After he became established in Hollywood, he purchased the story rights and oversaw the remake. The original featured Kim Darby hounded by pruney creatures (little men in hairy costumes) while her skeptic husband doubted her experiences, but Del Toro’s script restructures the tale into one from a child’s perspective, a recurrent thematic choice in his Cronos, The Devil’s Backbone, and Pan’s Labyrinth—all films with child protagonists. Del Toro admits he sees the world from a child’s eyes, but he also recognizes that their vulnerability makes them more open, and susceptible, to the notion of monsters, which in turn heightens the audience’s involvement.

Bailee Madison carries the film as Sally, a 12-year-old all but abandoned by her West Coast mother into the care of her father, Alex (Guy Pearce), and his girlfriend Kim (Katie Holmes). They live in Blackwood Manor, the former home of a renowned artist and writer who disappeared at the end of his life; the massive project to restore this looming, mysterious house has drained every penny from Alex’s bank account, and so he remains preoccupied with all but his newly arrived daughter. Feeling lonely, discarded, and unwanted, Sally explores the grounds and helps discover the property has a secret basement, whose colossal metal entryway was blocked off and hidden by previous owners. Down in the dark, Sally hears murmurs, childlike voices softly speaking her name from behind a flue bolted to the wall. “We want to be your friends,” they say. “Let us free so we can play.” When Sally loosens the bolts, she unleashes something evil which has spent hundreds of years underground just waiting for the chance to feed, and of which only the cautious groundskeeper (Jack Thompson) seems aware. 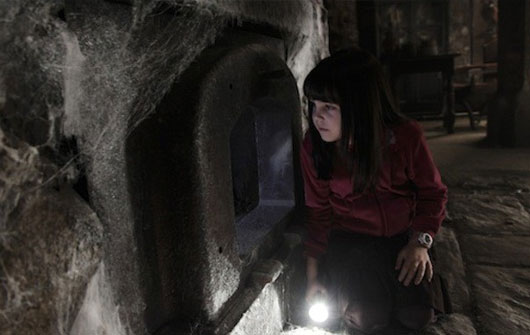 At first, Nixey resists showing these six-inch-high creatures; they remain hidden by shadow or shown only in silhouette, and they retreat when exposed to light. Their whispering becomes manipulative as they tell Sally her family doesn’t want her. “Come to the basement,” they say. Then, Kim’s dresses are found shredded by Alex’s missing razor, and who else but Sally could be to blame? Sally quickly realizes her new friends are not friends at all. Frightened, she refuses to confess what she’s set free, and only admits as much to a psychiatrist, who deems these little people part of a fantasy conceived by a child who feels cast off. Of course, Del Toro keeps with the original and brings the creatures out of the dark before long, revealing monsters whose appearance and mythology recalls the tooth-eating fairies from Hellboy II: The Golden Army. Rendered via expert CGI, these creatures are much grislier; they look as though they’ve spent hundreds of years underground.

Regardless of what the credits say, Don’t Be Afraid of the Dark feels like pure Del Toro in style and approach. Save for some very Hitchcockian touches that must be attributed to Nixey, as Del Toro isn’t known for such direct homage, moviegoers will have a difficult time differentiating Nixey’s and Del Toro’s styles. Take the score by Marco Beltrami and Buck Sanders (who together completed the wonderful music for Knowing); it enhances suspenseful moments with sharp strings and a building tempo, evoking Bernard Herrmann with every note. This is not to discount Nixey, whose name was all but overlooked in the marketing. But we cannot help but think of Del Toro throughout, not only because this haunted house movie doubles as a creature-feature with hideous beasties lurking in the shadows, but because of his apparent influence as a hands-on producer on each aspect of the production. From the moment Sally wanders into a hedge maze to find something dark and magical, to the design of the creatures themselves, Del Toro can be felt in every frame.

Developed under Miramax for a meager $12.5 million budget, the film went into release limbo after the studio’s recent sale, only to be rescued by FilmDistrict, who, fortunately, allowed the filmmakers to preserve its integrity without editing for the much-sought PG-13 stamp. Del Toro insists Don’t Be Afraid of the Dark is meant for younger audiences, despite the MPAA’s harsh R-rating. Certainly comparable, bloodier PG-13 films like Drag Me to Hell contain more gore and violence than this one. In a similar situation, Universal Studios was not so kind to Del Toro earlier this year when they refused to produce his passion project, an adaptation of H.P. Lovecraft’s seminal At the Mountains of Madness, with his intended R-rating, so perhaps Del Toro is lucky this film was released at all. But according to Del Toro, even though the film contains no swearing, nudity, or much direct violent content onscreen, the MPAA felt the experience was far too frightening for younger viewers. They might be right. After a grisly prologue that shows us what the creatures are capable of, violence is implied more than actually shown, and what’s more, appropriately shrouded by darkness. But the film contains a severe tone, painful suspense, and plenty of sudden shock moments to jolt you out of your seat.

Like many of the best horror films, such as The Thing and The Mist, this film begins with an idea that lingers in obscurity. That idea scratches from behind walls and whispers through vents, allowing the audience’s imagination to build suspense through our fear of the unknown. And then, with a vivid intensity, the unknown leaps from out of the blackness, reaching out to become a horrible, confronting reality. Nixey and Del Toro incorporate CGI creatures into this excellent haunted house material not to eliminate our imagination’s power to scare us, but to enhance the story through powerful imagery. The unknown is one of humanity’s great fears, and Guillermo del Toro has always been fascinated with putting a face to our nightmares. And to be sure, many moviegoers will have nightmares from Don’t Be Afraid of the Dark.