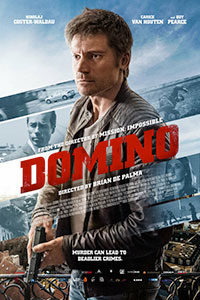 In the half-century of Brian De Palma’s varied career, some of his best films contain the voyeuristic impulses of Alfred Hitchcock, the sexual titillation of a provocateur, and the political intrigue of a vast conspiracy—Blow Out (1981) being the prime example. Within that framework, De Palma often demonstrates his pristine control over the filmmaking craft with several recurring visual and technical motifs, from his use of split-diopter lenses to extended shots, from his use of screens-within-a-screen to his penchant for elaborately conceived sequences of breathless tension. Narratively, he somehow combines his distrust of the establishment with a rich personal melodrama, often signaled by the soapy score by Italian composer Pino Donaggio. Because it contains all of the aforestated earmarks, Domino, then, should be another excellent De Palma thriller. Unfortunately, this late-career offering from the cherished director rings with a generic quality and undercooked screenplay, despite having nearly every element in place required for an excellent Brian De Palma film.

Having lost his commercial clout in the U.S. after a series of flops in the early 2000s, De Palma has had to seek financing for his latest projects in Europe, where ambitious independent financiers sometimes prove unreliable and controlling—a lesson learned by directors from Orson Welles to Terry Gilliam. De Palma’s attempt at science-fiction with Mission to Mars (2000) started the decline of his career, followed by the mind-bending and trashy Femme Fatale (2002); the disappointing murder mystery The Black Dahlia (2006); and Redacted (2007), the experimental indictment of the U.S. military’s presence in Iraq. After these both critical and box-office failures, De Palma sought backers outside of Hollywood. His first such production was Passion (2013), a remake of a French thriller that, like Domino, contains every component necessary to become one of the director’s best—something akin to Sisters (1972), Obsession (1976), or Dressed to Kill (1980). Alas, it was another creative and commercial disappointment relegated to a VOD release, similar to Domino.

De Palma has been quite open about his collaboration with Danish financiers and producers on Domino. “I never experienced such a horrible movie set,” he told The Playlist. Reports from the set suggest that the production would sometimes be without the funds to shoot, leaving cast and crew to sit around waiting, sometimes for days or weeks at a time. No wonder the resulting film has a disjointed quality—then again, this may be because the footage was reportedly taken away from De Palma and re-edited in post-production by the Danish producers, who evidently chopped the material down. Without the end credits, the runtime barely exceeds 80 minutes. De Palma is also quick to point out that he did not write the screenplay. Viewers curious as to why Domino does not proceed with the director’s usual urgency can look to screenwriter Petter Skavlan, who renders the plot about Danish police competing with the CIA to capture a notorious ISIS schemer utterly dull. 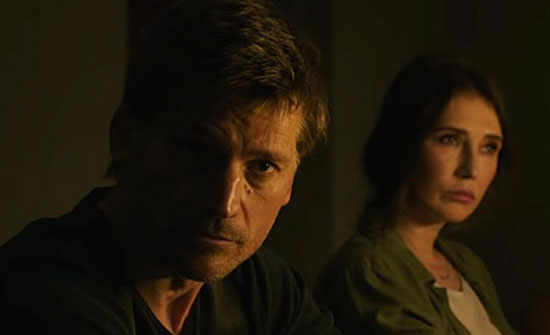 Nikolaj Coster-Waldau (from Game of Thrones) plays Christian, a Copenhagen cop so distracted by his naked and unnamed girlfriend, who completely disappears from the film after the first scenes, that he forgets his sidearm at home. When Christian and his older partner Lars (Soren Malling) respond to a domestic abuse call, he must borrow Lars’ gun, which leaves Lars defenseless to a near-fatal blow from the suspect, Ezra Tarzi (Eriq Ebouaney). The suspect seems to be an ISIS terrorist; however, unbeknownst to the Copenhagen police, Tarzi is actually a pawn of cell leader Salah Al-Din (Mohammed Azaay), who holds Tarzi’s family hostage, using them as leverage to make Tarzi into their soldier. Al-Din is the primary target of the CIA, and agent Joe Martin (Guy Pearce) wants to use Tarzi as an informer to capture him. Tarzi could be a sympathetic character caught between ISIS and the CIA, desperate to protect his family—something akin to an ill-fated Hitchcockian wrong man. But Domino doesn’t concern itself with his point of view; he’s rarely more than a plot device.

Though Christian faces a suspension from the force over forgetting his gun, his guilt over the situation means, predictably, that he now has a personal stake in catching the suspect. So does Alex (Carice van Houten), a fellow cop who was having a secret affair with Lars, resulting in her pregnancy. The film underscores the heightened melodramatics with Donaggio’s ham-fisted music, which sounds as if he composed every note without having seen the film, and what’s more, performed it on a synthesizer with an “orchestra” setting. As Donaggio’s notes take the material off the rails, cinematographer José Luis Alcaine over-lights every scene, giving Domino the look of a Brian De Palma knock-off. Alcaine is the longtime d.p. of Pedro Almodóvar, whose own Hitchcock influence has resulted in a knowing expressiveness and almost cartoonish use of color and lighting. Those heightened flourishes may be appropriate in an Almodóvar film, but when combined with De Palma’s penchant for controlled environments, the result looks artificial, mannerist, and stagey.

Domino is also devoid of political or ideological contexts, choosing instead to portray members of ISIS as one-note terrorists bent on killing for the sake of killing. A few throwaway lines about ridding the world of “infidels” assert their point of view, whereas Al-Din seems preoccupied with capturing the bloodshed on video. In one of the film’s only inspired sequences, Al-Din coaches a young female jihadi on how to approach her target; she’s armed with a gun on which two cameras are mounted, one capturing her expressions, the other facing out over the barrel of her automatic rifle. The resulting act of terror is difficult to watch, while playing with perspective in a way De Palma is known for. Another scene builds toward the bombing of a Spanish bullfight—in a stadium setting reminiscent of De Palma’s underrated Snake Eyes (1996)—and Al-Din hopes to capture the explosion on a drone-mounted camera. De Palma intercuts between the bomber, the drone, the operator’s remote monitor, and the cops trying to stop the bombing in a wonderful sequence whose conclusion draws from the ending Michael Powell’s Peeping Tom (1960), where the camera becomes a piercing weapon.

A few visually impressive moments occur in Domino, reminding De Palma’s fans why they keep coming back to his work for inspiration. Christian’s thrilling pursuit of Tarzi across rooftops and dangling off gutters, of course, brings to mind Vertigo (1958), and the basic dramatic architecture of the overall story is sound. But lodged in-between the film’s few exciting moments are traces of the troubled production, patchwork editing, and underwritten screenplay. This is unfortunate, as Coster-Waldau makes a capable leading man, whereas real-life couple van Houten and Pearce have been saddled with thankless roles—the former as the grief-stricken lover who saves the day by kicking a terrorist in the groin, and the latter a smarmy Southern-accented cliché of an American intelligence officer. With any luck, the 78-year-old director will find better projects in the future, as Domino earns its place at the bottom of his oeuvre.