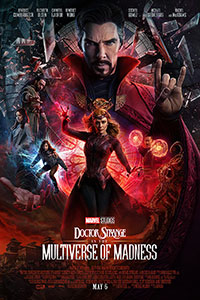 Doctor Strange holds a curious place in the Marvel Cinematic Universe. Often, he’s a device to compel or resolve plot elements, using a wave of his hand, magical object, or random incantation to restore order. His vast knowledge and egoism leave him somewhat limited as a character; even when passing through time and space, he operates on a single dimension. In his recent appearances, the significant talent of Benedict Cumberbatch has been reduced to playing an occasionally sarcastic, know-it-all straight man who relays expositional information and produces various light shows. Although 2016’s Doctor Strange established a romantic relationship with Christine Palmer (Rachel McAdams), the Master of the Mystic Arts has been so busy concocting ways to save the universe from Thanos and various Spider-Man villains—or altogether absent during the Blip—that there hasn’t been much time to explore him as a human being. And then comes Doctor Strange in the Multiverse of Madness, the character’s second solo film that considers, both literally and figuratively, his many dimensions. Although Doctor Strange the person has been on autopilot for years, the sequel shows interest in exploring the character while also delivering one of the, well, strangest superhero films in recent memory.

Multiverse of Madness also signals director Sam Raimi’s entrance into the MCU. No stranger to the superhero genre, Raimi delivered a twisted take with 1990’s Darkman before helping to legitimize Marvel movies with his trilogy of Spider-Man features starting in 2002. But it’s been nearly a decade since Raimi last directed, going back to Oz the Great and Powerful (2013). In his return, he takes over for Scott Derrickson, helmer of Doctor Strange, who left the sequel due to creative differences. Raimi injects his gory slapstick and classical comic-booky sensibilities into the proceedings and, as a result, Multiverse of Madness undeniably looks and feels like Raimi put his spin on the MCU house style. It’s everything one would expect from Marvel in terms of popcorn-munching entertainment, fan service, cheer-worthy cameos, and predictable resolutions—all while building on the Disney+ series WandaVision. Yet, Raimi’s style tests the limits of his PG-13 rating with imagery that genuinely disturbs. Many critics have even described the film as a bona fide horror movie, but that description might be a stretch. Instead, let’s use a term Raimi coined to promote his brilliant Drag Me to Hell (2009) and call Multiverse of Madness a “spook-a-blast” experience.

The screen story, written by Michael Waldron and punched-up by Raimi’s team throughout the production, finds Strange facing off against his compatriot, Wanda Maximoff (Elizabeth Olson)—the Avenger who lost her mind after sacrificing her love, Vision, in an unsuccessful attempt to stop Thanos in Avengers: Infinity War (2018). Utterly wrecked in WandaVision, she willed an alternate Vision and two imaginary sons into existence only to lose them all. But she became the Scarlet Witch in the process, gaining access to powers that augment her talent for tormenting minds and manipulating reality. However, given the arrival of the fractured multiverse (introduced in the Loki series), Wanda realizes that some alternate reality out there could house Vision and her sons, and play home to her family. She sees a means to explore them in America Chavez (Xochitl Gomez), a young empowered person who can hop between universes through star-shaped portals. Wanda plans to use America to find her children, even if it means killing an innocent girl. And so, Doctor Strange teams up with Wong (Benedict Wong) and a slew of sorcerers to stop Wanda and protect America. 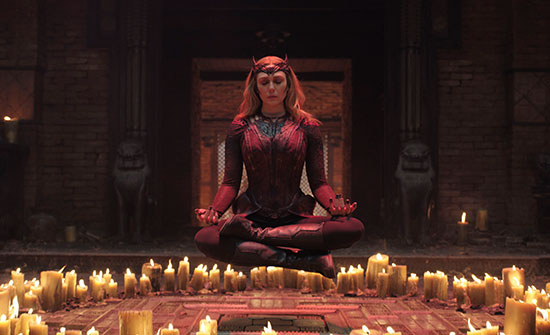 If all that sounds confusing as hell, rest assured, viewers unfamiliar with Marvel’s Disney+ shows won’t fail to grasp the general stakes or what’s happening from one scene to the next (so you can skip that mostly passable television content). Only some of the copious references and cameos might confound the unversed, but the motivations and immediate situations remain clear enough in stand-alone form. The film’s midsection involves universe-hopping galore, including a brief glimpse at wild reality variations that range from hilarious to inspired to frightening. Our heroes interact with alternate versions of themselves and other MCU characters, some familiar and others exciting and new. Meanwhile, Wanda bends minds and decimates bodies, and Raimi’s direction makes every death count—prepare yourself to gasp in shock more than once. But these events have a disposable quality, given the infinite number of possibilities across the multiverse, rendering moments that alternate between horrific and fun—yet also impermanent for the main characters.

Although I have glossed over specifics to avoid spoilers, I must say that the script’s character work in Multiverse of Madness gives the stellar cast the material to test their acting chops. When Wanda unleashes her worst self, the movie gets dark despite the teen-friendly rating. Olsen’s sympathetic, grief-stricken portrayal in WandaVision morphs into a monstrous performance, and her character’s trauma turns into obsessive motherhood and villainy. Wanda kills to unite with versions of her children in alternate realities, justifying her behavior as intense parental love. Still, Olsen clearly savors the opportunity to play an unhinged version of her character with a high capacity to generate morbid death. Doctor Strange, too, experiences some gradation when the character laments not making it work with Christine, who marries another man early in the film. Given his romantic loss of Christine while he was away during the Blip, he can empathize with Wanda’s loss of Vision. Even so, alternate versions of Christine prove equally out of reach, lending a sense of tragedy to Strange. After all, he and Christine could never work—he’s always more interested in “the scalpel,” in whatever form, than relationships. And while Wanda proves willing to annihilate countless victims to regain her children, Strange, at least our universe’s version of him, refuses such extremes to achieve happiness.

Visually, Raimi’s fingerprints appear everywhere, satiating fans keen to spot his many references to Evil Dead 2 (1987) and Army of Darkness (1993). Accompanied by a Danny Elfman score, Raimi deploys no end of kaleidoscopic visuals, cockeyed angles, and heightened POV shots with the help of cinematographer John Mathieson (Gladiator, 2000). The director also includes possessions, inanimate objects coming to life, a candle-lit séance, hideous souls of the damned, a reanimated corpse, and the inevitable cameo by Bruce Campbell (in a scene that replicates the actor’s physical humor from Evil Dead 2). Indeed, Raimi’s prankish presence behind the camera has proven he can inscribe even the most commercial of studio productions with his signatures—evidenced by his work on the Spider-Man films or Oz the Great and Powerful. The same is true here, leaving the characters to feel like playthings in a darkly demented fantasy. Although Multiverse of Madness boasts some jaw-dropping gore and grim material, it’s only a horror movie in the sense that, say, Army of Darkness is horror—meaning, it remains an MCU product, just accented with some freaky imagery.

Even though mastermind Kevin Feige grants Raimi plenty of control over oddball visual choices or visceral moments, the director must play in the MCU’s demarcated sandbox. The first hour builds conventionally until Raimi unleashes hell (meaning the Scarlet Witch) in the second half. Regardless, Multiverse of Madness doesn’t deviate from the standard plot structure audiences expect—the film doesn’t quite compare to the go-for-broke treatment of multiverse silliness and abstraction found in Daniels’ Everything Everywhere All at Once (don’t expect people with hotdog fingers, either). And so, a film set inside the endless possibilities of the multiverse somehow manages to feel self-contained, without universe-shattering implications for the MCU. In the trend of recent Marvel fare, it occupies a small panel in the cinematic quilt. Regardless, it’s a funhouse ride, thanks to Raimi, who enlivens the Marvel template with his visual flourishes and macabre horror-tinged humor (and my favorite post-credits scene in any MCU entry). It’s just enough to elevate Multiverse of Madness into “a Sam Raimi film” and augment the Marvel-ness of the story.