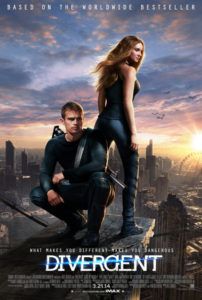 Serialized young-adult stories ranging from Stephenie Meyer’s Twilight to Suzanne Collins’ The Hunger Games allow teenage readers to lose themselves in catharsis as their favorite protagonist grows up in a search for identity. Divergent is not what its title suggests; the film adheres to genre formulas down to the last component, providing a familiar scenario for its heroine to break out of her dystopian society’s regimented social boundaries and find her way from adolescence to adulthood. Based on the first volume of Veronica Roth’s best-selling trilogy, the film’s chaste romance and fight-the-power themes conform to teen fiction requirements, but it’s all in the name of bankability. Indeed, Summit Entertainment, the studio responsible for adapting the Twilight and The Hunger Games franchises into hugely successful box-office monsters, has undoubtedly concocted another sensation regardless of its pervading familiarity.

Roth’s books take place in a post-apocalyptic Chicago, a decaying metropolis surrounded by walls to protect its inhabitants from who knows what. When asked what’s beyond the city, one character responds, “Let’s just say we need the walls.” The most unbelievable aspect about Divergent is that no one asks a follow-up question. But why do we need the walls? Is King Kong out there? Is this all an experiment by cracked university professors, like M. Night Shyamalan’s The Village? Don’t bother asking yourself these questions because they won’t be answered, at least not in this film. At any rate, people in this society are divided into one of five factions: Erudite, the resident scholars; the truth-tellers in Candor; the food growers of Amity; Abnegation, the modest and selfless leaders; and Dauntless, the soldiers who cheer and run and climb on stuff wherever they go. Each group wears a color to represent its tenor. Dauntless are garbed in leathery black gear, for example, while the humble members of Abnegation clothe themselves in shades of gray.

A part of Abnegation alongside her brother Caleb (Ansel Elgort) and their parents (Ashley Judd and Tony Goldwyn), Beatrice Prior (Shailene Woodley) wears a surprising amount of eyeliner and mascara for a faction that has restrictions on mirror time. She’s a contradiction, and even Beatrice’s test results are inconclusive about which group she should be a member of; she’s secretly labeled “Divergent” by the exam’s administrator (Maggie Q), who keeps these forbidden results hush-hush from the Powers That Be—represented by Erudite leader Jeanine Matthews (Kate Winslet channeling Hilary Clinton, or President Snow). Beatrice doesn’t belong in any group, she’s told. And you can bet that when Choosing Day comes, the moment when every teen gets to select which faction they want to be a part of, Beatrice doesn’t pick Abnegation. In a flourish curiously similar to the “sorting hat” from the Harry Potter franchise, Beatrice chooses Dauntless and, as her society dictates, she’s never allowed to see her family again. “Faction before blood,” everyone chants.

Having renamed herself to the hipper label Tris, our hero must undergo rigorous training in Dauntless under hunky and sympathetic instructor Four (Theo James), but also the pierced and extreme douche-bag Eric (Jai Courtney). She makes a series of fellow-initiate friends (Zoe Kravitz and Ben Lloyd-Hughes), but also some enemies (Miles Teller), none of them as memorable as their character counterparts in Harry Potter (Hermione Granger, Ron Weasley, and Drako Malfoy). Throughout her testing, Tris must hide her divergence as the Erudite faction has been hunting her nonconforming kind. Over time, Tris grows from an Abnegation weakling into a fighter under Four’s careful instruction, the romance between them blooming under the surface, though Tris has some apparent intimacy issues that go curiously unexplained within the two-and-a-half-hour runtime. Screenwriters Evan Daugherty and Vanessa Taylor also fail to adequately explore a subplot about Four’s father (Ray Stevenson), the Abnegation leader of this factioned society, beating him as a child.

Underdeveloped subplots aside, director Neil Burger (The Illusionist, Limitless) maintains a strong narrative thrust, while Woodley (from The Descendants and This Spectacular Now) makes the most of her first major starring role in full command of her physical and emotional performance. She doesn’t have the presence or range of Jennifer Lawrence in The Hunger Games and Catching Fire, but she demands that we root for her. James is likable enough, though he looks as if he should be modeling jeans for Abercrombie & Fitch. Together they’re a fine romantic pairing, and the human drama between them makes Divergent worthwhile. Unfortunately, it’s the absurdity of this dystopian world that strains our suspension of disbelief. Breaking up society into five regimented factions with requisite personality traits, specifically designed for the much-preached-about denial of human nature, is so obviously a bad idea that it’s any wonder how such a silly notion was instituted. Then again, Nazism became a reality too, so perhaps it’s not so unrealistic.

Undone by a soundtrack consisting of corny pop music unbefitting to Roth’s post-apocalypse, Summit’s production captures the scope of the proposed world with average-looking special FX. But the world itself is so drab that few opportunities for impressive visual touches present themselves. At least The Hunger Games counteracted the wasteland of District 12 with the ostentatious colors of The Capitol, but no such visual reprieve exists in Divergent‘s dull setup. Nevertheless, Burger capably renders clear and watchable action scenes and balances them with the story’s romantic underpinnings, and thankfully the story doesn’t employ the overused young-adult fiction device of the love triangle. But that’s where the film’s few distinctions end; in every other aspect, Divergent imitates its genre’s predecessors as if closely following a step-by-step guidebook for building an adolescent franchise. Although future sequels (Insurgent in 2015, Allegiant in 2016) are inevitable and assured healthy financial returns, there have been far more compelling metaphors for the trials of adolescence.