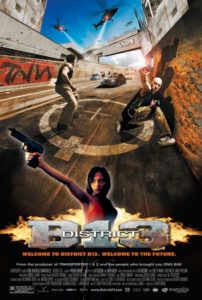 If the movies from French producer Luc Besson’s factory of B-grade actioners, District 13 (Banlieue 13, 2004) stands among the best. This is your typical martial arts-laden action extravaganza, filled with thumping techno music, a thin plot, and impressive stunts. But the increasingly prosaic clichés evident in Besson’s other films, which are also evident here, electrify with an uncommon kinetic energy. The action feels and looks real thanks to its stuntmen stars. The plot seems to have a social resonance behind it. And indeed the French soundtrack of techno and rap augments the no-holds-barred attitude of the movie.

The setting is Paris, 2010, which upon the release of this movie in 2004 was the future. Use your imagination. The city is plagued by unruly slums, and to isolate the problem areas, the government has erected a wall around a particular neighborhood known as District 13. The walls create a makeshift ghetto wherein all schools, all civil servants, and all hope has been evacuated. Inside, two million people are divided into various gangs and the police have no say, except that no one can leave through the guarded checkpoints. Drugs and crime run rampant on the streets within. Meanwhile, Elitist politicians would prefer to wipe this blotch off their maps entirely and start over.

Two heroes ban together to fight both a crime boss polluting the inside and political corruption stewing from outside the walls. One hero, Leïto (David Belle), comes from the slums. After being double-crossed by the local police, Leïto watches as his sister, Lola (Dany Verissimo), is taken hostage by the seedy gangster Taha (Bibi Naceri), and then he’s put in jail for 6 months to rot. Enter the other hero, supercop Damien (Cyril Raffaelli), who is commissioned by his superiors to go undercover, befriend Leïto, stage a prison break, and then use Leïto to sneak into District 13 to defuse a deadly bomb. The bomb was supposedly stolen from the government by the District 13 gangs, but this McGuffin proves to be slightly more complicated. And of course, Damien has only 24 hours to complete his mission.

Nevermind the plot, though. You’re not watching to find out what happens with Leïto, Damien, and the bomb. You’re watching to see the physical bravado of the two leads, as they demonstrate some of the most impressive stunts you’ve ever seen in any action movie. Belle and Raffaelli run across rooftops, leaping from building to building with ease. They scale obstacles and scuttle across walls like Spider-man. Whenever surrounded by a horde of goons, the heroes take them down without a minimum of fuss, exacting fisticuffs with a seemingly effortless precision. Through it all, they keep up a light banter that keeps the tone chummy and enjoyable.

Belle and Raffaelli are actual stuntmen and practitioners of a street-born, pseudo-martial art known as Parkour. According to the definition of those who practice it, “Parkour is the physical discipline of training to overcome any obstacle within one’s path by adapting one’s movements to the environment.” As opposed to a direct defensive strategy such as karate or jujitsu, Parkour involves running and jumping with fluidity, dodging obstructions with competence and speed through a complete awareness of one’s surroundings. But all you need to understand Parkour exists within this movie. The most amazing scenes aren’t those brimming with violence, they’re the chase scenes where Parkour skills are used to escape.

Director Pierre Morel, who would later helm Taken and From Paris with Love for the American market, exhibits clear and decisive action. The editing captures all the movements of Belle and Raffaelli with amazing clarity, whereas action movies nowadays so often rely on shaky-cam to disguise the stuntmen standing in for big-name stars. There’s nothing to hide in District 13, however, as Belle and Raffaelli complete the stunts and the fights themselves. Comparable to Jackie Chan in his heyday, these actors have the charisma, humor, and ability to advance themselves from stuntmen to stars, and they advance this movie from another dull actioner to must-see entertainment.