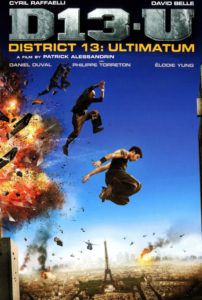 Jumping and soaring across vast expanses along Parisian rooftops is made to look easy in District 13: Ultimatum, the sequel to District 13, the French masterwork of impressive stunts and political intrigue. The movie is another entry in the neverending output of producer Luc Besson (director of The Fifth Element and The Professional), a minor mogul who specializes in actioners with big muscle and small brains. These two movies prove better than Besson’s usual fare by incorporating a negligible commentary about politicians respecting the populace, but they’re best enjoyed for their expertise in the fields of Parkour and ass-kicking.

The mild sci-fi scenario takes place three years after the original, in 2013. The setting itself bears social significance, as those who saw the first will remember. A walled-in ghetto, District 13 remains a sensitive subject politically. No one goes in, and no one escapes. Inside, the unmanageable crime and low-class hoods purvey drugs and death. There was talk in the first movie of making the interior more hospitable, bringing back schools and public transportation, but the criminal element was just too much for the French government to overcome. On the outside, the politicians want it gone, but they understand the power of its two million inhabitants and how appalling simply wiping out the zone would look from a public perspective. Indeed, there’s more than one remark comparing District 13 to Iraq. It’s easier to demolish, rebuild, and profit from the reconstruction than it is to solve the existing problems therein.

The corrupt politicians tried to blow up District 13 in the original movie, but they were thwarted by the movie’s stars, stuntmen-cum-action heroes David Belle and Cyril Raffaelli. The same plot repeats itself here, with seedy members of France’s Secret Service (known as D.I.S.S.) concocting a scheme to make District 13 seem unmanageably bad, forcing the French President (Philippe Torreton) to agree to an evacuation and subsequent demolition of the entire zone. It’s all part of some over-elaborate development deal that’s pointless to explain here. Needless to say, street rat Leïto (Belle) and supercop Damien (Raffaelli) are on the case, teaming once more and bringing their own brand of physical audacity to the scene.

Besson’s screenplay has some hokey points, such as the various race-identifiable gangs (the Blacks, the Skinheads, the Asians, etc.) being brought together by our heroes to fight the government. The story is more comical this go-round, including Damien’s hilarious undercover introduction as a transvestite, or when he uses a priceless Van Gogh painting as a weapon. The finale where the gangleaders receive a big apologetic ‘thank you’ from the President also seems a bit contrived, but then what action movie climax isn’t? That just means there’s more ass-kicking to go around. After all, this kind of movie isn’t watched for the intricacies of the plot. It’s watched for the quality of the action. And the quality here is optimal. Every punch and kick looks painful, as if the poor sap on the receiving end was just impacted by a ton of bricks. Belle and Raffaelli flourish in the scenes implementing Parkour, the discipline where agile movements around complex spaces look impossible but, without a doubt, they’re real.

Off-screen, Besson fought with local cinemas that refused to screen the feature in the troubled neighborhoods most resembling those of within the movie, the target audience, so as to avoid inspiring any copycat behavior. Besson lost the battle and the movie wasn’t screened in the poorer sections of Paris, but that didn’t mean moviegoers in those neighborhoods couldn’t travel to other parts of the city, or simply acquire a bootleg copy of the movie to get their fix. To be sure, making the movie unavailable just created a greater collective desire to see it. Since the plot of the movie concerns The Little Guy banding together against The Powers That Be, the theater owners only impelled the situation through their would-be restriction.

Though District 13: Ultimatum isn’t as easy a recommendation as its predecessor, the two movies will make a strong double-feature. Director Patrick Alessandrin takes over for Pierre Morel—who has since moved on to bigger projects (like Taken) for American audiences—and he captures the action with the same clarity needed to support the remarkable stunts. Belle and Raffaelli prove they should be doing more than merely stuntwork.  Instead, they should branch out into their own starring roles beyond this franchise. Whatever their next project may be, this critic will be there, ignoring the plot in favor of their jaw-dropping Parkour feats.