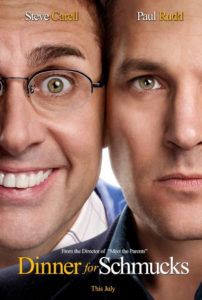 Slobs versus snobs. Nerds versus jocks. Schmucks versus elitist businessmen. It’s all relative. Such familiar comedic tropes have been around forever it seems, and Dinner with Schmucks has no qualms about returning to the realm of the hapless underdog battling for the right to exist against privileged power mongers. Director Jay Roach helms a comedy very similar in approach to another of his movies, Meet the Parents, as both rely on absurdly uncomfortable situations and a protagonist too timid to do anything about them. Though filled with notable stars and plenty of hilarious bit roles, the movie as a whole drags and annoys, and ultimately proves a little two-faced, as the ‘snobs vs. slobs’ setup often does.

After an impressive display of salesman-like ingenuity, lowly 6th Floor analyst Tim (Paul Rudd) receives an invite to a weekly dinner at the home of 7th Floor executive Lance Fender (Bruce Greenwood). Each of the superior office types invited to this dinner must bring a “special” guest. “Special” in this case means idiotic, as the executives have staged this dinner to poke fun at what they consider nerds and losers. Tim thinks the idea is “messed up”, as does his art curator girlfriend Julie (Stephanie Szostak). She threatens to leave him if he goes; he argues that he must in order to get a crucial promotion, and with his fingers crossed he promises he won’t attend.

Tim all but writes off going to the cruel dinner until, by accident, he literally crashes into Barry (Steve Carell), a sweet but unusual guy who makes dioramas of high art and historic events using taxidermied mice, such as his rendition of Louis Pasteur who “invented penicillin”. Barry would be perfect for Fender’s dinner, except Tim’s girlfriend walks out when she finds out he’s going. Then Barry show’s up at Tim’s house and proves to be an utter annoyance, single-handedly ruining every aspect of Tim’s life. But for some reason, probably because the writers wrote him that way, Tim allows Barry to tag along as he attempts to win back Julie and save his job.

The movie is difficult to endure because, like Roach’s Meet the Parents, the scenario evolves from a series of awkward situations into a disastrous snowball effect. Tim is subject to no end of misunderstandings that he’s incapable of explaining away to his livid girlfriend, all thanks to Barry. Take the subplot where Barry inadvertently invites Tim’s stalker Darla (Lucy Punch) over, and in an attempt to correct this mistake, Barry tells Julie to leave thinking she’s Darla. These are nightmare moments that are embarrassing for Tim, so much so that the audience doesn’t laugh as much as groan What next? or shout Oh no! with disbelief. Much of it proves very funny, just for the audacity and ludicrousness of these moments, but at the same time the audience is aware how exaggerated such gags are for comic effect. Making it worse is Tim, who while stricken by Barry’s poor social manners, does very little to stop his behavior, because if he did then it wouldn’t be a comedy.

The setup of Barry’s behavior continually making life worse for Tim feels like an overlong pilot for your average televised situation comedy, somewhere in-between Three’s Company and Perfect Strangers. What’s odd is that despite the title, the movie goes on for nearly 90-minutes before even getting to the eponymous dinner. (Also strange is the conspicuous lack of the word “schmuck” anywhere in the movie, aside from the title. The dinner guests are referred to as “idiots” by the elitist snobs, but never “schmucks”.) This is a long comedy and it feels like a long comedy. Tim meanders around trying to correct Barry’s unintentional mistakes, and trying to win back Julie; meanwhile, the audience waits, wondering When are we going to get to this dinner?

When the filmmakers finally bring us to the dinner, there’s a slew of various “idiots” exploited: a bird trainer with a buzzard; a medium who speaks to departed animals; a blind German fencer; Jeff Dunham. The snobs begin laughing at their guests, who are oblivious to being the butt of the evening’s ongoing joke. Tim realizes this is wrong and defends Barry, and the movie sends the message that the snobs are actually shallow a-holes and the “idiots” are in fact talented, creative, good-hearted people. Then again, the point of this movie is to make you laugh at Barry for being an idiot; likewise, you were supposed to laugh at the nerds in Revenge of the Nerds. As the hypocritical lesson in movies like this teaches, idiots and nerds shouldn’t be made fun of, but boy are they fun to make fun of.

The movie was based on the French film Le Diner de Cons by writer Francis Veber, the same scribe as The Birdcage and Fathers’ Day, two other French-to-English adaptations. This one falls somewhere between Mike Nichols’ splendid rehash of The Birdcage and the utter inanity of the Fathers’ Day bomb. Dinner for Schmucks is certainly watchable, as there are enough riotous cameos to keep audiences interested. Jemaine Clement steals the show playing an oddball artist, basically a wealthy version of his eccentric character from HBO’s Flight of the Conchords. And The Hangover’s Zach Galifianakis makes an appearance as Barry’s mind-controlling IRS supervisor. Carell does a fine job going from obnoxious to sweet-hearted, while Rudd is your standard, boring everyman. Are these performances worth sitting through one frustrating mix-up after another? Did you like Meet the Parents?