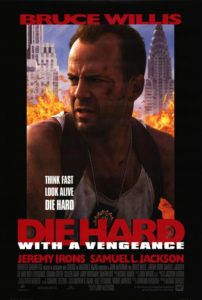 Formula is a joy-killer where sequels are concerned. Great sequels find a balance between referencing their predecessors and at the same time moving on to create something new and expansive. Derived, but not derivative. The ultimate example is Aliens, where James Cameron expanded upon Alien by adding new rules and complexities to the original protagonist and her monster. This film can’t be cited enough; it’s the perfect sequel. In the Die Hard franchise, the 1990 sequel Die Hard 2: Die Harder completely fails to achieve a similar level of innovation, not only by carbon-copying the original’s blueprints but by losing much of the conflict and emotion that were so significant in the original. The style and tone are off, the character John McClane feels emasculated, the action movie terrorists are uninteresting. Fortunately, the same cannot be said for Die Hard with a Vengeance, in which each of these qualities is near spot on. Whereas Die Hard 2 downgraded Bruce Willis’ McClane into your average invincible superhero all-too-common in action flicks, this 1995 release returns humanity to the character.

Born from a screenplay entitled Simon Says by Jonathan Hensleigh, the script was adapted by the writer to meet Die Hard-specific story requirements when it was suggested that his scenario might be ripe for the franchise. Having to change little in terms of the overall scheme, Hensleigh’s script feels truer to the original than any other sequel, strangely enough, by avoiding many of the pitfalls associated with stereotypical blockbuster sequels. Gone are otherwise obligatory appearances Holly Gennero, snooty reporter Richard Thornburg, and McClane’s confidant Sgt. Powell, although the former is referenced throughout. Gone are McClane’s incessant remarks about being in the wrong place at the wrong time. Gone are environmental limitations; the story takes place in all of New York City. And yet, Hensleigh enhances the material by returning McClane to his roots and once again showing the character’s vulnerability. When the film opens, he’s back in New York where he belongs, but his marriage has all but ended, he’s suspended from the NYPD, and the downward spiral that is his personal life thrown in him into near-alcoholism. Oh, and he’s had a bad fuckin’ headache all day.

When we first see McClane, he’s in the back of a police truck, sitting on the floor, recovering from a nasty hangover. We already know a bomb exploded in downtown New York, which in our post-9/11 world is certainly more distressing now than it ever could have been back in 1995. (Watchful eyes will notice an “Atlantic Courier” truck parked outside the bombed department store; “Pacific Courier” was Hans Gruber’s delivery truck of choice in the original film.) Given vague instructions by a German-sounding bomber who calls himself “Simon”, McClane’s superiors were forced to bring him out of suspension to carry out the demands of this madman, who says that unless McClane does what he asks, another bomb will be detonated in a public place. The first mission finds McClane in Harlem wearing nothing but boxers and a sandwich board that reads “I hate niggers”. The film (quite problematically) makes this moment seem more dangerous than McClane’s numerous face-offs against the cadre of expressionless terrorists from Die Hard 2. It nonetheless provides a unique opening. (Note: In the edited-for-TV cut, the message on his sandwich board reads “I hate people”. That a group of African-American gangbangers are so offended by one man’s general hatred of “people” is hilarious.)

Spotted in the street by repair shop owner Zeus Carver (Samuel L. Jackson, lending his signature no-bullshit approach), fortunately McClane is greeted with some understanding when he explains it’s a police matter. Zeus even takes a knife to the arm defending McClane from an angered gang understandably displeased about the sandwich board sign. Hensleigh places racism just under the surface in all of McClane and Zeus’ exchanges, adding a dash of Spike Lee into this action movie yarn. And indeed, you might begin to wonder why in the first three Die Hard films McClane always has an African-American pseudo-sidekick. It’s a curious phenomenon, worthy of analysis, but it seems merely coincidental. Reginald VelJohnson kept McClane’s morale up in Die Hard as Sgt. Powell; though Powell briefly returns in Die Hard 2, engineer Leslie Barnes (actor Art Evans) follows McClane around Dulles, attempting to fix airport communication; Jackson’s Zeus Carver is McClane’s very own Harlem-born shoulder, but participates more than Powell or Barnes. There primarily for comic relief and someone for McClane to talk to while running Simon’s errands, Zeus skews the tradition man-alone Die Hard formula, except oddly works as the perfect supplementary character to McClane. Zeus holds a machine gun, interacts with Simon in a few funny moments, though primarily plays a human sidekick to Willis’ fallible hero.

Not until after another of Simon’s punishing tasks and about forty-five minutes into With a Vengeance do we discover Simon is actually Simon Gruber, Hans Gruber’s brother, and played wonderfully by British thespian Jeremy Irons. Normally a classical actor, Irons pours every ounce of his seedy screen presence into the role, making what might otherwise seem a one-note character seem to drip with personality. Like his brother, Simon has concocted his elaborate revenge plot as a distraction from his real scheme—an elaborate heist to rob the Federal Reserve Bank of New York of billions in gold bullion. Irons’ voice alone sustains Simon Gruber’s presence through the first section of the film; when he’s onscreen in physical form, he becomes almost as lovably villainesque as his brother, his body rail-thin and spidery. Along with a band of Eastern European fundamentalists, obscure Euro-trash all, Simon is the kind of mastermind who betrays everyone involved to get away with the loot for himself.

And indeed he does, for a time anyway. The film’s breakneck momentum sends McClane and Zeus everywhere in the city, completing Simon’s assignments while trying to figure out his master plan. When Simon announces that he’s placed a bomb in one of NYC’s schools, the NYPD (headed by Larry Bryggman, Graham Greene, and Colleen Camp) race out with everyone from firefighters to the “fucking librarians” to find the bomb, and in turn mirrors a post-9/11 perception of how NYC comes together in a time of disaster. New York becomes a primary character; we’re taken everywhere: Central Park, Wall Street, Yankee Stadium, and beneath the city for an awe-inspiring subway explosion—all the film needed was a battle atop the Statue of Liberty for the whole NYC tourist experience. Even better, the entire film is shot on location, so every scene feels authentic. McClane signified the NYPD in Die Hard, served the oft-degraded LAPD in Die Hard 2, and for some reason (which is never explained) he’s back in the NYPD in With a Vengeance. Perhaps America’s affection for New York City makes the first and third films better; we sympathize with McClane more in those two because he’s from a place we’ve all grown to respect as the American city, while Los Angeles is generally expected to fall into the Pacific, unmissed

John McTiernan, helmer of the original Die Hard, returns as director after passing on Die Hard 2 to make The Hunt for Red October, and his skill as a craftsman of cohesive, claustrophobic suspense is evident throughout. Within moments of the film’s start we feel like we’re back in Nakatomi Plaza, except the confines are as huge as a city. When we’re not wondering about the puppetmaster Simon prior to his character’s reveal, the school bomb is always in the back of our minds. There’s a ticking digital timer counting down in our brains and it has the same effect as the inescapable Nakatomi skyscraper. Gradually over these first three Die Hard pictures, McClane’s environment has grown from a building to an entire airport, and here to all of New York City (and eventually Nova Scotia in the finale). Although McClane was confined to the airport in the second film, we never felt the level of temporal or environmental limitation as we do in the first or third entries. Simon’s plan is moving forward every second, with McClane and the NYPD always a step behind, until, inevitably, Simon stops to celebrate in the truncated finale (notoriously reshot and debated over during filming) and the good guys catch up with him. Throughout, the pace is set so frenetically that we don’t have time to worry about pesky action movie buzzkills like logic and plausibility, and instead we just sit back and enjoy the ride.

Some might argue that the physical scope of Die Hard with a Vengeance moves away from what made the first film so great. However, this sequel has enough sense to expand on the original by being its own film, as opposed to unabashedly adhering to all of those components that make a Die Hard film what it’s supposed to be.  Here’s how we know this is a successful sequel: Willis still feels like John McClane, but the story loses the clichéd idea of “Die Hard on a…” that had become frustratingly common by the mid-1990s. By contrast, Die Hard 2’s failure to develop, or at least accurately carry over McClane’s persona from the first was its greatest downfall. Here, aside from the rushed, end note-like climax, this third entry embodies the series’ actionized spirit born in 1988. Overall, it’s a very underrated entry in the franchise, and a film that continues to be great fun whenever it’s revisited.