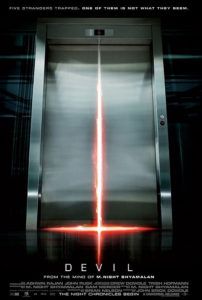 The Night Chronicles is M. Night Shyamalan’s new horror label, under which the writer-director offers up his stories to other talent. Three “chronicles” are planned, although that may change after the first release, Devil, a bite-sized tale of religious terror, inevitably bombs like Shyamalan’s last film, this year’s The Last Airbender. Shyamalan produces and receives story credit while John Erick Dowdle of Quarantine fame directs and 30 Days of Night scribe Brian Nelson adapts the story. But this doesn’t entirely dismiss Shyamalan from any culpability for the outcome, which still feels like an M. Night Shyamalan film through and through.

To be sure, Shyamalan’s increasingly lamentable fingerprints are all over this production, from his frequent cinematographer Tak Fujimoto to the Hitchcockian score by Fernando Velázquez. In fact, these are the film’s two best features, as Fujimoto’s camerawork is flowing and clever, whereas Velázquez’s vigorous score suggests hearty suspense. But the just-plain-bad storytelling doesn’t back up the film’s look or music. Ever since Shyamalan (ridiculously and self-absorbedly) cast himself as the world-saving storyteller in his dreadful Lady in the Water, his evident ego about his storytelling skill has crippled the effect of his movies. Each new Shyamalan film attempts to inscribe some grand purpose, arrogantly hoping to achieve almost mythical heights; and when he fails, the film falls all the further given his lofty ambitions.

Clocking in at 80 minutes, the barely-a-movie presentation of Devil feels like an episode of Alfred Hitchcock Presents or the more recent Masters of Horror series on Showtime. In true Shyamalan fashion, something impossible occurs and it brings a group of strangers together, resulting in a profound twist and a new understanding of the world. Its tale is spun by a skyscraper security guard narrator, Ramirez (Jacob Vargas). Ramirez recalls how his mother used to tell him elaborate stories about Satan playing-out an intricate game with to-be-damned souls. According to his mother’s story, Satan would find five people that were going to Hell anyway, gather them in a confined space, and orchestrate a devious plot that would ultimately prove his existence to a nonbeliever by killing them all. Apparently, this happens all the time. You’ve been warned.

Said nonbeliever is Detective Bowden (Chris Messina), who’s called in when an elevator with five passengers stalls and some bizarre occurrences inside prove too much for the building’s security staff. In the box are an unsuspecting old woman (Jenny O’Hara), a temp security guard (Bokeem Woodbine), an ex-soldier (Logan Marshall-Green), a jumpy young woman (Bojnan Novakovic), and a cocky mattress salesman (Geoffrey Arend). None of these characters are interesting or developed in any significant way, so by the time they start dying, the audience shrugs it off. The elevator lights flicker out, there are screams, and when they flicker back on someone is dead—this happens over and over again. Of course, as Ramirez’s narration explains, the Devil doesn’t want anyone tampering with his fun, so anyone who tries to enter from the outside dies in a freak accident. Yet the staff can do little except watch on the elevator’s security camera to figure out which one of the five is doing the killing. As the paranoia mounts, Ramirez declares one of them must be Satan, a claim that’s dismissed until Bowden’s staunch skepticism is tested by the progressively more impossible situation.

The story relies on annoying misdirections until the final twists come along, which themselves are not surprising since by the time the film’s secrets are revealed so many of the characters are dead. The quasi-supernatural aspects are kept to a minimum until the Devil unveils himself, but by then the film hasn’t done enough to make believers out of us. Perhaps a highly religious audience will find the material more believable, though it’s difficult to imagine anyone buying into this. Shyamalan clearly has a desire to find religious truth through fantastic events, as apparent in his last solid work, Signs in 2002. But, unlike something such as The Exorcist, which will scare the bejesus out of you no matter what you believe, this PG-13 horror film doesn’t give its audience or its characters enough cause to buy its central gimmick.