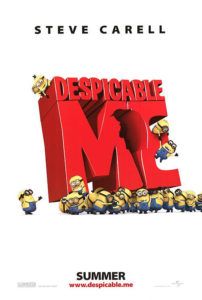 Universal Studio’s release of Despicable Me comes from Illumination Entertainment, a first-time animation company with several in-development projects due in the next few years. Theirs is a typical, commercial brand of computer animation filled with oddly shaped characters, pop-culture references, random disco dancing, and plenty of scatological humor. Comparable to the animation studios at Dreamworks and Fox, they’re interested in telling standard stories in standard ways for mass appeal. To Pixar, there is no comparison. And if their first movie is any indication of how their ensuing work will be, this production company is nothing to get excited about.

It’s not that Despicable Me is a bad movie. When compared to dribble like the Ice Age and Shrek franchises, it’s certainly more watchable. The animation is fine, some of the humor is very funny, but it’s the type of disposable entertainment that leaves you the moment the end credits begin to roll. You describe it as “agreeable” or “cute” to your friends, but only immediately after seeing it, because in a week or so you’ll forget everything about it. There’s nothing contemptible about the movie (except its 3-D presentation in some theaters), but there’s nothing fantastic about it either. That’s part of the problem. The experience is predicable, if mildly enjoyable, but instantly forgettable.

Steve Carell lends a pseudo-Russian accent to his supervillain character Gru, a second-rate villain with lifelong plans to steal the moon. He’s got competition, though, as a new villain named Vector (voice of Jason Segel) undercuts Gru at every opportunity. Backing Gru is an aged scientist named Dr. Nefario (voice of Russell Brand), who can’t seem to hear anything; for example, he makes a “fart” gun instead of a “dart” gun. Gru also has hordes of disposable little yellow Minions, whose unintelligible chatter and wily background antics recall several characters from other recent animated movies (the penguins from Madagascar, the squirrel from Ice Age, and the alien squeaky-toys in Toy Story to name a few).

Gru needs a shrink-ray to shrink the moon and steal it, but Vector has the ray and his evil fortress is just too well guarded. So Gru adopts three young orphan girls—a smart, older girl named Margo (voice of Miranda Cosgrove), a morbid one named Edith (voice of Dana Gaier), and the young cute one named Agnes (voice of Elsie Fisher)—who, in all their innocence, can get into Vector’s lair and sell him some cookies, thus allowing Gru to sneak in robo-cookies to assist with the pilfering of the shrink-ray. Sounds logical, right? But, of course, Gru begins to adore his little girls as a parent would, and suddenly his plans for stealing the moon aren’t so important.

Universal gathered a number of stars from their NBC Universal television programs like 30 Rock and Saturday Night Live to complete the voicework. With celebrities filling the voice roles for every character, it’s difficult to lose yourself in the movie. (It’s also a challenge when Gru announces that he’s stolen the Times Square JumboTron, topped with the NBC peacock logo no less.) Viewers familiar with Carell from NBC’s The Office will instantly visualize Carell’s Michael Scott speaking Gru’s lines; in a way, the characters are much the same, as both pretend to be cool and in control despite their sensitive interior (Carell played yet another similar role in The 40-Year-Old Virgin). Gru says things like “Chillax” and “That’s what I’m talking ‘bout” to sound hip, not unlike how Michael Scott desperately tries to assimilate by making outdated pop-culture references. For once it would be nice to see Carell play a character that isn’t so vulnerable and a little pathetic.

The story plays out as predictably as predictable gets, with every expected plot turn occurring when it should. Will Gru pick the girls over his evil plans? Will he make it to their important dance recital on time? Will he give up being a supervillain to be a good father? What do you think? The answers to these questions are obvious, never once challenging the audience to feel something out of the ordinary. When a film like Toy Story 3, released a few weeks earlier, contained a range of emotions that involved the viewer on multiple levels, this one-note cartoon proves underwhelming.

A few moments in Despicable Me are amusing. The supervillains’ Bank of Evil was “Formerly Known as Lehman Brothers”, and that will earn a good laugh among adults in the audience. Carell’s dry humor is able to come through his accent, which is never explained within the story. There’s plenty of pretty animation involving futuristic gizmos of villainy and a high-flying chase sequence, but the visuals are nothing worth getting excited about. Directors Pierre Coffin and Chris Renaud make a serviceable cartoon in mechanical terms, never pushing the boundaries of where directors like Hayao Miyazaki and studios like Pixar have taken animation before. This is a kids’ movie in the worst sense, meaning children will get the most from the experience. Adults might moderately enjoy it; however, the movie fails to transcend demographics in the way animated movies should.