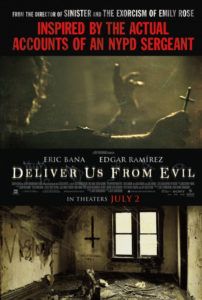 Another horror film “inspired by the actual events,” Deliver Us from Evil draws from the supposed real-life accounts of NYPD officer and subsequent paranormal investigator Ralph Sarchie, who wrote about his experiences in a book called Beware the Night, co-written by Lisa Collier Cool. The degree to which the inspiration remains factual tests the limits of credulity when the film degrades into rampant clichés established both in the horror and policier genres, and concludes with an underwhelming exorcism sequence that feels ripped from a dozen others, foremost The Exorcist (1973). Director Scott Derrickson, best known for familiar material like Sinister (2012) and The Exorcism of Emily Rose (2005), delivers a better-than-average production value accompanied by an interesting cast, but good actors and a decent budget do not a good horror film make.

Eric Bana stars as Sarchie, a grave plainclothes officer who patrols the perpetually rainy neighborhoods of the South Bronx with his adrenaline junkie partner, Butler (Joel McHale, beefed up for the role). Sarchie has what Butler calls a “radar” for criminality, while Butler follows along for the action and heightens his experience by curiously using combat knives instead of a service revolver. Sporting a backward Red Sox hat just to incite a confrontation, Butler is the kind of wisecracking buddy who’s immediately likable and therefore doomed in a film like this, but McHale has a few comical one-liners to lighten the demonic mood before his bloody end. Elsewhere, Sarchie’s wife (Olivia Munn) and daughter (Lulu Wilson) are ignored as he mops up the streets, and yet horror movie law dictates that they’re bound to get involved in the supernatural proceedings too. As the film progresses, Sarchie and Butler investigate a series of seemingly unrelated calls—a domestic disturbance, a woman who throws her 2-year-old to the lions at the Bronx Zoo, and a haunted house—and soon learn each case has more than a few clues in common.

At each location, the same painting company has covered up demonic writing on walls, as put there by war vet Santino (Sean Harris), a menacing hooded figure intent on spreading his evil. An Iraq War prologue finds a trio of American soldiers entering an underground tomb where they discover skulls, some satanic writing, and creepy noises; apparently, the soldiers returned to their neighborhoods possessed by a demonic spirit but in the interim found time to form a painting company. Also on the case is Catholic priest Joe Mendoza (Édgar Ramírez), a chain-smoking, Jack Daniels-drinking Jesuit with a chequered past of drug abuse, who teaches the faithless Sarchie about the underworld of evil. Ramírez is interesting as Mendoza, whose flaws echo the vulnerabilities of Father Karras in The Exorcist. But Mendoza also explains the difference between secondary and primary evil, and suggests that primary evil follows no rules, which means a lot of random stuff occurs in Deliver Us from Evil.

Co-screenwriters Paul Harris Boardman and Derrickson consult their genre guidebook and never deviate, but they also never establish a set of rules for their film’s demon. Indeed, what kind of demon engages in a tactical knife fight with a cop? Or consider the sequence where Sarchie’s child is spooked by a clunky Jack-in-the-Box with its eerily droning “Pop! Goes the Weasel” melody in her bedroom. Are we to believe demonic spirits have chosen to manifest themselves in children’s toys—among them a stuffed owl with an unintentionally funny “ha-ha hoo” sound byte? Or what about the possessed wacko who leaps in and out of scenes, snarling like a quadruped from The Island of Dr. Moreau? And why are the possessed so preoccupied with music and lyrics by The Doors? Mendoza explains early on that demonic writing serves as a doorway for evil spirits, but are the spirits so corny that they’ve chosen to underscore this by embracing Jim Morrison’s poetic circus music?

Derrickson has somehow earned Hollywood’s devotion, despite duds like the remake The Day the Earth Stood Still on his résumé, because his horror efforts have earned oodles. With relatively low budgets, they can turn a profit in a week or two at the box office, creating the illusion of Derrickson’s skill. Elevated as Deliver Us from Evil may seem given its talented cast and serviceable technical presentation, the film is burdened by an unnecessary degree of gore and bloodshed, cheap thrills, and an unbearably predictable story. As a result, formulaic storytelling and glaring plot holes plague a film that tries to balance horror and cop procedural tropes into a half-hearted meditation on Christian faith. Amid cat scares, flickering lighbulbs, failing flashlights, and things that go bump in the night, the material is best suited for ’round midnight audiences with a sense of humor but may prove too dour even for them.