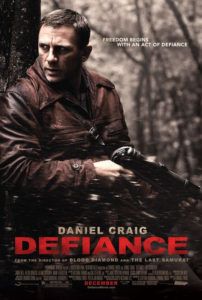 Given the noble and heroic origins of the true story surrounding the Bielski Brothers, partisans determined to save hundreds of Jews from encroaching Nazis by removing them from the ghettos and hiding them in the Naliboki Forest of then-Belorussia, Defiance should have all the trappings of a stirring historical action-drama. Unfortunately, director Edward Zwick, nobly determined to depict the Jews as resistance fighters versus passive victims, tells his story flatly with reductive dictums that seem familiar and tired, even though this story is largely untold.

Four Bielski brothers—Tuvia (Daniel Craig), Zus (Liev Schreiber), Asael (Jamie Bell), and the youngest Aron (George MacKay)—survive Nazi raids, their own families murdered, and escape to the woods to hide, endure, and gather themselves. The Bielskis are known throughout their lands as rebels against local authorities, and their insubordinate nature allows them to carry on whatever the extreme. Others have the same idea to flee into the forest and soon a small community blossoms, complete with do-it-yourself bunkers and huts. Throughout the war, the Bielskis organized around 1,200 fellow Jews, teaching them survivalist ways of defense, relying on “donations” from nearby farms for food and tools, and moving camp whenever enemy patrols threatened to discover them.

The film depicts some conflict between the brothers, as dignified Tuvia believes their staying power is the same as fighting, but the spirited Zus believes in violent retribution. Craig does a fine job as the staid leader defending righteousness, though Schreiber gives the most compelling performance because his character is constantly at ends with himself. Eventually, Zus departs to fight with the Soviet partisans, a more active military group also hiding in the forests but taking a more active stance against the Nazis. They despise Jews almost as much as the Nazis; but Zus just wants to kill Germans, so he tolerates their anti-Semitism in exchange for the opportunity of vengeance. The other two brothers are largely untapped. Asael spends his time crooning his future “forest wife” Chaya (Mia Wasikowska). Aron represents humanist sensitivity, the camera cutting to his face whenever one of the other brothers needs to be reminded of their conscience.

There’s been something of an overload of Holocaust movies in theaters over the past few months; each offers something different for its viewers by way of attitude toward the atrocity. The Boy in the Striped Pajamas centered solely on the victims. The Reader discussed the phenomenon of individual humanism and capacity for forgiveness. Valkyrie attempted to create a thriller without the possibility of suspense, since we already knew the plot to kill Hitler failed. Where Defiance falls short is its script, written by Zwick and Clayton Frohman and based on the 1993 novel Defiance: The Bielski Partisans by Nechama Tec, as the screenwriters have bogged it down with sappy love subplots and melodramatic power struggles within the makeshift community.

Of course, historical filmmaking isn’t supposed to remain jealously devoted to facts. After all, there are moviegoers to entertain! Zwick is ardently devoted to entertainment value, even if it means sacrificing the dignity of his otherwise stimulating story. He has condensed inspiring and important historical truths before in Glory and Blood Diamond, and ignored history altogether with The Last Samurai. But that doesn’t mean those pictures aren’t diverting in the simplest ways possible. His insight, however, leaves something to be desired when he forgoes truly challenging and gravely serious material for such a run-of-the-mill approach.

Defiance manages to keep the viewer barely involved for its 137-minute running time, hanging on to the basics of the human drama and actionized plot through Zwick’s intelligible and straightforward direction. Certainly, the film’s fundamental popular entertainment swing gets the viewer right in the gut. Forgiving the mundane story for its limited capacity may prove more demanding, as the production undoubtedly had the potential to be something grand and epic, but instead chose to be routine. When there’s nothing customary about the narrative, indeed the real Bielskis deserved much more unconventional and artistically worthy filmmaking to tell their story.