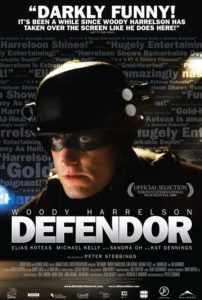 Sweet but a little slow, Arthur Poppington works at a construction site by day, holding the Stop sign and flipping it to Slow when traffic can pass. But at night, he dons a black getup with a duct tape ‘D’ on the chest. Sporting a black helmet equipped with lights and a camera to record his exploits, Arthur goes by the name ‘Defendor’ and proclaims himself a superhero. His makeshift utility belt contains marbles and a small jar of angry wasps to throw at the feet of his enemies. But his chief weapon is an antique WWI trench club for bludgeoning. And though Arthur may be considered lacking in common sense and education, he’s a force to be reckoned with as his hero alter-ego.

Woody Harrelson plays Arthur in Defendor, a pitch-black comedy that falls flat regardless of its potential. The tone and plotting recall something like Lars and the Real Girl, as both are modest movies that rest on the troubling fantasies of a socially inept protagonist. Arthur has no family to speak of, but he’s watched over by the kind Paul (Michael Kelly) and Paul’s family. Misunderstood by people like judges and police, Arthur keeps to himself and works through his issues in his own way. Namely by venturing into the night and stopping crimes as he sees them. Unfortunately, so little exploration is done with the movie’s central gimmick that the audience can’t help but feel robbed by the result.

As Defendor’s pseudo-sidekick, Kat Dennings plays Kat Debrofkowitz, a hooker-with-a-heart-of-gold who also loves smoking crack. She crashes at Arthur’s ramshackle warehouse domicile and feeds him information on a local gang. She’s supposed to be charming, with Dennings incorporating her signature slacker sarcasm into the dialogue, except, her clichéd character is one trope that’s never quite worked outside of a French cinema and the occasional Fellini film. Her information leads Arthur to his ultimate goal of taking down “Captain Industry”, the all-inclusive name for the drug dealers that killed his mother—the event in Arthur’s life that scarred him and made him an emotionally stunted wannabe hero.

Defendor prowls about and finds Chuck Dooney (Elias Koteas), a seedy undercover cop who’s gone to the other side. After dishing out a much-deserved beating to the crooked cop, Defendor is tracked by Dooney’s crew. But when Defendor learns that Dooney has an alliance with Captain Industry, a Russian mobster named Kristic (Alan C. Peterson), he makes it his mission to take down their whole criminal operation. As for Arthur’s motivation, there’s plenty of explanation by looking into his past, as shown when Arthur is interviewed by Dr. Ellen Park (Sandra Oh), a court-appointed psychologist. Much of the story is told in flashback from the interview between Arthur and Dr. Park, after Defendor is arrested by authorities for exacting one of his vigilante beatings.

Harrelson is clearly having a blast in the role, which, coming off the heels of his maniacal performances in last year’s 2012 and Zombieland, feels less out-there than it should. This is the same actor that gave us Natural Born Killers’ Mickey Knox and A Scanner Darkly’s Ernie Luckman, after all. But the problem is not with Harrelson, who does what he can with what he’s given. The problem is with first-time writer-director and long-time television actor Peter Stebbings, who incorporates too many clichés to make the material enjoyable despite its flaws. The ultra-sensitive simpleton, the haloed prostitute, and the crooked undercover cop all present tired formulas that might be dismissed on their own, but when combined, they become insulting as a whole.

Defendor opened a couple of months before Kick-Ass, the more mainstream and more engaging homemade superhero movie of 2010. And though they both involve Average Joe citizen putting on hero garb to save the day, this film proves considerably less actionized and less entertaining that its counterpart. However wacky the story may be, the presentation lends an offbeat quality that might succeed with audiences who prefer low-key to over-the-top, but there are few surprises and even fewer emotional notes to relate to. Harrelson is fun to watch when he’s absurdly taking down bad guys with a homespun arsenal of superhero weaponry, but the material never finds a way of identifying with its audience—a fatal flaw in a movie that, without its star, has little to fall back on in terms of writing or direction.