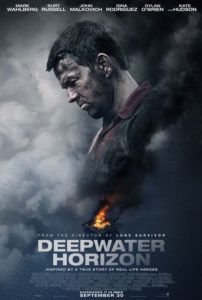 In 2010, the Deepwater Horizon rig disaster left 11 men dead and became the worst oil spill in marine drilling history. 210 million gallons of oil were released into the Gulf of Mexico, which killed thousands of aquatic lifeforms over various species. Scientists are still trying to assess the oil’s impact on life in that area, although lesions, mutations, and premature deaths of sea creatures have all been credited to the spill. Despite two BP executives being charged with manslaughter and dozens of scientific reports attributing the subsequent ecological downturn of the Gulf to the spill, the powerful oil company has faced no criminal convictions and has denied responsibility for many of the environmental effects oil has had on these ecosystems. However, BP has paid billions in lawsuit settlements and fines, but none of the company’s representatives have been convicted of negligence.

Peter Berg’s film Deepwater Horizon covers only the first half of the first sentence of my admittedly truncated, one-paragraph summary of this catastrophe. Setting aside all political or environmental concerns, the director takes a decidedly narrow view on the story and resolves to turn the situation into disaster movie fare. Much like his 2013 based-on-a-true-story actioner, Lone Survivor, Berg’s single-layer approach focuses on a few characters trying to survive a desperate situation. As usual, his technical presentation remains impressive. Using Louisiana locations, plenty of CGI, and some incredible sound design, Berg places his audience in the moment. But experiencing the disaster in a movie theater hardly provides a sense of catharsis or closure, given the event’s aftermath.

Screenwriters Matthew Michael Carnahan and Matthew Sand build effective tension leading up to the incident, using typical disaster movie tropes that cornily foreshadow the impending blowout with underwater bubbles and exploding show-and-tell presentations. Domestic scenes establish chief electronics technician Mike Williams (Mark Wahlberg), who shares a few moments with his wife (Kate Hudson) and daughter (Stella Allen) before going off to his Transocean rig for a three-week shift. When Williams arrives alongside his crew captain “Mr. Jimmy” (Kurt Russell), he finds BP’s anxious execs rushing to complete a job already 43 days behind. Pushing the crew to cut corners is Donald Vidrine (John Malkovich), a corporate villain who could sprout fangs and a forked tongue and no one would be surprised.

Technical lingo and talk of pressure tests lead to the inevitable: a massive blowout, astoundingly rendered thanks to computer effects and some breakneck editing by Gabriel Fleming and Colby Parker Jr. The remaining half of the film follows a handful of established characters as they try to contain the explosion, suffer lingering adherence to protocols, and eventually abandon the rig in lifeboats. With the Coast Guard some 30 minutes away, the workers endure fire and explosions all around them, as well as falling and flinging debris. One gets the sense that Berg and his team researched the actual explosion and attempted to recreate the event in every detail. But soon enough, it’s over, the main characters are safe, and the bad guys do not answer for their crimes.

Given the resulting effects on the environment and failed attempts to hold BP responsible in a court of law, it’s easy to forget that 11 people died. But Deepwater Horizon treats the film’s rig workers with a saintly approbation reminiscent of Clint Eastwood’s treatment of Chris Kyle in American Sniper. The final images show real-life pictures of the men who died in the disaster, ending on a somber and funerary note. I’ll leave it to you to decide if rig workers who escaped a fiery disaster deserve to be ranked among Achilles and Gilgamesh, or meet the monomyth qualifications set down by Joseph Campbell. Suffice it to say, the word “hero” gets thrown around a lot in Berg’s work. What remains undeniable is that the survivors faced frightening and deathly conditions, all of which are recreated with expert cinematic energy in this film.

When Deepwater Horizon first went into pre-production, a more promising director, J.C. Chandor (A Most Violent Year), was at the helm. Chandor left for ever-ambiguous “creative differences” and Berg replaced him, delivering a visceral experience—a cinematic punch-to-the-face. Berg’s films like The Kingdom and Battleship come and go, leaving little to think about beyond the theater; Deepwater Horizon is much the same. It boasts a fine cast and technical display; however, the experience is limited to its 99-minute runtime and considers none of the extensive issues that stemmed from the disaster. But there’s more to the story than Berg shows us, more than the cost of human life, more questions that need answering, more BP censures to be made, and, above all, more unresolved outrage than exists in this film.