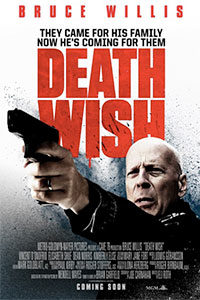 Maybe ten years from now, if we last that long, Eli Roth’s Death Wish will more closely resemble just another lousy Hollywood remake. But at this particular moment, it reeks of poor timing and bad taste. Originally slated for last fall, MGM delayed the release after the October 1 mass shooting in Las Vegas, the deadliest of these events ever to occur in the United States. Given that 30 more mass shootings have taken place since January 2018, it’s unlikely Death Wish would ever find an opportune moment to connect with audiences. What remains is a resounding right-wing, pro-gun message that somehow complains about the number of shootings (90 per week) in Chicago yet resolves its criminal conflict with an assault rifle.

Director Eli Roth (Hostel) works from a script by Joe Carnahan (The Grey), which was rejiggered and toned down by uncredited screenwriters on orders from the distributors at MGM. Carnahan has since spoken out about the resulting film, which rethinks the Charles Bronson starrer from 1974, based on the 1972 book by Brian Garfield. The Bronson original was a lowbrow version of Straw Dogs (1971), Sam Peckinpah’s tale of suppressed leftist rage. It followed Bronson’s yuppie, peace-loving Manhattan accountant whose wife is murdered and daughter is raped by stereotypical 1970s New York scumbags. Roth moves the proceedings to Chicago, avoids the rape, omits the racist casting of thugs, predictably piles on the gore, and puts a lifeless Bruce Willis in the lead role.

Willis plays Paul Kersey, a cool-under-pressure ER surgeon living on the same street as John Hughes’ most privileged characters. Indeed, everything’s working out for Paul: His teenage daughter (Camila Morrone) was accepted into NYU, his wife (Elisabeth Shue) just received her PhD, and his fuck-up-of-a-brother (Vincent D’Onofrio) might finally get a job. If The Beach Boys’ “Don’t Worry Baby” on the soundtrack didn’t already confirm it, life is swell for Paul and his family. But his white, upper-class existence all comes crashing down when a trio of hoodlums breaks into Paul’s home, killing his wife and leaving his daughter in a coma. Inconsolable, Paul receives some advice from his nutty father-in-law (Len Cariou), who dispenses the life lesson after shooting at poachers on his land: “People rely on the police to keep them safe. If a man wants to protect what’s his, he has to do it himself.” Somehow Paul translates this into picking up an unregistered handgun and then unleashing vigilante justice on the streets, killing criminals (two carjackers, a drug dealer, etc.) as a form of therapy. In due time, he tracks down and murders the goons responsible for breaking apart his family. Vigilante justice is served.

Watching Death Wish reminded me of an early episode of The Simpsons in which Moe the bartender chases away alien invaders Kang and Kodos with nothing more than a board with a nail in it. “That board with a nail in it may have defeated us, but the humans won’t stop there,” Kang predicts. “They’ll make bigger boards and bigger nails. Soon they’ll make a board with a nail so big it will destroy them all!” The film never addresses the subject of escalating responses to violence. Paul solves his problems not by alerting authorities when he locates the men responsible, but by arming himself to the teeth and hunting them down. Death Wish is a bloody fantasy in which the hero never learns that essential lesson—violence begets violence—which provided the center of a much more thoughtful and introspective revenge story from last year, Three Billboards Outside Ebbing, Missouri. Rather than acknowledge such discussions in the story, Roth inserts ungainly sequences of talk radio personalities—between Chicago-based shock jock Mancow and SiriusXM host Sway—who debate the moral and social implications of a white guy in a hoodie shooting a black drug dealer in the street. The effect is not unlike a traditional chorus, albeit without the poetry or high drama of a Greek play.

Roth, meanwhile, takes a hard line in support of the Second Amendment and, well, anything that doesn’t fit his narrow definitions of manhood. He’s known for embedding conservative views into his films. Take his 2015 cannibal movie homage, The Green Inferno, about a bunch of college students who get punished for caring because, as one of them notes, “Activism is so fucking gay.” In Death Wish, Dean Norris plays one of the detectives on the case, and his sole character trait involves his enduring struggle to eat right. He resolves that organic protein bars are inedible, while real red-blooded Americans eat bear claws. Apparently, they also hide assault rifles in decorative furniture. Every time Roth implies audiences should make up their own mind about gun violence, he aggrandizes Willis’ badass mode by setting it to AC/DC’s “Back in Black.” Unfortunately, Willis gives a mostly lifeless performance, per usual as of late, and the concentration of manly violence over emotions translates to utter disinterest for the viewer. The wildly miscalculated release of this film is only matched by its mindless aggression.