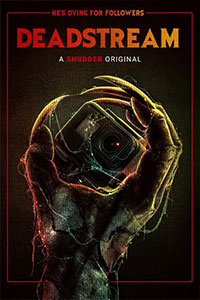 More than twenty years have passed since The Blair Witch Project (1999) and over forty years since Cannibal Holocaust (1980), so it’s surprising to know the found-footage horror movie hasn’t lost steam. From the ongoing anthology series, V/H/S, to the low-budget fare that comes and goes every year, only a few examples from this subgenre have stood the test of time. Still, they’re an effective tool for a young filmmaker to demonstrate how much they can do with few resources and a limited framework—and it seems as though every aspiring horror maestro wants to become the next Adam Wingard, going from a shoestring segment in V/H/S to helming the mountainous Godzilla vs. Kong (2021). Not many have made that leap. But if I had to put my money on someone, it would be Joseph Winter and Vanessa Winter, the married team that wrote and directed Deadstream, their feature debut together.

Deadstream, which premiered earlier this year at the SXSW Film Festival, debuts on Shudder just in time for Shocktober. It marks the arrival of the Winters, who don’t exactly reinvent the found footage subgenre, but they deliver a worthy variation on a theme. Besides writing and directing, they also edited, produced, and supplied the music for their freshman effort. Joseph also stars, playing Shawn, whose “Wrath of Shawn” livestream show consists of Shawn subjecting himself to risky and stupid stunts for our entertainment. Shawn had a major following until a scandal left him nearly canceled, with no sponsors and a shaken fanbase. In a desperate attempt to win back his audience, shake his disgraced reputation, and satisfy his new financiers, Shawn agrees to spend a night alone in “Dead House,” an abandoned old home with a creepy origin and a history of recorded paranormal activities. If he leaves or fails to investigate a scary sound in the dark, his sponsors can back out. So he protects himself from himself and removes his vehicle’s spark plugs, then locks himself inside.

What works so well about Deadstream is Shawn’s fraidy-cat personality, hilariously captured by Winter in overreactions and high-pitched screams at spiders. Shawn freaks himself out by playing cliché horror movie music on a small tape recorder, and his frantic reactions to warning signs around the house become a constant source of humor. To catch the action, Shawn has a camera directed at his face, practically up his nose, and another mounted on his head for POV shots. Then he sets up a series of night cameras outside and around the house, which he monitors on a device. Besides exploring the dilapidated house and recounting its history of suicides and mysterious deaths, Shawn also spins his “Wheel of Stupid Things” that prompts him to carry out bad ideas, such as using a witchboard. All the while, his live audience offers commentary, ranging from mean-spirited remarks about Shawn’s acne scars to “Get out of there” warnings. 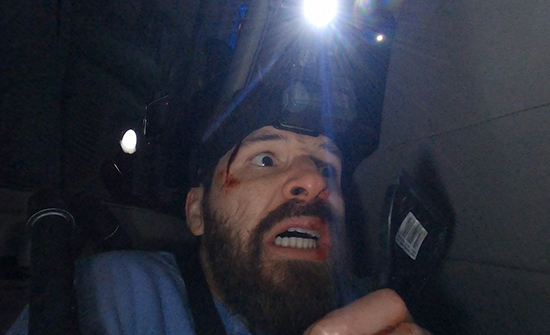 But Shawn isn’t exactly a virtuous character. His egocentric obsession with followers and sponsors means he plays for the camera, as any good livestreamer does, making him rather hollow. Moreover, the reasons for the shaky state of Shawn’s career gradually reveal him to be a less than savory person. Still, there’s something about Winter’s ridiculous, hides-in-the-closet behavior that endears the viewer to Shawn, warts and all. It’s also funny when he cannot help but make scary situations even worse. While performing a seance, he announces ironically, “Red Rover, Red Rover, send dead babies right over,” as if to conjure them out of a horror movie. Later, he finds a small hole in a wall that leads to hidden stairs, recalling a scene from this year’s Barbarian, and he must go down them. In more ways than one, he’s his own worst enemy. When a fan named Chrissy (Melanie Stone) appears on the scene and draws the favor of Shawn’s viewership, the situation becomes more complicated, and Shawn’s desperate need to maintain the spotlight becomes more apparent.

The Winters manipulate the situation to riotous effect, delivering a horror-comedy tone that begins like an update of The Blair Witch Project, reliant on mood and unseen specters in the night, but soon becomes a Sam Raimi-level shockfest—complete with copious amounts of blood, gore, monsters, and slapstick humor. And like Raimi, the Winters’ technical presentation is particularly inspired. Consider how the filmmakers use multiple cameras: Shawn has placed one camera out in the hallway, and while in another room, he sees an apparition on his device’s view of the hallway camera. Obligated to investigate, he does so and sees nothing, but the figure still appears on his screen. The Winters transition from one view to another, building tension with each move, until a scream-inducing encounter. Later, when Shawn finds himself chased through the house by ghouls, he manages to mount a camera on a zombie’s head for a comic sequence. It’s moments like these that make Deadstream a consistently fun and engaging watch.

If their homages to The Evil Dead movies occasionally feel too obvious, the Winters prove they understand the careful balance of scares and goofy humor with finger-up-the-nose glee. Indeed, Shawn reminds us of Bruce Campbell’s Ash Williams, without the muscles—he’s a relentlessly cocky and flawed person who perpetuates his bad luck, often in comical ways. You like the guy and want him to survive, but you kind of want to see him pulled through the muck (or in Shawn’s case, the black pond water). Given the found footage setup, Deadstream ends as you might expect, but then again, that’s another nod to Raimi, isn’t it? In any case, the Winters have delivered a deliriously entertaining, thrill-a-minute experience that’s full of creative tricks and comic setups. In a subgenre that often leaves the viewer unsatisfied, Deadstream reminds us that the right filmmakers and approach can revitalize any scenario, no matter how commonplace.