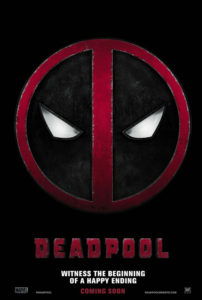 Produced by “Asshats” and directed by “An Overpaid Tool”, Marvel’s Deadpool thumbs its nose at everyone except comic fans. From the hilarious opening credits to the post-credits scene inspired by Ferris Bueller’s Day Off, referential irreverence explodes onto the screen. Longtime special FX supervisor Tim Miller makes his directorial debut for this snarky, R-rated, meta-styled comic book film—not to be confused with a superhero film. If you read X-Men comics in the 1990s, chances are you heard of Deadpool, a horribly scarred, well-armed, and unremitting killer whose disturbing origins left him so crazed that he even had knowledge of his own presence within a comic book; or in this case, a Hollywood film. Playing the titular smart-ass is Ryan Reynolds, who also produced, and who speaks to the audience by breaking the fourth (and sixteenth) wall. Reynolds’ character mocks his real-life counterpart and even the distributing studio, Twentieth Century Fox, who have made an essential entry in their ever-expanding X-Men franchise. And perhaps best of all, amid the bloody violence and naughty language, Deadpool also happens to be a love story that bonds us to the character.

The foul-mouthed Marvel character debuted in 1991 in the pages of an X-Men spinoff called The New Mutants, created by Fabian Nicieza and Rob Liefeld (who are thanked “with tongue” in the credits), which soon evolved into the tougher X-Force. Opposite X-Force’s gun-toting, time-traveling leader Cable, Deadpool was an archnemesis and mercenary who gradually transformed into a loveable anti-hero. He’s also one of many characters in Marvel Comics to have been artificially enhanced by the clandestine Weapon X program that shaped everyone’s favorite X-Man, Wolverine. Imbued with an uncanny ability to heal from any wound, even decapitation, Deadpool might live forever. He’s also usually armed to the teeth with swords, guns, you name it. But there was always a question of Deadpool’s mental state in the comics. Psychologically and physically disfigured from his horrible Weapon X experiences and having died more than once, the character is insane, strangely aware of his non-reality as a comic character, and a cheeky bugger, earning him the fitting nickname “Merc with a Mouth”.

Development on a solo Deadpool adaptation began over a decade ago, but there was no real traction until X-Men Origins: Wolverine debuted in 2009, when Reynolds played a version of Deadpool whose mouth was sewn shut (rendering the whole purpose of Deadpool inert). Although few could deny that Reynolds was a perfect choice to play the wise-cracking character (he played a similar role in Blade: Trinity), fans protested to the character being ostensibly neutered. Indeed, most felt a Deadpool film could only be R-rated to do the character justice. And only after visual FX company Blur Studios leaked a profanity-laced action sequence online, supposedly by accident, did Twentieth Century Fox agree to produce the film as Reynolds and fans everywhere wanted. With a screenplay by Zombieland writers Paul Wernick and Rhett Reese, the R-rated film may as big a budget as your average X-Men sequel, but its smaller budget more than gets the job done. And thankfully, aside from the sardonic appearance of a Deadpool toy from X-Men Origins: Wolverine, the character has been rebooted completely. 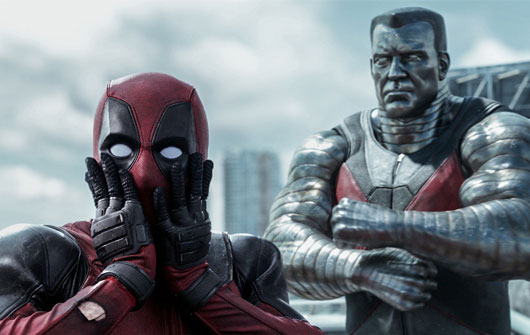 Structurally, the film cross-cuts between Deadpool’s current mission of revenge on someone named “Francis” and his recapping his own origin story for the audience. We open with Reynolds as the good-looking Wade Wilson, a former soldier-turned-sharp-tongued-mercenary who works out of Sister Margaret’s Home for Wayward Girls—a front for a shady merc dive run by Weasel (T.J. Miller). Here, he meets Vanessa (Morena Baccarin, from Firefly), a prostitute whose golden heart is melted by Wade’s equally perverse charms. They’re a match made in coital heaven, illustrated by a montage of sex scenes that celebrate various holidays, from Valentine’s Day to International Women’s Day (with the help of a strap-on, the film nods at Deadpool’s famously open sexuality). When it turns out Wade has terminal cancer, he painfully leaves Vanessa and pursues a cure promised by a heartless scientist Ajax (Ed Skrein, from The Transporter Refueled). Ajax plans to ignite dormant mutant genes that will heal Wade, and in the process turn him into a killing machine.

After a series of torturous procedures, Wade looks like a hairless burn victim or something you’d find on a pizza. He has a healing power that could rival Wolverine’s and enhanced physicality, which he uses to escape Ajax. But he’s also been defaced and refuses to go back to Vanessa until Ajax can undo what he’s done. And so, renaming himself Deadpool and donning a red-and-black leather getup that hides his bloodstains, our ever-quipping hero seeks revenge on Ajax, whose real name is Francis. But Ajax is backed by countless disposable goons, including the super-strong mutant Angel (MMA fighter Gina Carano, from Haywire). Meanwhile, Deadpool has a couple of X-Men on his tail: the well-mannered and metal-skinned Colossus (Stefan Kapicic), and the moody teen girl whose name, Negasonic Teenage Warhead (Brianna Hildebrand), suggests her mutant power. Hilariously, Deadpool observes how there’s a giant X-Mansion but only these two mutants are ever inside, almost like the studio didn’t want to pay for more actors. The film’s knowing, winking sense of humor (often laced with sexual and scatological gags), guides Deadpool to its certain favor among fans.

Having played various comic book roles over the years (including a particularly awful turn in Green Lantern), Reynolds has long professed his affection for the Deadpool character. It’s a role he was born to play—a crazed combination of the actor’s physicality and his knack for sharp humor, first acknowledged on National Lampoon’s Van Wilder. The writers, aptly credited as “The Real Heroes Here”, poke fun at Reynolds’ early career attempts at superherodom, as well as his former status as People magazine’s “Sexiest Man Alive”. The references to Wham!, Hugh Jackman, Spin Doctors, and Sigourney Weaver keep the audience laughing so much, sometimes it’s difficult to hear the rapid-fire dialogue over the laughter—in a way, the film requires multiple viewings. Director Miller and editor Julian Clarke also create a frenetic pace to the action, delivering it in bursts of viscera and fast, super-powered violence, all set to music by Tom Holkenborg (aka Junkie XL).

That Deadpool was ever made is something of a small miracle. That it’s satisfying from a fan perspective is another miracle. Fox can hardly be considered risk-takers when it comes to the X-Men franchise. Their serviceable efforts have gone from quite bad (X-Men: The Last Stand) to really good (X-Men 2), and Deadpool belongs in the latter spectrum. Reynolds has said more than once that fans made it happen, and fans will undoubtedly lead to its success—and sequels. Hopefully this begins a new age of Fox listening to fans, or at least better anticipating what they might want, as Marvel’s Avengers-verse has so successfully done. On its own, Deadpool is a wonderfully fun and fast-paced origin story for adult comic fans; as part of Fox’s larger X-verse being adapted to film, it’s a matchless and shining example of how to stay true to a character, no matter how extreme.