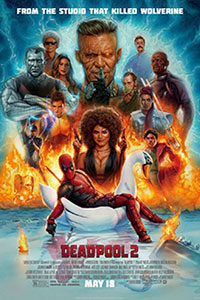 Ryan Reynolds returns as the scarred mercenary-turned-anti-hero Wade Wilson, aka Deadpool, in Deadpool 2, a follow-up to the long-gestating original. Twentieth Century Fox broke superhero precedent with their release of a hard-R film in 2016, based on the popular Marvel comic book character, demonstrating that the target audience for superhero fare isn’t limited to teenagers. The foul-mouthed, ridiculously bloody, and downright morbid antics of the self-aware character allowed for meta-commentaries throughout, including fourth wall breaking and his persistent knowledge that he’s a character in a movie, like an ultra-violent Looney Tunes character on cocaine. Besides perfectly suiting Reynolds’ wiseacre talents as a performer, the first film, as well as last year’s Logan, demonstrate Fox’s willingness to take risks on their otherwise scattershot and inconsistent track record with X-Men characters. Ultimately, Deadpool 2 is just a little less funny, a little more exciting, and not altogether as polished as its predecessor. (Since some of what wobbles about this film resides in the plotting, which will be discussed in some detail. Readers who wish to remain spoiler-free should return after their screening.)

The film starts with a rather odd mixture of suicide and exposition, establishing a familiar nonlinear narrative structure that begins at a dramatic high point in the middle, allowing Deadpool to use flashbacks to explain how and why he’s opted to blow himself to smithereens atop several drums of flammable liquid. The simple explanation is that his assassin-for-hire antics have followed him home, and the love of his life, Vanessa (Morena Baccarin), dies in the crossfire. Inconsolable, Deadpool hits bottom, but his super-healing mutant power prevents him from dying, even in a massive explosion. Trying to give him some direction, the metallic X-Man named Colossus (voiced by Stefan Kapičić) attempts to convert Deadpool into a respectable hero at Professor Xavier’s School for Gifted Youngsters, to no avail. Their first mission to talk down Russell (Julian Dennison, from Hunt for the Wilderpeople), an angry teenage mutant who tosses fire from his hands, ends in Deadpool shooting someone through the head and getting himself and Russell locked in a supermax prison for mutants.

Meanwhile, a concurrent plot strain follows the silver-haired Cable (Josh Brolin, playing a character with parts of Snake Plissken and The Terminator), Deadpool’s arch-nemesis and sometimes partner—and occasionally the object of his affection in the comics. A time-traveling cyborg with a tragic past, Cable has returned from the distant future to kill Russell, who grows up to become a mass murderer. Deadpool reluctantly protects the boy, while also resisting Russell’s obvious attempts to make the anti-hero his surrogate father figure. In a plan to rescue Russell and stop Cable, Deadpool forms his own superteam, the X-Force, comprised of the luck-enabled Domino (Zazie Beetz) and a handful of others. The execution of their first mission together may be the funniest moments in the film, leading to some unexpected characters, gristly-funny violence, an unlikely alliance, and eventually a thrilling climax comprised of CGI fights and surprising emotional stakes. 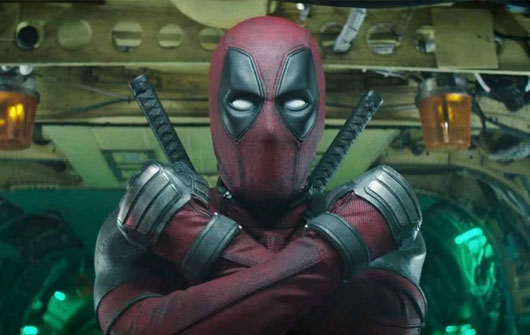 Much like the original, Deadpool 2 concerns itself with humor first, action second. Writers Rhett Reese, Paul Wernick, and Reynolds maintain a balance of self-awareness and a desire to provoke. They conceive some hilarious and memorable moments of gross-funny gags, such as one where Deadpool finds himself growing a new body from the waist-down. And they also inject plenty of Easter eggs and nods to the comic mythology, such as making throwaway use of beloved characters or finding a smart way to introduce Deadpool’s black and gray costume. Once more, Deadpool aims his comic barbs at the X-Men, including their conspicuous absence from this film, and especially Fox’s mishandling of the X-Men characters in previous iterations (such as another callback to the mouthless appearance of Deadpool in X-Men Origins: Wolverine). He also delivers several blows to Warner Bros.’s DC Extended Universe, much to our delight. Reynolds’ dual action hero and comic personas combine perfectly here; it’s the role he was born to play. His near-constant commentary provides a lot of fun and, next to the motormouthed antics of Deadpool, Brolin’s straight man routine as Cable plays wonderfully (though the character deserves his own film given the intricate backstory from the comics). Beetz also has a welcome sarcastic presence, even if it’s an underwritten role.

But the writing is less consistent than the original, which chose to tell its entire story from Deadpool’s perspective. The scenes with Cable alone, for instance, lack Deadpool’s voiceover or jokey remarks, and so they feel disconnected from the rest of the film. Additionally, to maintain the emotional stakes throughout, the writers introduce a near-death experience trope where Wade finds himself in an underwater afterlife (you know, to symbolize his emotional suffocating), unable to break through an invisible wall to reach Vanessa. She speaks to him from the beyond, assuring him that when it’s his time, they will be reunited. These scenes—along with exchanges where Wade and Vanessa talk of having a child—are earnest, corny, and cliché in an otherwise self-aware film whose meta-humor curiously avoids pointing out their cheesiness. They feel grossly out of place. Who knew Deadpool was so spiritual or parental? That the character never points out how silly and sentimental these scenes are was a significant misstep, whereas the most intimate scenes in the original function as both endearing and comical (such as the “Calendar Girl” sequence).

Fans of the narcissistic, self-deprecating, ever-quipping merc in red will undoubtedly enjoy the sequel. It’s a massive production that once more feels intimate and personal, with excellent superhero action scenes (courtesy of John Wick co-director David Leitch) and a cast of well-known comic characters, some of them making their first appearance onscreen. Best of all, Deadpool 2 doesn’t rest on its protagonist saving the universe; its plot has been limited to saving the fate a young boy, which is admirable when every other superhero film requires the fate of all existence to hang in the balance. Of course, Fox isn’t Marvel Studios (though the intellectual properties of both studios have now been purchased by Disney), and their treatment of X-Men characters and timelines has been confusing and inconsistent, to say the least. Several films, including Deadpool 2, have had to (or at least tried to) reset or correct timelines so audiences make sense of the poor writing and creative decisions of the past. As a result, some of the most inspired moments come during the end credits, where the film openly acknowledges these issues. It’s an apt metaphor for Deadpool 2 as a whole—an entry in an expansive, albeit muddled franchise that takes some uproarious and self-conscious strides to correct past mistakes. Although less cohesive and more meandering than the first, it’s an entertaining sequel that pushes the franchise forward.